I'm pretty sure this is one of my own names, and no drag queens currently perform as "Valeria T.," but I still found Twitter, Flickr, Yelp, YouTube, Facebook, and other accounts on-line under this name, so who knows. The intended reference doesn't really have anything to do with anything and isn't even the right color, so 1103's a lot more likely than most seedlings to get her name changed at some point, but she's Valeria for now. And this is what she looks like: 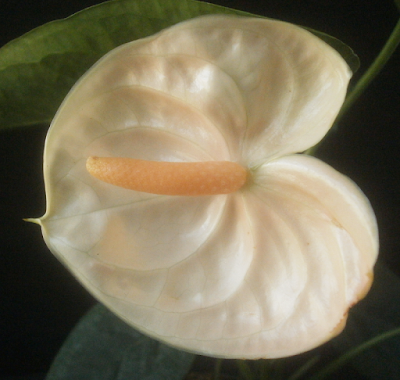 In person, this is a very difficult color to pin down, and it changed over time besides: immediately after opening, it seemed like a very, very pale yellow, but that turned to a pale pink or orange (depending on the lighting), then white, and then greenish. Because it was so pale, I wound up taking a lot of photos, to try to come up with an objective consensus on the actual color, which means I can show you the whole progression: 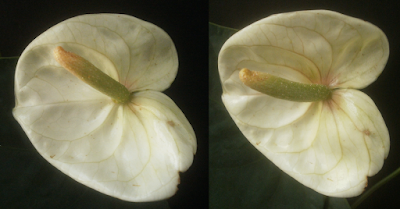 September 9 (L) and 17 (R).
I feel like the photos pretty much speak for themselves; I'm not sure what I can add. Obviously I'm pretty happy to have a spathe so large and blistered, and that's before the unusual color, which is maybe -- just maybe -- even yellow. Technically.

Valeria's seed parent was 'Midori;' obviously I'd been hoping for some interesting genetic contributions from 'Midori,' but this is more than I'd hoped for. Both develop a light pink blush near the center of the spathe with age, both have very large, rounded spathes with heavy blistering. The spadix is the only real clue I have to the pollen parent: on 'Midori,' the spadix starts green, becomes white, and then reverts to green, whereas Valeria's progression is yellow-white-green. That's not much of a clue, since about half the Anthuriums that have ever been in the house have had yellow spadices at one point or another, but it's all I've got. 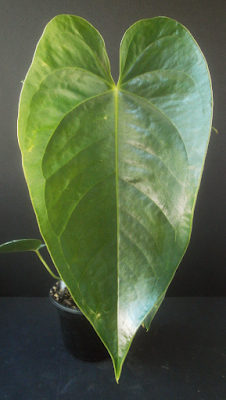 both tend to produce a few very big leaves, instead of a lot of smaller ones, and both are very waxy, leading to a slight blue sheen to the leaves sometimes, if you look at them from the right angle. Neither plant offsets worth a damn either. 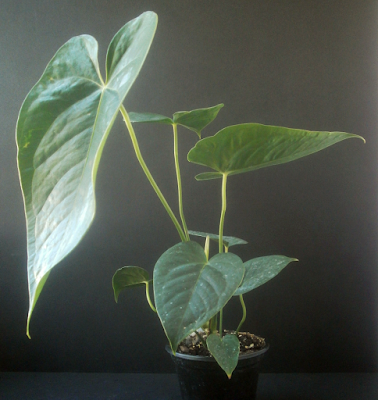 Valeria's spathe does show some thrips damage in the later photos, but seems to be fairly resistant to thrips all the same -- the damage is mostly just tiny pinpricks that wouldn't even be visible on a darker color; judging from the photos, the one large spot was present as soon as the spathe opened, and might be some other kind of damage, instead of thrips. Not sure.

'Midori' produced three groups of seedlings before dying, the CS, CZ, and DP groups. Valeria T. is the only survivor from CS; none of the CZ seedlings made it, and there are only three DP seedlings (1268 Li'l Miss Hot Mess, 1357 Dayonna Hilton, and 1476 Anya), so it's maybe going to be a struggle to keep the 'Midori' genes going. I've tried to pollinate Valeria, but no luck so far. I don't think this means I can't; it probably just means I need to pay more attention. There's a new bud almost open as I write this (19 September), so it looks like I will have an opportunity to try again soon.

Oooh! So pretty! I would definitely buy it if it ever goes into production.

I absolutely agree - she's utterly drop-dead gorgeous in my opinion!