So, I have good news and bad news. The good news is that the average quality of the photos I post here will probably, and I stress probably, improve in the next few months. The bad news is that A) it might not, B) even if it does I'm not sure you'll actually notice, and C) it's because the camera I'd been using for the last few years abruptly died on me this week and I've been scrambling to find an affordable new one.1

I have posts scheduled, and the photos for those posts have already been taken, but it looks like I'm going to have trouble writing the text to go with the photos for a while, because the camera-replacement process has eaten up a lot of time and energy and now I'm behind on watering and everything else. And I still have to figure out how to use the new camera. So I expect the post frequency to fall off for a while, until everything's back to some approximation of normal.

But for today, we have Helena. "Helena Handbag" is one of those drag names that gets a lot of use but doesn't belong to any particular performer. The sort of name you come up with on Halloween night when you're in drag at the karaoke bar, waiting your turn to rock out to Alanis Morisette's "You Oughta Know" or whatever. So I could probably dig up a video or a web page or something having something to do with Helena Handbag, but it'd be pointless, as there isn't really a Helena Handbag:2 we are all Helena Handbag.3 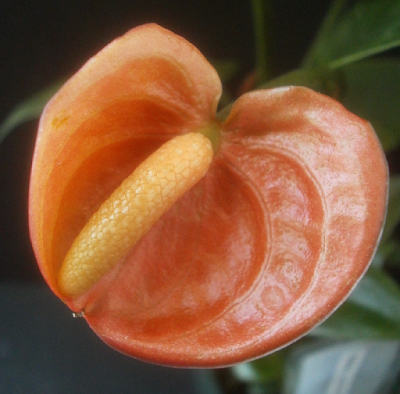 Helena is another seedling from 0330 Faye Quinette (previously: 1594 Roxy-Cotten Candy), and she resembles her mother pretty strongly. The most obvious difference so far is in the foliage; Helena's is much flatter, with smaller, less visible veining. 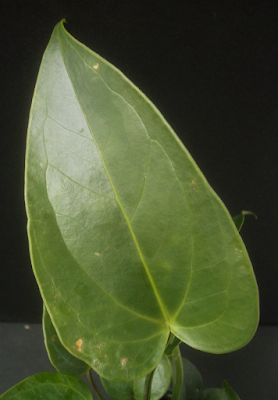 Both Faye and Helena have green veins on the backs of the spathes, though it's less intense on Helena. (This may just be a first-bloom thing.) 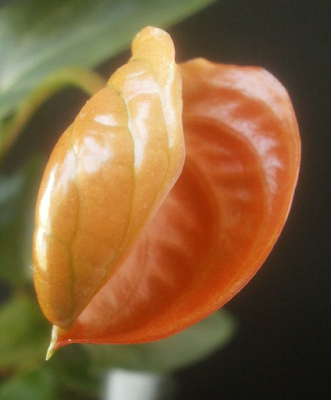 The full-plant photo is substantially out of date by now; Helena's grown more and larger leaves since it was taken. 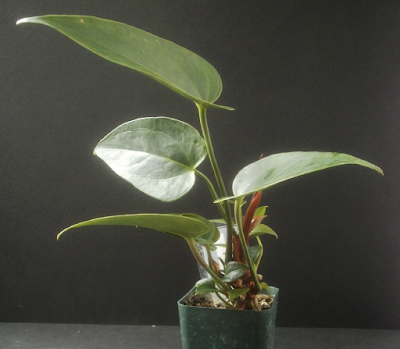 In any case. Thrips damage is pretty minimal on the leaves, and the spathes are a color that would hide thrips damage well anyway, but aside from a spot at the top in this photo, 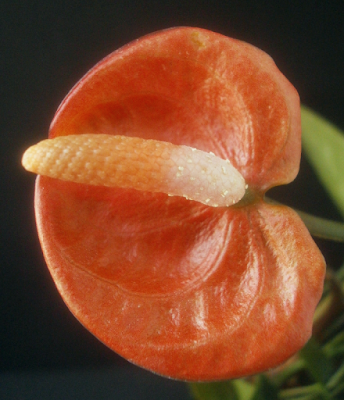 the thrips seem to be leaving the spathe alone anyway. So that's good.

As I've mentioned before, 0330 Faye Quinette isn't doing great lately. The foliage seems to have Xanthomonas, and although it doesn't seem to have gotten to the heart of the plant yet, and it's theoretically possible that the plant will recover if I remove the affected leaves, I'm not terribly optimistic about that. So it's nice to have some similar-looking substitutes like Helena and 1727 Mercedes Sulay around, just in case. 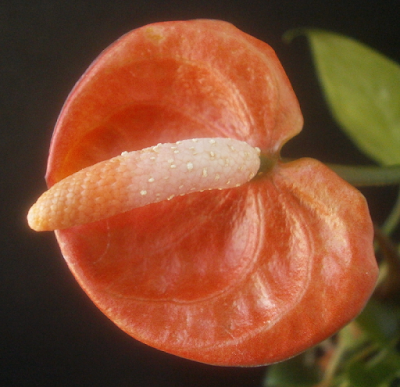 Another seedling from the FE seedling group has bloomed (1679 Madison Adjective -- prettier, but less interesting), but we won't get to it for a while yet.


1 Which was technically unsuccessful. I found and purchased a new one, but "affordable" is a stretch.
2 Also in this category, as far as I know, are "Ida Slapter," "Robyn Banks," "Heywood Jablome," and pretty much anything you want to pair with Ivana or Anita.
3 More than usual, lately, even.
Posted by mr_subjunctive at 3:00 AM