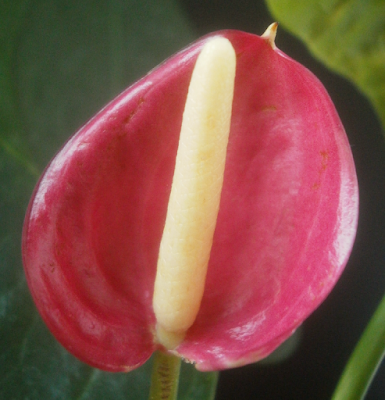 I like Zaria's color, though it feels kind of unlucky. I suppose a lot of the seedlings of any given color wind up getting thrown out, but it feels like the purple-reds and purple-pinks do so more often. Maybe it just feels worse because it's an interesting color. 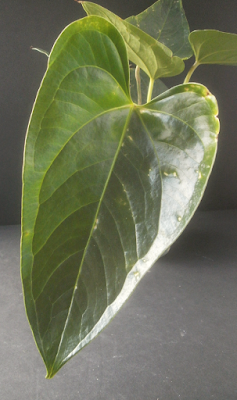 but thrips are kind of a problem on leaves and spathes both, 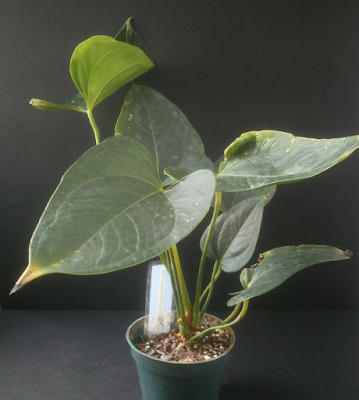 so it's probably not a good idea to get too attached to this one. 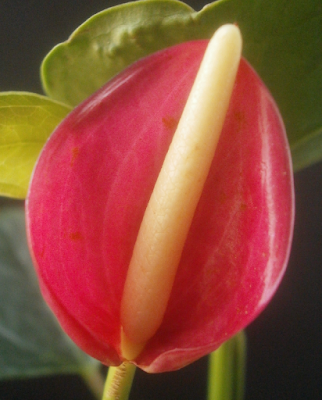 Zaria's a late first-generation seedling; the seed parent was 'White Gemini.' She's one of the better seedlings from the CB seedling group, though that's not saying a whole lot.2 At this point, it looks like Zaria's the only CB seedling that could live long enough to reproduce, and I wouldn't bet money on that happening. We'll see.

The next post will be about 1419 Maya Douglas. I don't promise beauty, but she's at least something we haven't seen before.


1 This might actually work, kinda: I treat Anthurium and Schlumbergera similarly. More or less the same soil mix, same watering schedule, same lighting. In the long run, I suspect one plant would crowd out the other, but I bet it would be possible for them to share a pot for a while. If you were into that sort of thing.
Not sure whether the colors go together, though. I mean, I think they look fine --

-- but then a lot of the consensus understanding of what colors go together and which ones clash strikes me as weird and wrong, too, so I'm probably not the best person to evaluate.
2 So far, the other blooming CB seedlings are:
0835 Brenda Dharling (dead because crappy bloom, small bloom, bloom never fully opened, scale)
0892 Eddie Izzard (soon to be dead because the color is boring, spathes are small, there's lots of thrips damage, and I'm not positive but I think Xanthomonas is present too)
0897 Sylvia Womansune (probably going to be discarded soon; the most recent bloom's spathe caught on the spadix and tore, ripping top of the spathe off, and then what was left of the spathe cracked and tattered -- it looks like someone beat it with a golf club)
1095 Carolina Pineforest (dead due to accidental decapitation, spathe never fully opened)
1249 Celeda (fate to be determined, but I don't like her odds: not only was the first bloom small, and the spathe reflexed badly almost as soon as it opened, but the inflorescence was pretty short-lived too, and the leaves have pretty bad thrips damage)
There's only one surviving CB seedling that hasn't tried to bloom yet: 1233 Aquadisiac. It doesn't look like it's ever going to do so. The leaves have substantial thrips damage, and its root system is poor -- at this moment, it's hanging on to the soil by a single root. When I picked it up to look at it, the whole plant flopped and spun around the root, and usually when that happens, the plant winds up decapitating itself sooner or later. (I've tried replanting them to give them a chance to re-root, and I'm not sure that's ever actually worked.) So the CB group looks like it's mostly or totally a bust, depending on what happens with Zaria.
Posted by mr_subjunctive at 3:00 AM