The human Celeda has me very confused; Wikipedia says she was born Victoria Sharpe, which suggests that she was AFAB,1 and yet Wikipedia also says she's a drag performer, and doesn't include her on the list of faux queens. I can't figure out anything about what kind of drag she did/does,2 or whether she performs in drag at all. Not even 100% certain which pronouns she prefers; Wikipedia says "she/her" but this site uses "he/him." Granted, it's not really any of my business, so I'm happy to let the matter drop, but it's weird not to be able to find any clarification.

The seedling is a little more straightforward. 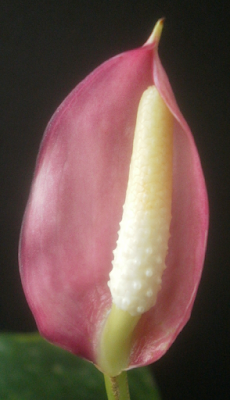 Smallish pink-lavender / light yellow, which is reminiscent of some of the seedlings from the 400s and 500s.4 Like most of the 400s/500s seedlings, the bloom didn't look very good for very long; the spathe flipped backward the day after the above photo was taken, 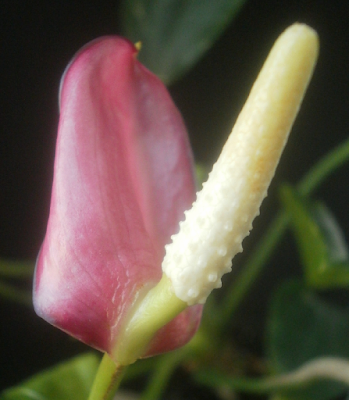 and the inflorescence was dead not long after that. The foliage is even less impressive: 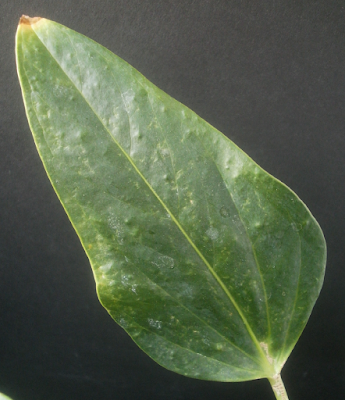 Even without the thrips damage, it wouldn't be great. 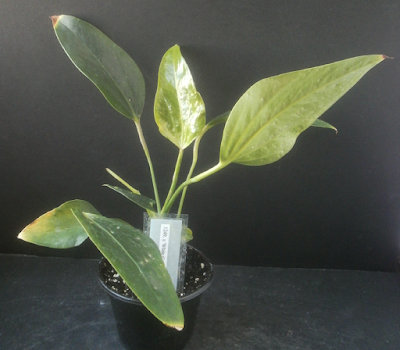 So the only thing the seedling does particularly well is the bloom color. It's not a color combination that comes up very often, and it's pretty: a large, blistered spathe with the same coloration would be gorgeous. The problem is that I'm not sure Celeda's capable of producing seeds or pollen, given how quickly the first bloom faded.

Even if it could breed, I'd rather not see the genes for small spathes that reflex really quickly spread in the population of seedlings. So I'm torn about whether to keep her or discard her. My gut feeling is that probably she's going to be one of those painful cases, when I have a seedling with one or two really good traits that I nevertheless wind up having to discard anyway, but I'll let her try to bloom again before making the decision. Maybe she can save herself.

Celeda is from seedling group CB (seed parent 'White Gemini,' sow date 4 to 12 October 2014). It hasn't been a great group so far:

• 0835 Brenda Dharling (light pink / pink-purple) was thrown out because of scale, officially, but it was going to get thrown out for one reason or another eventually because it was terrible.
• 0886 Zaria Baudit (purple-pink / light yellow) has similar coloration to Celeda but is darker and a bit more robust. Could be a keeper.
• 0892 Eddie Izzard (pink / pink) hasn't impressed me at all; he's still around, but not for much longer.
• 0897 Sylvia Womansune (red / purple-red) is a little boring, but not terrible. Maybe a keeper.
• 1095 Carolina Pineforest (white / white) has already died, from rot or being partly uprooted or both.


1 (assigned female at birth)
2 (it's also unclear whether she's still performing currently)
3 This complicated the attempts to find out about the pronouns and etc., because most of the search results are for sites hosting her music, which don't generally have any information about her as an artist. So there's a lot more stuff to look at than for most drag queens, but most of it isn't relevant to Celeda personally.
4 E.g. 0428 Helen Bach, 0515 Diane Torr, and 0534 Celia Putty.
Posted by mr_subjunctive at 3:00 AM