A small group of seedlings of 0234 Ross Koz -- which produced purple-red spathes with contrasting yellow spadices -- have bloomed in various shades of pinkish-orange and orangish-pink; Kent1 is one of those.2 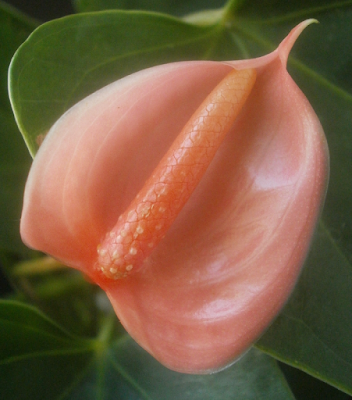 And that's nice, I guess. I mean, it's not unique or breathtaking, but it's pretty. Kent does have the advantage over most of the pink-orange-pink seedlings in that the spathe color doesn't fade as much over time, and he seems surprisingly thrips-resistant, considering that thrips damage shows up incredibly well on light-colored spathes like this. So we could have done a lot worse. The foliage is also just to the positive side of meh -- 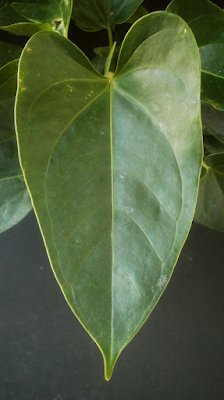 -- and the plant as a whole is very full, with lots of suckering. If nothing else, Kent is one of the few seedlings of 0234 Ross Koz whose leaves actually somewhat resemble Ross's.3 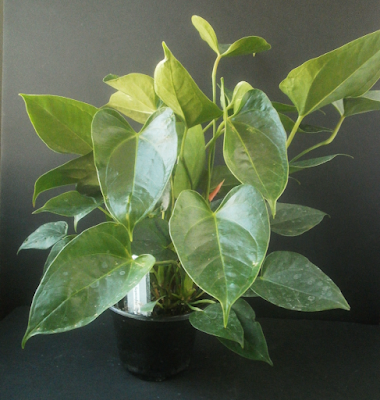 Also, although the spathes do flex backwards as the inflorescence ages, they do so to a much smaller degree than a lot of the other seedlings. 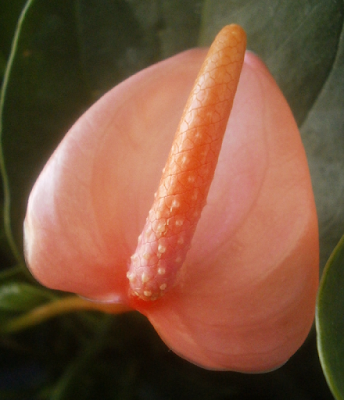 So probably at least a short-term keeper; I don't know about the long-term.

In (literally!) related news, Kent's full- or half-sibling 1038 Adlai Lowe is in the process of producing a second bloom. One hopes. The first bloom was so tiny that I wasn't sure it should even count, and it started at least one other bud but aborted it (which was just as well, since that bud was in a similar location and would probably also have had a difficult time opening its spathe), but the current one seems likely to produce a normal-looking inflorescence. I don't expect the new bloom will be especially interesting -- it's all but certain to be a smallish, run-of-the-mill red/yellow -- but it'd still be nice to have, for the sake of completeness.


1 (The name is a roller-derby name, not a drag name, by the way.)
2 The others: 0805 Triana Hill, 0813 Arya Reddy, and 1721 Leonid the Magnificent.
1344 Boeff Stroganoff has the pink-orange coloring, sort of, though it was so poorly executed that I'm not sure it's actually what the seedling is genetically programmed to do. We'll find out when it produces the second bloom.
3 Ross's leaves are distinguished mainly by being large and flat, without a lot of conspicuous veining.
Posted by mr_subjunctive at 3:00 AM