1203 Peaches West is another dark red seedling, and another seedling with short, squat spathes.1 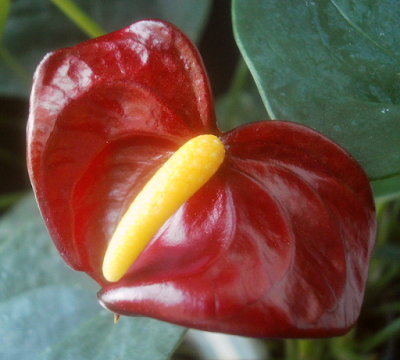 Neither trait photographs particularly well; the camera tends to bring the dark reds to more of a medium, saturated red, and the spathes flip themselves back a little bit as they age, which makes it difficult to get a direct, face-on view of the shape. But you can kind of get a sense of the color by comparing it to another seedling, 1158 Joey Arias, which is a medium purple-red: 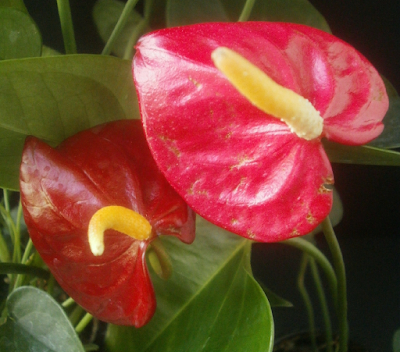 The inflorescences do have one significant thing going for them: they last a really long time. At least a couple months, likely much longer. So that's kind of exciting. And the dark red color is probably a red pigment being expressed at the same time as a light green, and I find that I really like blooms with some green in them -- bronzy oranges and browns, light green, that sort of thing. So I'm probably keeping Peaches around for breeding purposes. She's also doing some interesting stuff with the leaves: the undersides have some red pigment in the larger veins, 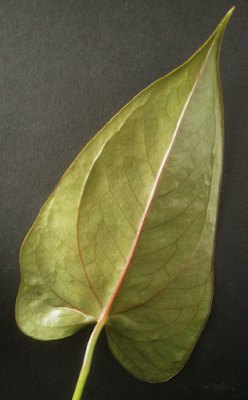 and the thrips damage isn't terrible (though it could be better). 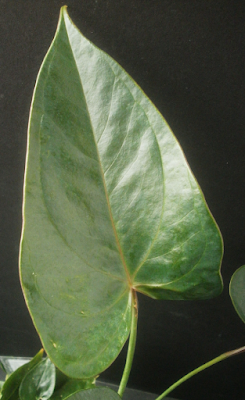 On the bad side, the growth habit tends to be kind of floppy / viney. 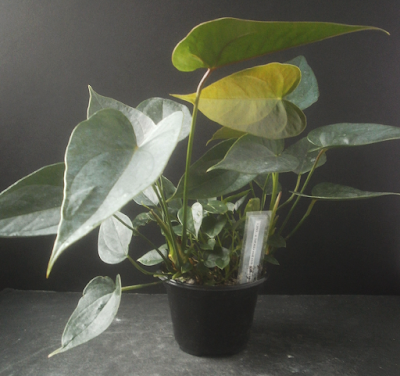 So a mix of good and bad here, but good enough to keep. 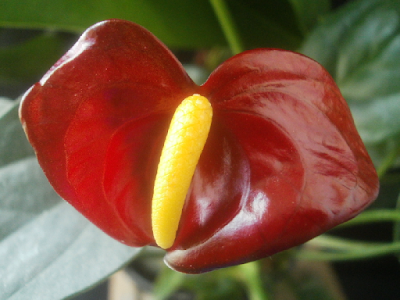 Peaches is one of the DV seedlings, which I've made a point of noting because I get surprised by the DV seedlings every time I think about them; they're all so different from one another that it's hard to believe they're related.2

The real Peaches West is based in Denver, Colorado; mostly what I could find from a quick online search was about her regular job working in a LGBTQQ drop-in-space.3


1 Incidentally, if you wondered at all: 1268 Li'l Miss Hot Mess is now on her fourth or fifth bud, and every bloom so far has been more or less kidney-shaped, so I'm thinking that this means it's genetic and not environmental. Or at least a genetic cause is seeming a lot more likely. Which is kinda neat.
2 The only exceptions are 1203 Peaches West and 1220 Mario Montez, who are both dark red / yellow. All the other DV seedlings has had a distinct coloration so far, and there have been a lot of DV seedlings, so the diversity has been a neat surprise. Probably this points to multiple pollen parents, or maybe even multiple inflorescences -- the seed parent, the NOID red, often had multiple blooms simultaneously, so it wouldn't surprise me if the DV seedling group were all half-siblings of one another.
3 I'm not super familiar with the term "drop-in-space" (and kind of think it should be "drop-in space" anyway), but I gather they're basically community spaces for kids to go after school? Mostly in larger cities, though if I'm understanding their website correctly, Iowa City has one, so it must not be necessary to have a huge city.
Posted by mr_subjunctive at 3:00 AM