Some mixed feelings about the name for this one; using Latin names for cultivars is frowned upon, because of the potential to confuse people about the identity of the plant (if you see a "'Cuphea' Angelonia" in a catalog, for example, it's very easy to think it's a Cuphea rather than an Angelonia), and although these names aren't official cultivar names, just something to call them so that I can remember which seedling is which, and even though it should be totally obvious in any context that this isn't a sunflower, I still hesitate to use the name. It just feels . . . wrong.

But in any case. Gia Sunflowers is an actual drag queen from Atlanta, GA, and there are plenty of videos of her on YouTube if you're interested in seeing them; I'm not going to link or embed any because I didn't like the sound quality on any of them, but they're probably worth it with the sound off. The outfits are interesting.

As is the seedling. Gia's another one from the DV seedling group, which I last mentioned in the post for 1217 Charles Ludlam ("the least interesting of the DV seedlings;" pink/pink with unusually vivid new leaves) but there have been a few DV seedlings since then: 1209 Raven Samore Holiday (weird proportions, boring color), 1224 Perry Watkins (possible obake, slightly interesting colors), and of course 1299 Sinthia D Meanor (odd spathe shape, sort of tan and green, weirdest seedling ever). You wouldn't look at this group and think Gia was related to them, but here we are anyway. 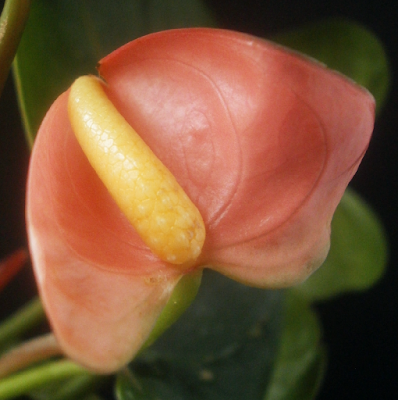 So far, Gia hasn't made a great showing; the spathe color is interesting, and I like the contrasting spadix. There's even a hint that she might be another obake-type, though I had a terrible time trying to get the green to show up in photos at all: 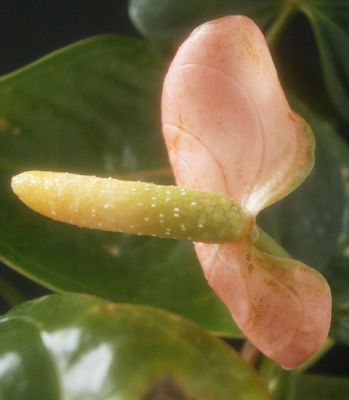 You'd see it if you were here.

I mean, you wouldn't see it at the moment, because the bloom was disappointingly short-lived. But had you been in the right place at the right time, looking with the right optical equipment, you would totally have seen a tiny sliver of green. Mostly on the back of the spathe.

Gia bloomed at more or less the same time as her sibling, 1301 Symphony Alexander-Love. At the time I was more impressed with Gia, but it's Symphony who got promoted when I up-potted recently, mostly because Gia's thrips resistance is terrible.1 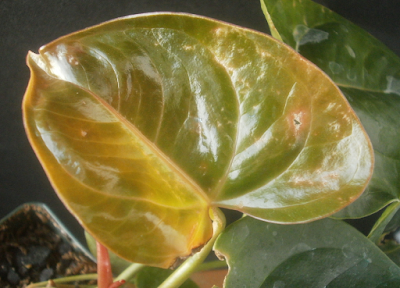 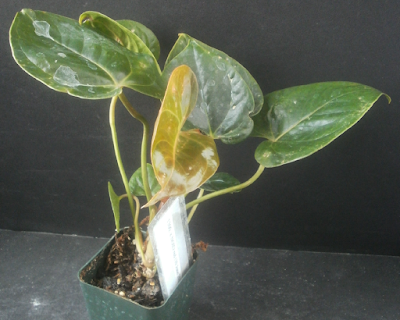 I intend to postpone the decision on Gia; it'd be nice to see a bigger bloom, or some thrips resistance, or even just a longer-lasting spathe. Basically any improvement at all, and I'd be happy to try keeping her around a while longer. We'll see if she can do it.


1 In addition to the short-lived blooms. Symphony's the next seedling in line for a post, so you'll soon see just how much better she does than her sister at . . . basically everything. Even the color's grown on me, though I thought it was kind of boring at first.
Posted by mr_subjunctive at 3:00 AM