Pretty middle-of-the-road batch today, though there's one I like, and another that's at least mildly interesting.

Foxxie is an okay pink / pink. Not a lot to say about the inflorescences. 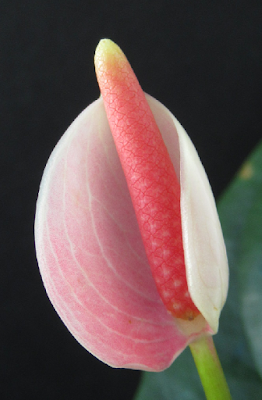 I'm a bit more interested in Foxxie's foliage, actually: the leaves are a bit on the long and narrow side, 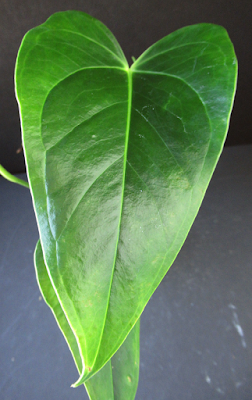 and are pretty large for the overall size of the plant, which could be a good thing. Who knows. This is more or less in keeping with her seed parent, 0290 RuPaul Charles, though Ru had red spathes, not pink.

Also Foxxie doesn't have much thrips damage, which is very unlike her seed parent, and probably the best thing about her. 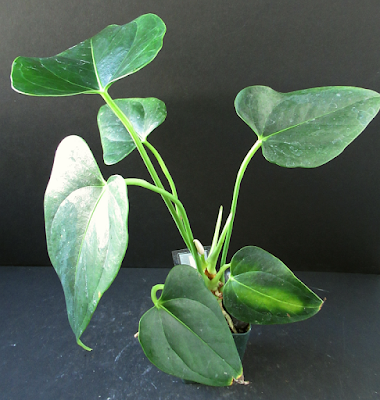 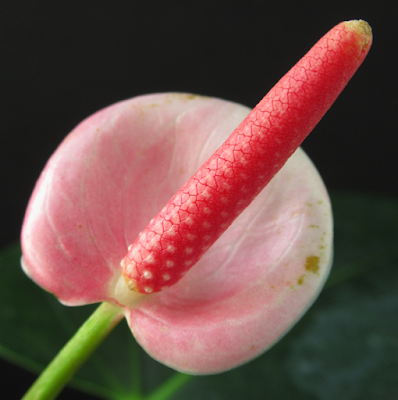 I find I don't have strong feelings either way about keeping or discarding Foxxie, so I guess I'll keep her for now, and make the decision later.

I didn't get foliage pictures again, so we'll judge this one solely on the basis of the bloom. 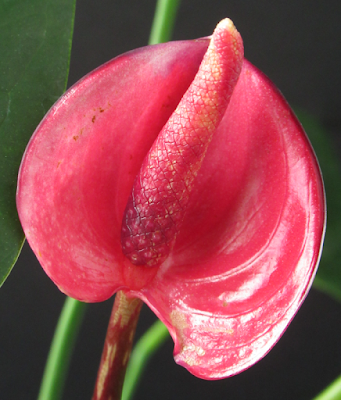 Ennh. Looks a lot like 'Red Hot,' who I'm pretty sure is at least one, maybe two, of Honey Bea's grandparents.1 I don't really have strong feelings about this one either.

Horrorchata, on the other hand, I like, mostly for the bloom color. 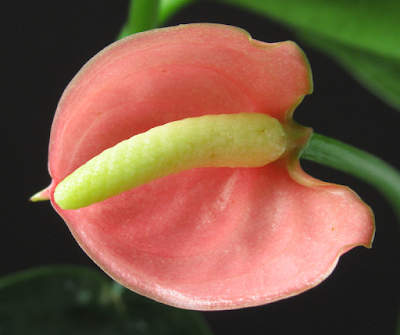 The spathes so far have been pretty small, but at least they're plural, and the thrips seem to be keeping their distance, for whatever unfathomable thripsian reasons. So probably a keeper. 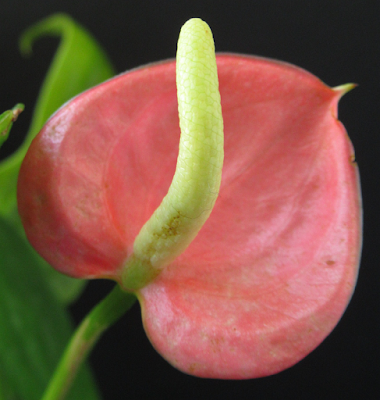 The leaves are more matte than glossy, which is not my preference but it's okay. Not a lot of thrips damage on the foliage either, which is good.

As I'm pretty sure I've said already, somewhere, Horrorchata is another seedling from 0330 Faye Quinette. Faye's seedlings haven't been uniformly awesome or anything, but they do tend to be a little more interesting than average. 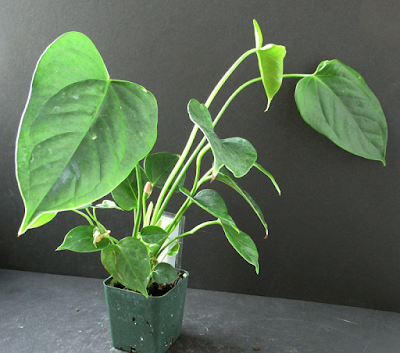 Another one where I missed getting the foliage photos. The interesting thing about Jaymee is that the spadix color seems to be really variable. The spadix from the first bloom was lighter than the spathe, 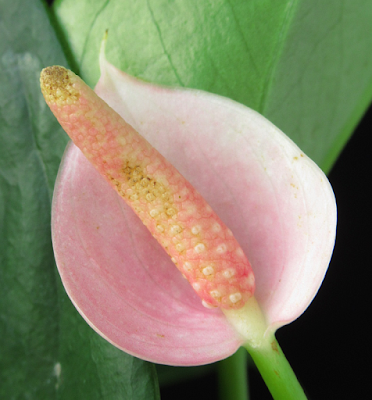 and the spadix from the second bloom was darker. 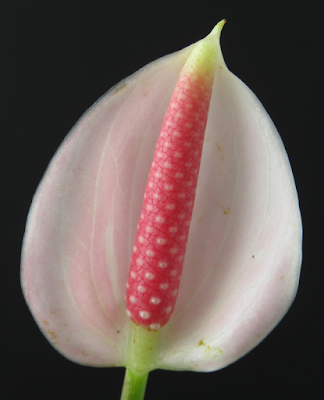 It may be that the first photo was taken of a spathe that had just opened, and for the second photo, I didn't notice the bloom right away, so it had time to change color. I don't know. My notes from October/November/December last year aren't great; there was a lot going on.

Jaymee's seed parent was 0594 Charity Case, a pretty ordinary pink/pink. One of her siblings has also bloomed, and is also a bit more interesting than the average pink/pink, so we have that to look forward to. I guess.

Finally, Regina, whose seed parent was the pink/pink 0273 Wes Coast. Wes's kids have had a few things in common: they have tended to produce unusually large leaves (even though Wes's were not particularly large themselves), scale loves them so much that I had to throw almost all of them out, and the ones that survive long enough to bloom don't produce pink/pink blooms. The pink-orange 0728 Sister Dimension had pretty nice blooms but thrips damage on the foliage, and 0788 Owen McCord has really fantastic, vivid orange/yellow or orange/orange blooms, with brown new leaves. 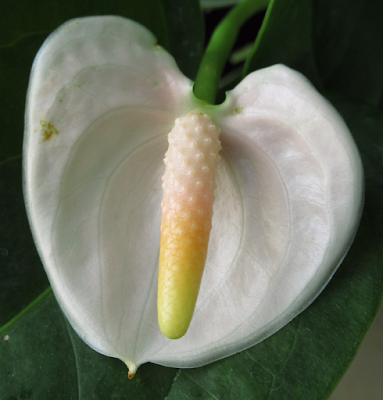 Well, not white. Technically, it's a very, very, very pale pink. But it photographs so close to white that it may as well be white. The problem with white spathes is that even the tiniest bit of thrips damage stands out. 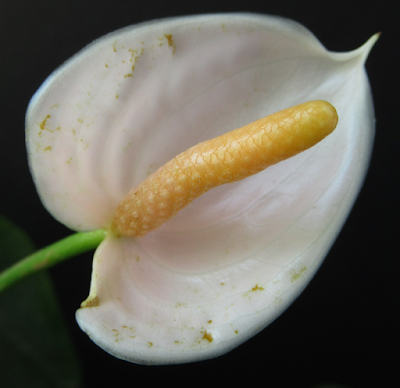 Somewhat mixed feelings about the foliage. On the one hand, there's a lot of it, 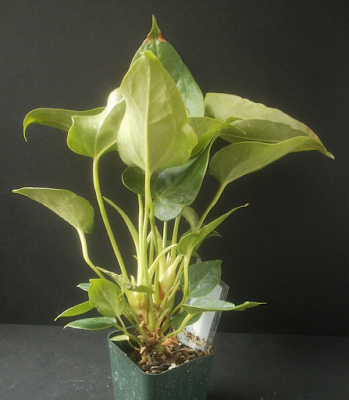 but it's not especially large or shiny or interestingly-colored or anything. It's just a leaf. 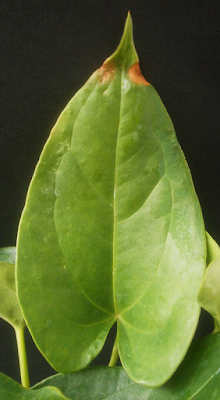 In the above photo, ignore the brown patches near the leaf tip. The plants have grown to the point where they're touching the fluorescent bulbs above them, and I don't have anywhere to move them to, and I can't adjust the shelf heights without putting other plants even closer to the bulbs, so . . . some of the leaves get scorched. It's not the plant's fault. 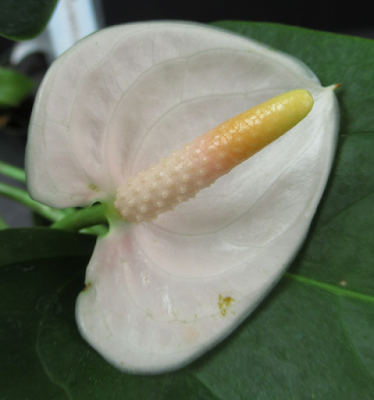 Probably keeping Regina: it's nice to have the variety of colors, even if I'm not crazy about white-blooming seedlings.


Yay! We're making progress through the seedlings! Might be caught up by early November, not mid-November like I initially thought.


1 Honey Bea's seed parent is 0108 Deena Sequins, which I think is probably NOID purple (known) x 'Red Hot' (guess). The pollen parent could be a lot of different plants, and it's unlikely that I'm ever going to find out which.