Jinkx is just a nice, solid seedling. The spathes are initially orange, and gradually become pinker with age, which is perhaps not . . . ideal, but they're large, and long-lasting, and she's producing a lot of them,1 so I can live with a little bit of color-fading. 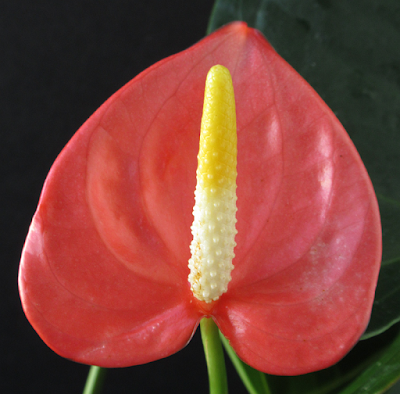 The foliage isn't amazing; I'd be happier if there weren't so many thrips scars. Though in the absence of the thrips, I suppose it would be attractive enough. 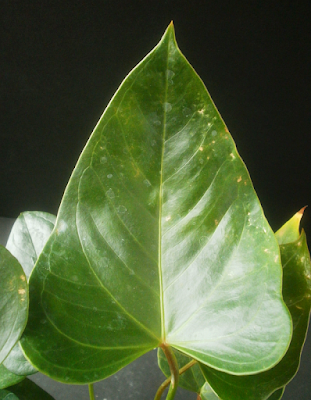 And the plant as a whole is very robust. I want to move her up to a bigger pot, as I mentioned earlier, but there's no room at the moment, so she'll have to be patient for a while longer. 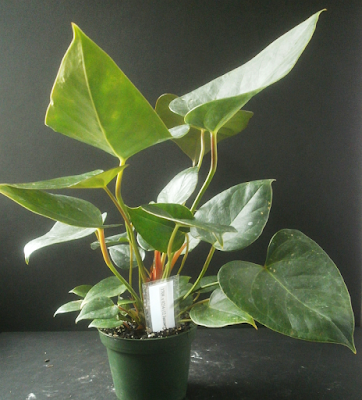 Also, I haven't been commenting on the drag queen angle of things lately, because it's time-consuming enough to keep up with the plant side of the posts, but Jinkx is worth looking up, if you care about drag queens but have somehow managed not to hear of her already.2


A'Kasha's blooms are a little weird; the spadix is initially light yellow, but then blushes a kind of patchy red, eventually settling down to a red-pink at the tip and a green-brown at the base. Which I thought was unusual until I began writing the post, and then I started second-guessing myself: I can't remember whether this has happened before or not. In any case, the spathe is a nice dark red, which doesn't photograph as particularly dark. 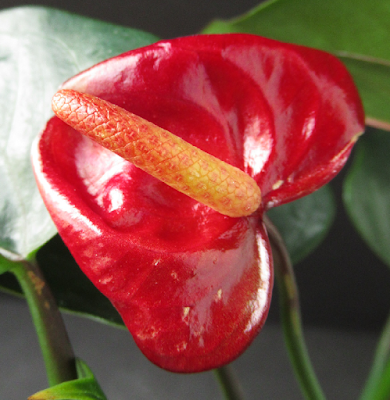 What's actually interesting about A'Kasha is her first bud, which was remarkably wicked-looking: 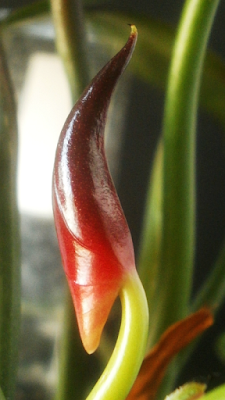 I haven't been watching closely enough to see whether later buds have looked the same.

As is common with the dark red blooms, the leaves are such a dark green that cameras don't seem to know how to depict them, 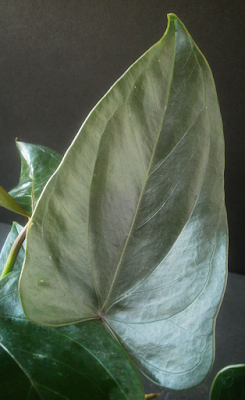 and the texture is interesting too, somehow kind of glossy and matte at the same time. The spathe has thrips damage, but I can't find any at all on the leaves, and it's a pretty full-looking plant as well. 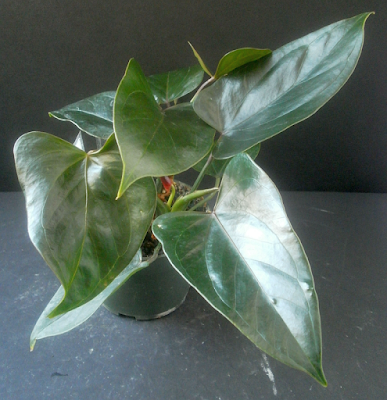 I'm not sure that A'Kasha is interesting enough to be guaranteed a place forever, but she's certainly cool enough to hang on to for quite a while. 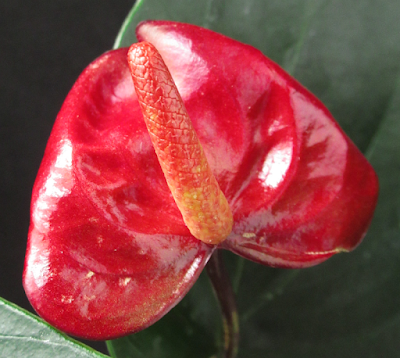 
1 Not visible in the photos because, as with basically all of the recent Anthurium posts, the photos are very old. This is what happens when you're trying to catch up with seedlings that bloomed eleven months ago (Jinkx's first bloom opened on 4 October 2017): the seedlings keep growing while you're getting your shit together.
2 Among other things, she won season 5 of RuPaul's Drag Race, but there's more. Wikipedia is a good place to start.
Posted by mr_subjunctive at 3:00 AM

A'kasha's bud does look wicked in both senses, fantabulosa and a little evil. Like a real-life version of an Aubrey Beardsley plant.