Well, there are a couple sort of interesting seedlings here, I guess. Nothing to get too excited about.

Charlie's first bloom appears to have sort of forgotten how to build a spadix in the middle of the process: 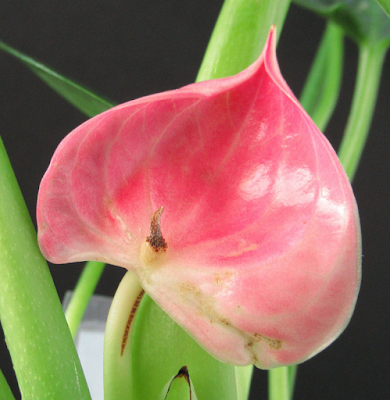 I think what's actually going on there is some kind of bacterial or fungal thing -- I feel like I read something about spadix-eating pathogens at some point long ago -- but I haven't looked into it very hard. It's happened with other seedlings, and they seem to snap out of it eventually, if the plant is otherwise healthy. And, indeed, Charlie's second bloom was much more normal-looking: 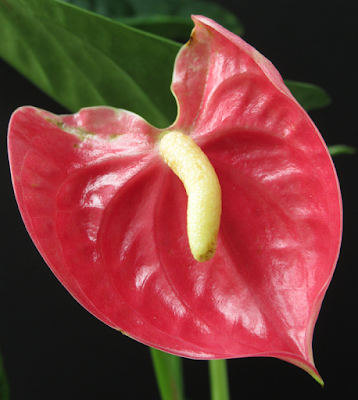 Some thrips damage on the spathes both times, of course, which is obviously not ideal. The leaves fare better: 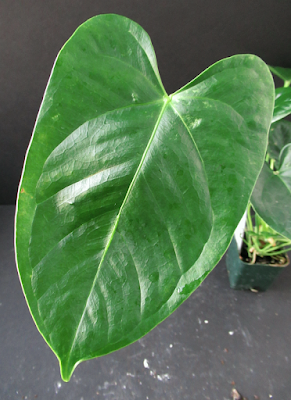 And the plant overall seems fine. 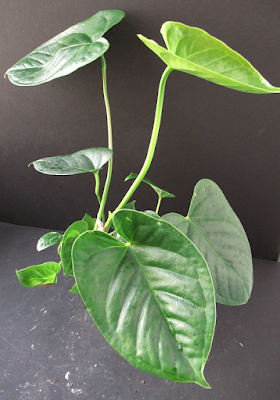 Probably keeping Charlie around for a while to see what happens. If nothing else, he's another seedling from the NOID pink-green plant, and so might have some interesting recessive genes.

Rolinda's actual inflorescences are difficult to get excited about: 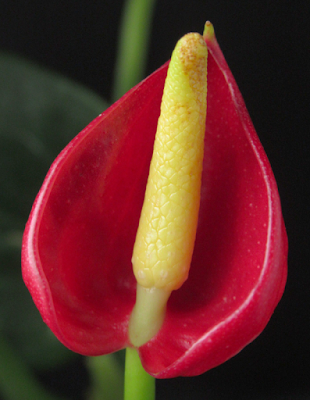 but the new foliage is nice. The color in these photos is a little more extreme than reality, because I was still getting used to the camera when I took them, but the progression from brown 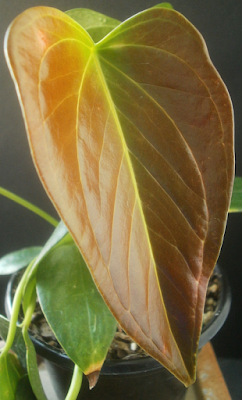 to brown and green 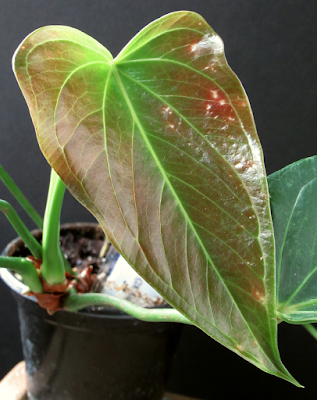 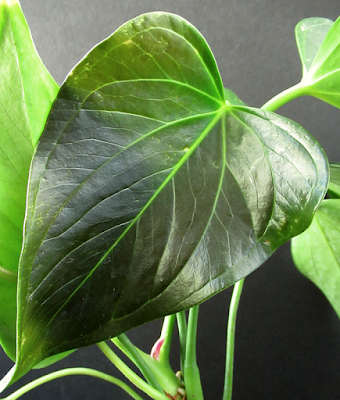 is real enough. (This would be in keeping with her seed parent, 0005 Chad Michaels: Chad's new leaves were never quite this dark, but there was an undertone of red or brown, enough that they didn't come across as plain green in person.) There's some thrips damage, but the plant overall is certainly worth holding on to. 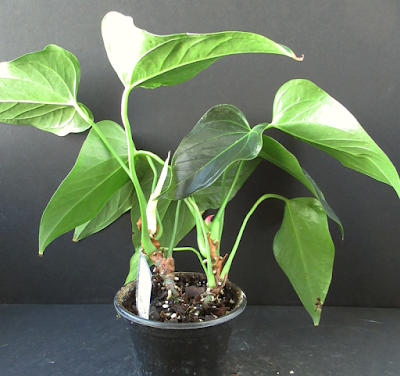 Or it would be worth holding on to, except that after I finished the first version of this post, I noticed that Rolinda appears to be already dead. She was fine the week before (except for being sort of generally stunted), but it looks like either she got too dry and wilted, and then couldn't recover, or she got too wet and rotted, and doesn't have the energy to rebuild. So . . . never mind about Rolinda, I guess. 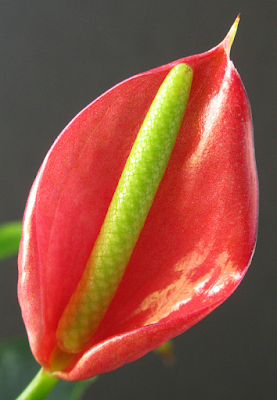 Though I'm less enthusiastic about the way they age. That's a lot of thrips damage. (The two photos are of different blooms: above is a recent bloom from April 2018, and below is the first bloom, from October 2017. But the newer bloom did basically the same thing as the older one.) 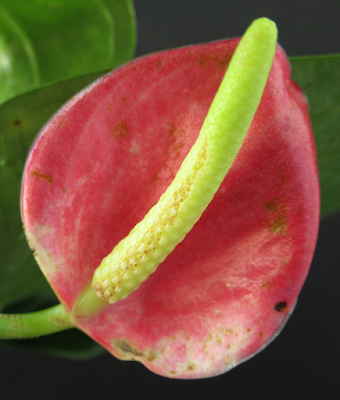 The foliage is more interesting. It's not that there's no thrips damage, because there is: 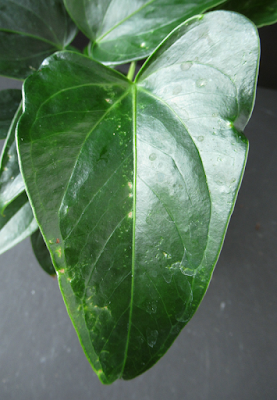 But the overall texture of the leaves is a nice, glossy dark green, and the thrips damage isn't nearly as bad as the single-leaf photo would have you believe. 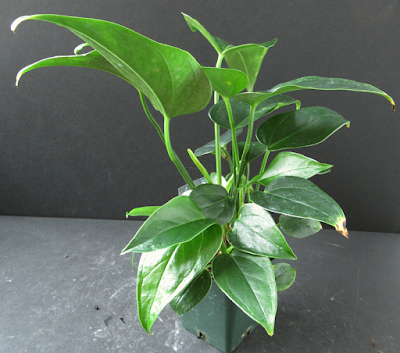 So a tentative keeper, I think. I'm at least delaying the decision until later.

I neglected to get foliage photos for Jill, and there's only been one bloom so far, so our information could be a bit more complete. But the first bloom was large and nice, especially for a pink/pink, 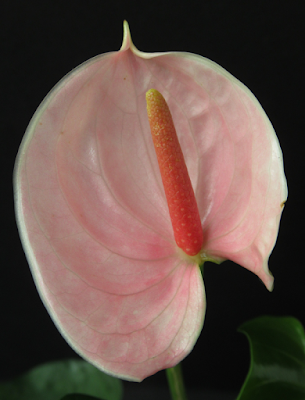 and it aged okay. I mean, that's a lot of thrips damage showing up. But I've seen worse. 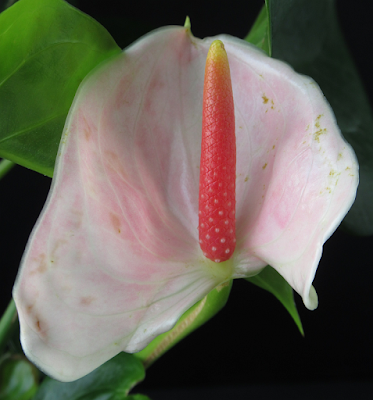 And Jill has the advantage of being another seedling from the NOID pink-green, so I was always inclined to keep her, unless she was really spectacularly awful.

And finally, I was really surprised that Tabboo!1 bloomed at all, given how small and weak the plant seemed: 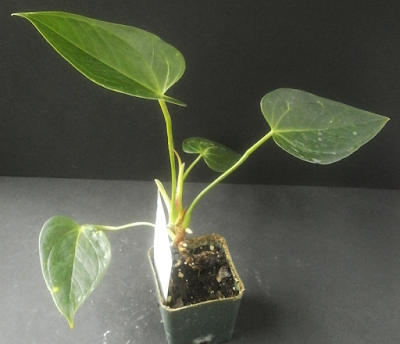 As far as it goes, actually, the plant still seems like it's ready to collapse at any moment, but it's bloomed at least once since this, I think twice. So it must be doing better than it looks.

The bloom is fine, but nothing special: I already have this color combination several thousand times, and the spathe has been small every time. 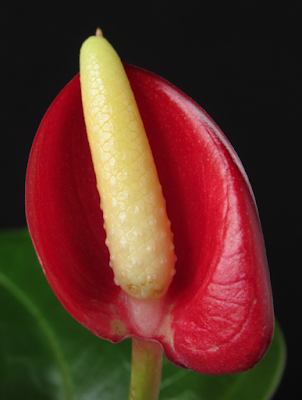 Leaves are likewise fine but nothing special. Or, well, there doesn't seem to be thrips damage, which is special. It's just probably not special enough. 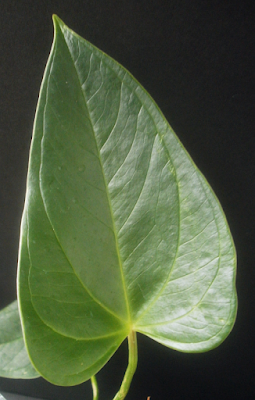 Tabboo!'s seed parent was 0232 Rhoda Badcek, who was a pretty average pink/pink. The only other seedling from Rhoda to bloom, thus far, was 1452 Chastity Vain, who is similar in bloom color and overall demeanor, though Chastity's bloom quality has varied a lot more than Tabboo!'s.


1 [spelling sic; the actual performance name for Stephen Tashjian. The spelling for the social prohibition is usually "taboo." Though I have also seen "tabu." The word originally comes from Tonga, but other Polynesian cultures have similar words for the same concept, like the Maori tapu or Hawaiian kapu. Interestingly, The Free Dictionary notes that Hawaiian contains a lot of words in which the consonant T has become K. I wonder if there's a story there.]
Posted by mr_subjunctive at 3:00 AM