File under "better late than never:"

It's been some time since PATSP's "Rumble Among the Jungle," in which PATSP readers voted in a single-elimination tournament to determine the Best Houseplant of All Time. The winner, Schlumbergera cvv., was declared a year and a half ago, in November 2011. (The results of all matches are collected here, if anyone cares.)

The husband suggested photoshopping a belt, tiara, or trophy -- or all three! -- into the picture, in honor of the win, but I'm afraid I'm not skilled enough to do that, so you'll have to imagine.

Thanks to a reader,1 we finally have that picture, and I've got to say it completely lives up to what I'd imagined (though is it just me, or does the belt make it look fat?): 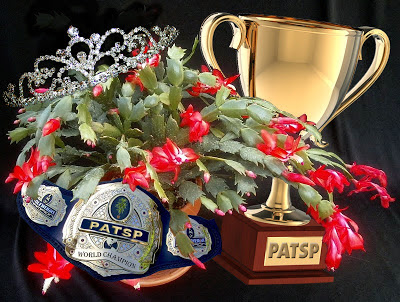 So congratulations again to the Schlumbergeras.

I've occasionally thought about doing a second RATJ, but 1) Polldaddy seemed to forget that I had an account there shortly after the RATJ ended, which is irritating, and I haven't bothered to create a new account; 2) my memory of the first one is that it took a lot more time to run than you'd think; and 3) I'm not wholly convinced that Schlumbergera wouldn't just win again.2 So maybe it'll happen sometime. Everybody did seem to have a good time, and we've got a different group of voters now than we did back then, so it could still be surprising.

In any case, thanks for the Photoshop work: if nothing else, I think it's convinced me that tiara-and-a-belt is a good look, and now I want to see that combination on some prizefighters and beauty queens.


1 (I didn't know if you'd want to be credited for it by name or not, so I've erred on the side of privacy. But feel free to take credit in a comment, if you want to.)
2 (Though that could maybe be dealt with by making a rule that plants who'd won previously wouldn't be eligible to compete again.)
Posted by mr_subjunctive at 3:00 AM

Indeed looking at the picture, it is quite obvious why this beautiful plant won the coveted award.