Aaaaand the orchid festival continues. If they'd quit pinching back all the annuals at work, I might be able to cross over into some non-orchids already, but apparently it's more important that the annuals be sellable than that I have good material for the blog. The boss has odd priorities sometimes.

This particular plant has sold already, some time ago, and I regret that I never got a particularly good picture of it while it was around, but then, if I had gotten a good picture, you wouldn't have believed it anyway: the color was screamingly, blindingly, painfully yellow. (This isn't actually that far off on the color, though this picture is maybe a little more orange than reality. Also reality was in better focus.) The individual flowers weren't anything real exciting, but the group of them all together passed exciting and wound up somewhere in the neighborhood of alarming. 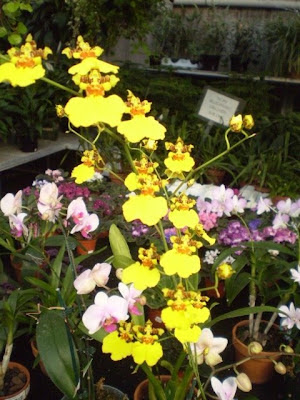 Orchids have been selling remarkably well for us this year, which I know because everybody who's been there previously has, well, remarked on it. The consensus seems to be that they're doing better than previously, and looking better too, because last summer, they had all the orchids outside, either in a shady, protected spot or along the south side of the building, and didn't bring them in until temperatures were forecast to be in the mid-to-low 40s (F; 4-8C). Obviously we've also brought in new stuff, too, and I think Saint Dawn Gold was one of the new ones, but the closely-related Onc. Space Race Coco was a holdover from winter or spring, and it did well enough to bloom and sell and get remarked on. Though Space Race Coco didn't do much for me, really.

(You can see pictures of both Saint Dawn Gold and Space Race Coco here. They're the two at the bottom of the page.)

I also tried another stereogram picture, which didn't turn out all that well either, but which might be amusing for those of you who can make stereograms work. The idea is basically like for one of those "Magic Eye" pictures: cross your eyes just enough for the pictures to overlap one another and then wait for your brain to synthesize the images into a single 3-D one. 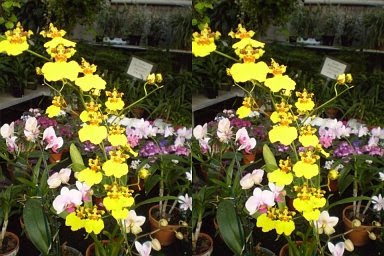 Posted by mr_subjunctive at 5:10 AM

Mr. S, you're going to convert me to an orchid-devotee soon... never tried one, but indeed some of them are splendid!

Thanks for the link to my blog as well, I just realized you did it. I need to work on it, but everything else than gardening is keeping me *very* busy...