Got a new batch of tropicals in this week, and I've already bought several. Since I'm excited about them at the moment, and since they're pretty, because they're fresh off the truck, I thought it would be appropriate to post some pictures. A couple of them I don't know the variety name for, so anybody with any knowledge, please sing out in the comments: 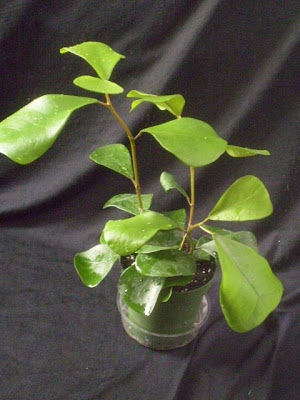 Ficus triangularis
We had one of these already, but it was grown as a bonsai, and the leaves were tiny. None of us actually knew that F. triangularis could grow leaves this big. I'm not necessarily a huge fan, but it was cheap and I was curious about how we'd get along, since I'm mostly on good terms with the rest of the family. 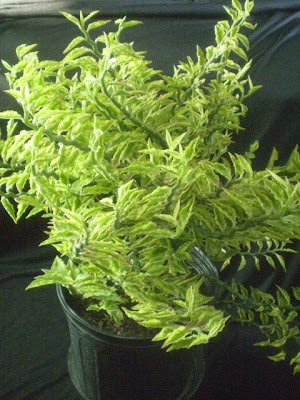 Pedilanthus tithymaloides
No, I didn't need another Pedilanthus, but look at it. It's huge. At least this way, I know I'll have cuttings available, if and when I need them. And I swear, nobody has these up here. In the kingdom of the Pedilanthusless, the one-Pedilanthused man is king.

I don't know. I just wanted it, okay? 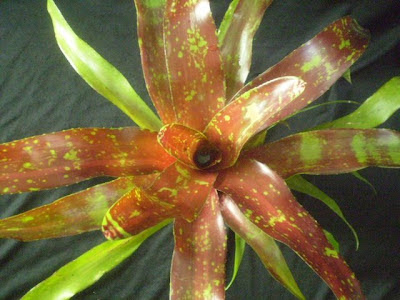 Neoregelia NOID 'Gazpacho'
I don't know the variety, but I love the pattern and color, and it's also got an offset. Only thing I'm not giddy about is that the leaves have backward-pointing spines on them, which makes it tough to clean up. Well, and also it was expensive for a 4-inch pot. But even so. Not every plant knows that maroon and chartreuse go together so well. 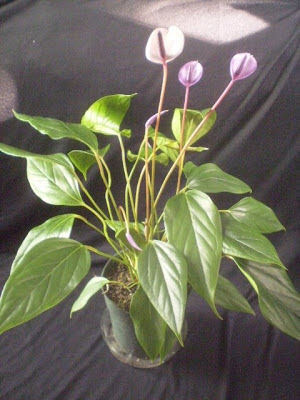 Anthurium andraeanum NOID
.
This was one of the first things I saw when we started opening boxes, and it was also the first thing I set aside for myself. No way am I going to pass up a purple Anthurium. I don't have an ID for this one either; I couldn't find anything on-line in a quick search that had this color. WCW said that there'd been a variety called Plum something, or something Plum, earlier, but that those were lighter than the two we got in this time: this variety had a better color, in her opinion. 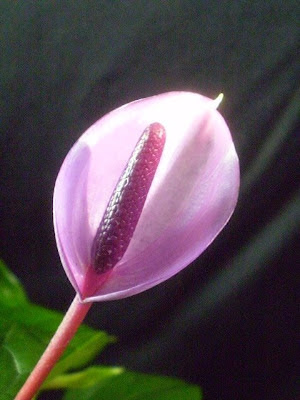 Closer picture of the flower.
God, I love Anthuriums.

And, you know, I guess I love everything else, too, pretty much. You'll have to stay tuned for the pictures of the bromeliads I didn't buy. Or, you know, didn't buy yet, I guess. Also there's an orchid which all the co-workers agreed was the most awesome orchid we've ever gotten: I have a picture to share later.

That close-up photo of the Anthurium is simply stunning.

Thank you for the 'Pick' on Blotanical. I'd only just finished 'putting it up'!

(Which means you may have read today's ESTHER IN THE GARDEN before I'd even got the layout right.)

(I always find that difficult. I put them where I want them in 'draft' - then, when it comes up as 'published' - they've jumped to somewhere else - or split across words.)

Anyway - thanks! - And congratulations on that Anthurium photo!

You're anthurium looks just like the one I have, called "Anouk." Indeed a beauty, and it blooms constantly!

I think it is most likely a form of 'Purple Plum' but a lovely shade - you were lucky to find it.

That really is a stunning Anthurium. And you're right; it is like Christmas. I think I'd be bursting with excitement opening up those boxes. In addition, it's probably extremely difficult to resist taking home tons of plants that there probably isn't any room for!

Just wondering if you still have this Anthurium.

Also, if you have a "to do" list of things that need changed on the site, tithymaloides is no longer classified as Pedilanthus.

Kind of ruins the humor here....doesn't really work with "Euphorbia" so I've just been calling it tithymaloides. It's funner to say anyway.

Yes and no, on the Anthurium -- this is the NOID purple that kind of fell apart on me a while back (a year ago? two?). I still have one small plant from water-rooted cuttings, and the original has sprouted a few new leaves after being cut back to the soil, but I don't have high hopes for either of them to bloom in the near future.

I'm aware of the name change, but with some plants I deliberately ignore name changes. Depending on the plant, this may be because I'm not sure I believe the taxonomists (Dracaena marginata became Dracaena reflexa var. something I can't remember), because I like the old name a lot better (Synadenium grantii vs. whatever Euphorbia they changed it to) because I figure anybody who's searching the web for that particular plant is going to be using the obsolete name anyway (Pedilanthus tithymaloides), or because I already learned one new name and then they changed it again and I feel like it's unreasonable of the taxonomists to expect me to learn more than one new name for a given species per decade (Coleus blumei became Solenostemon scutellarioides became Plectranthus something; I went along with Solenostemon but balk at Plectranthus).

Some overlap between reasons, too, of course.