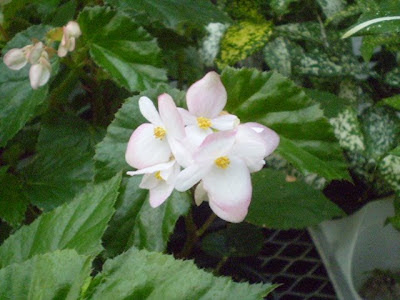 Begonia NOID.
We have more interesting Begonias than this, but this is the one I got a picture of. People don't really seem to care for it, and I can't say as I blame them. The ones at work are only now, two months after people would maybe have bought them, starting to look presentable. Not so much fashionably late to the party as showing up to the party at the wrong location, the day after it was held. We will have to propagate earlier next year. 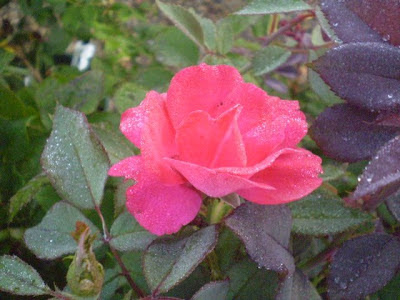 Rosa x 'Radrazz'
I haven't taken any pictures of the roses at work before this, mostly because the roses are the domain of the nursery lot, not the greenhouse, and so I don't normally have much of a valid, work-related excuse for being among them. (Same thing for the trees and shrubs, actually: we do have them, I'm just never around them.) Also I just kind of don't get what the big deal is (please don't hate me, Niels): as far as I can tell, they're just one more flowering plant, one that gets sick a lot. I used to like the cut flowers, too, until I read Flower Confidential (I'm still intending to do that review someday.); now I'm a little uneasy about them. I'm willing to be educated on why roses are the best plants ever, if anybody wants to: it's clear that there must be a lot of people who think this. 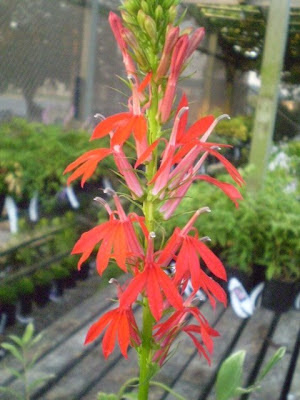 Lobelia cardinalis.
The color is even more eye-searingly red in person. It's hard for me to see this, which is surely among the reddest red I've ever experienced, as being related to L. erinus, which is just about the bluest blue. But apparently they are related, and there are other plants in the genus that they resemble even less than they resemble one another. Lobelia is just a varied genus, I guess. 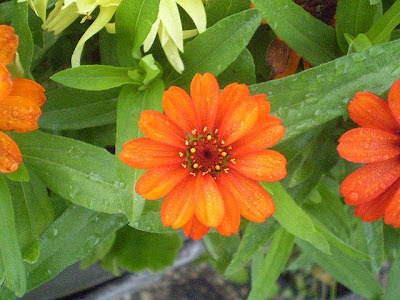 Zinnia 'Profusion Fire'
All the Zinnias were sold a long time ago; this is from a planter that the nursery lot put together to decorate the lot with. (It's probably technically for sale: pretty much everything is for sale. The boss would sell the floor if someone made a good enough offer. There is, however, no marked price on the planter, so if someone were to ask we'd have to make up a number on the spot.) 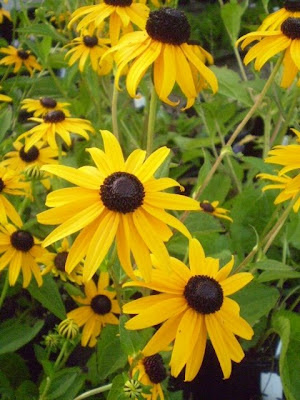 Rudbeckia fulgida 'Goldsturm'
My way of renouncing the comment I made earlier about not liking black-eyed susans. They're okay. I'm a little confused about what the difference is between 'Goldsturm' and the plants I see growing along the sides of the road here. There's nothing that jumps out at me to say this plant is clearly better than those plants, yet it's a cultivar and those are not. Why?

Lovely blooms for the first day of August. I don't know what to tell you about "Goldstrum", other than it has a name and the ones on the side of the road don't? :)

I see these everywhere here too, growing rampant and wild......you must have read my mind because I was looking for an id on the black eyed susan's. Begonia's are cool in that they are quite diverse, I am not a fan, but they have nice flowers.