I can't imagine this one looking all that great en masse, from a distance, but it's pretty cool close-up. And maybe I'm just having a failure of imagination anyway. It's not that I don't like dark-colored plants and flowers. 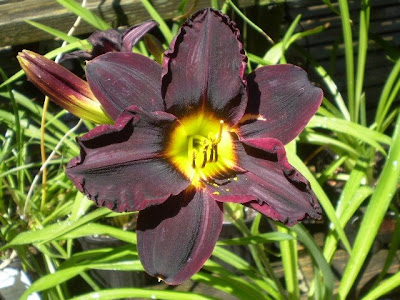 I've been noticing different daylily planting approaches lately. Some people go for a very organized look, all the same variety, in a large, uniform bed, or in a long straight line. Other people buy eight different kinds and plant them all together in a jumble, without any attempt at organization or symmetry or even color-coordination. I'm not saying either one is wrong, but there are certain accidental color combinations with the more haphazard approach that kind of set my teeth on edge sometimes. And I'm bothered when I see more than three colors planted together, for reasons I can't explain, unless there's a clear and obvious attempt at symmetry or some other kind of pattern to it.

Sometimes I find the solid-block (or -line) approach annoying too, because it can be monotonous if taken to the extreme. Which someone inevitably will.

But whatever. The organization of one's daylily bed is not, I think, a moral issue. I'm just saying sometimes I wish I could dig up other people's beds and arrange things more to my liking. And I would be surprised if I were the only person who had ever felt that way.

I'm sure you're not the only one to feel that way. When I first started to garden I wanted everything neat and tidy and in rows, with colors matching just right. Then I discovered English Cottage Gardening which is more of a messy look. It suits daylilies just fine. I now have over 130 cultivars, and it's impossible to keep the colors from clashing. I sometimes will move one that's extremely bad but otherwise I plant where there's a hole and let it happen. From far away the colors look like a Renoir or Monet painting. I love it.
AS far as the dars, they're my favorites. They make my heart go pitter pat. Your Jungle Beauty is gorgeous.

jane, glad you said that. I have an assortment of daylilies from a spring swap that I have yet to get in the ground, and I'm not sure how to arrange them. Thanks for the suggestion.

I like cottage gardening too. The messy look is a lot more forgiving!

You're not the only one that feels that way. I like symetry or a pleasing color combination. A big jumble of colors can be somewhat messy looking in the garden. But to each his or her own, I guess. That 'Jungle Beauty' is a knockout but I guess it would be hard to notice from a distance.

Oh . . . the opposite from you. I get really irritated by regular planting and love haphazard colour schemes.

I'm more likely to wince if I feel adjacent textures are 'wrong'. (!)

Incidentally, and this is probably connected, the marigolds Esther planted outside her house are now flowering. (I think you had a discussion with her about calendula / tagites in the spring.)

Some wild mustard has self-seeded, there and bright orange Californian Poppies and red climbing nasturtiums mixed in (they aren't climbing at all, they're sort of clambering round and in and out at will) plus some pale yellow hollyhocks which are spilling forward because the ground is too hard and dry to get stakes in (I've tried!).

What with the nettles and sage and remnants of one of her ill-fated artichokes . . .

Mr. S., you are WELCOME to come to my house anytime at all and organize my daylilies.

Then you have folks like me who simply don't care for daylilies at all....
LOL

As far as organized or a 'mess' ... I know what you mean. Sometimes the 'mess' route can actually be very pleasing though the same also holds true for the very formal

Too each their own

I admire a formal symetrical garden IF it is well-cared for enough that nothing spoils that symetry.

I find plain old daylilies pretty boring, but I love some of the unusual colors. Beds of Stella d'oro in shopping center parking lots are so trite that they make me want to vomit, but I still like them better than ugly neglected ancient shrubs.

Another great flower for a ninja garden!

Heh...I just glanced at the post title and I thought it said "jungle boogie"...hahahaha...awesome. You aren't the only person who'd like to re-arrange daylily beds, I especially cringe at the en-masse plantings of the plain ol' orange "ditch daylily". I mean, there ARE other colors!

Stella d oro is the kind of acid yellow that sets my teeth on edge , unless the flower bed has similar yellows , orange , gold , and brown or warm red. Pale lemon yellows will match with almost anything . Here it MA on dry sandy soil no daylily stays in bloom that long but small clumps of the same color can have a great effect mixed in with lots of other plants A whole bed of just daylilies would need a lot of water. Also many daylilies are no where as hardy as they claim so I get mine from other local gardeners - I don't buy them . Thanks george plant queen from MA