Ahoy! Talk Like a Pirate Day 2008 be upon us already. So swab the decks, kick the bilge rats overboard, and let's all drink grog 'til we can't drink grog no more! 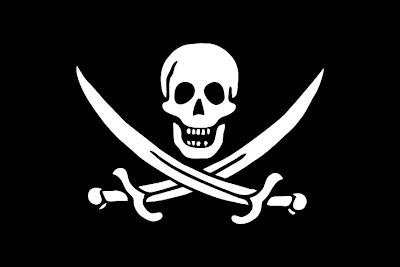 Or something. I'm just trying to hide the fact that I didn't buy you guys any presents.

This is my last posting day before a briefish and badly-needed four-day hiatus; I know it doesn't seem like I'm actually exerting myself that much, but I've actually posted more than 10000 words so far in September alone, not counting this post, anything I've written on drafts of posts that haven't gone up yet, or the time it takes to take and edit photos. Plus, I worked yesterday and found mealybugs on two more work plants (or at least one: the other had obvious damage from something, and it looked like mealybugs were the likely culprit, but I couldn't actually see any. Sprayed it anyway.), and one of my plants at home. So that's been a little discouraging.

The next post will be on the 24th of September, and I'll probably be working on more stuff during the hiatus, which will then be posted once I come back. I.e., I will be blogging during my blogging hiatus: the actual hiatus w/r/t blogging is going to be after I "come back," hopefully with lots of stockpiled small posts that I can use while I work on the big ones. I'll still be checking e-mail and comments and so forth during this time. I'm not disappearing from the earth, just relieving myself of the pressure to post something every day for a little while.

Anyway. Just so this post isn't completely without plant-related content, I've got a Ficus triangularis at home that recently produced a bunch of figs all over the place (the earlier post about Ficus triangularis figs was incorrect, I think: I now think that that plant was probably Ficus deltoidea instead. Or else the plant in this post is deltoidea.), and a Ficus benjamina that I started from cuttings at work last winter is figging out, too, but in a more colorful way. According to a PBS special I watched semi-recently, Ficus trees, or at least Ficus carica, the edible fig, produce figs at random points throughout the year so as to maintain the population of animals that spread and pollinate them. So the fact that there's been no consistency to the time of year on the figging-out posts previously (December/maclellandii, April/deltoidea, July/benjamina, September/triangularis and benjamina) is, actually, exactly what we should expect. Assuming that carica works the same as benjamina and triangularis and maclellandii and microcarpa/retusa and religiosa and all the others. Which may or may not be a safe assumption. We'll have to wait and see if different plants consistently flower at certain times of year.

So I leave you with: figs. 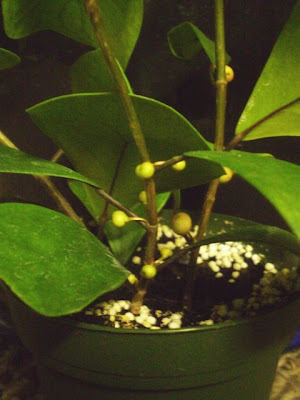 Ficus triangularis (unless it's deltoidea). 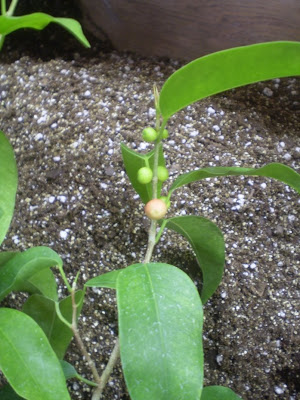 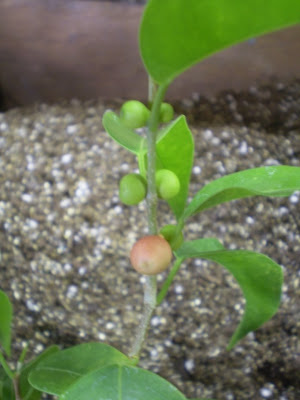 Ficus benjamina, slightly closer.
Posted by mr_subjunctive at 5:29 AM

OH my gosh! Those are some seriously cute little figgies!

Yeah, they're cute until you have to clean them up. A couple of years ago, we had a client (major sports arena) that had 28 large, old ficus on the club level indoors. We had to go on a weekend, take every one out of the pot to do some drainage/root work, then put them back. Nearly all of them were "figging out" at the time. When the figs get brown, they fall off easily and crunch underfoot like acorns.

So my job was vacuum cleaner detail. Vacuuming up fig crumbs for hours. UGH.

Mr S: please do all you can to enjoy your four day break to the max and dissolve into the coming season.

And feel the relief of knowing the mealy bugs are, for that delicious time, Someone Else's Problem.

I hope you get some much needed and well earned rest for the next few days! You really deserve it... We'll be here when you get back!

Aaaaarrrrr!!! Good for you for remembering Talk Like a Pirate Day, Mr. S! And who'd have thought Ficus benjamina actually bore figs?! (Not me, I grow the ones that produce fruit and tend to look like hell.) Can you eat them,and if so, how are they? Geez, I didn't realize anybody else posted daily besides us. (But, er, I should have, since of course I get your posts. Duh!) Anyway, of course we think that's terrific! So enjoy your break and we'll see you when you get back. Hope you're doing something at least mildly piratical!

I have a question! :) Are the little tiny figs edible by humans?

(I may be asking you that a lot. I like to know if I can eat stuff.)

As far as I'm aware, the figs aren't edible: I assume if they were then more people would be deliberately trying to grow them. It's not like I know somebody who's tried, though, so maybe they are. Either way, I'm thinking they're probably not very good.