Work-related: When Life Gives You Bromels

In either March or June, I forget which, we got in some ornamental pineapples (Ananas comosus 'Mongo') that had just begun to fruit, and they were pretty adorable. 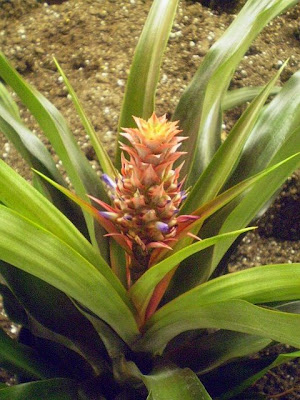 So of course none of the customers would touch them. (Stupid customers.) So as time went on, the pineapples got larger, and developed more and more crowns, and then eventually they all just flopped over on their stems and started crashing into other plants and sending up offsets from the soil all over and then the customers really didn't want them.

Well. When life gives you bromels, make bromelade.1 So we wound up dividing off the offsets, of which there were a couple per plant, and then we planted up some of the superfluous crowns from the top of the fruit, and that was pretty much that. Because when you have a plant that the customers don't want to buy, the thing to do is make more of them.2

Except: there wasn't a lot of room available for rooting stuff, so the superfluous crowns got put under a table to root.

So one day I'm looking under the table in question for some reason, and I notice that about half of them are laying around on the floor, chewed-up to varying degrees. The flat of Ananas had been next to a couple flats of other cuttings of things, and the plants next to the other flats were fine; the unblocked ones had been pulled out, which is obviously very suspicious. And then, as I'm picking them up and putting them back in their pots, I notice a certain chewedness: 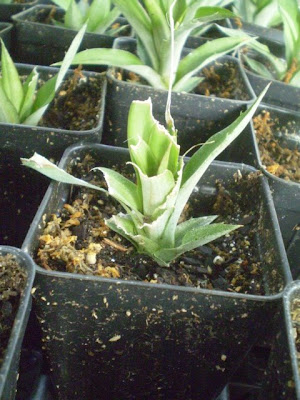 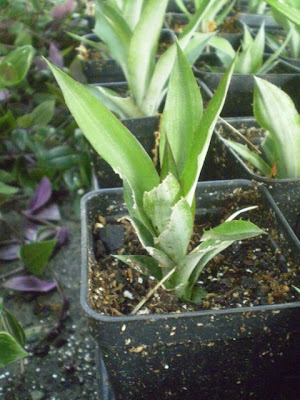 Bunnies! Bunnies! It must be bunnies!

Relatively soon, the door at that end of the greenhouse will be closed and covered with plastic, at which point the bunnies will have a tougher time getting in, and things like this won't happen for a while. But until then, I'll have to figure out how to protect certain of the cuttings, it looks like. Bunnies could be lurking anywhere. 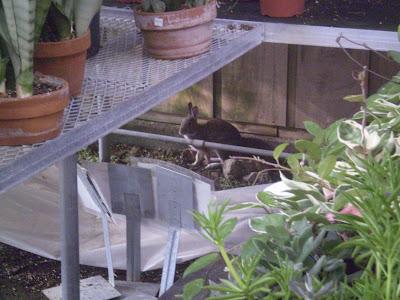 1 One of the people in the flower shop pronounces "bromeliad" as though it were "bromelade." Apparently no amount of teasing has been able to break her of the habit. I thought this was just a quirk specific to her at first, but I've had a number of customers say it that way too. One wonders how they pronounce "myriad," or refer to Homer's Iliad. And when life gives these people lemons, do they make luh-MOAN-ee-ads?
2 Not the actual thought process. WCW and I just kind of reflexively try to salvage things, partly because it's our nature to, and partly because the boss, when asked, will usually tell us to try to salvage anyway.
Posted by mr_subjunctive at 4:02 AM

Had I been one of the customers, I'd probably have purchased one. They are pretty cute. If the bunnies can't come in, will they get out if they are already in? I suppose they would have a nice life and plenty to eat and drink if forced to stay!
Aiyana

unrelated comment... can you talk a little bit about platycerium and if i can grow it in my bathroom?

When I saw the pic of the eaten leaves my mind first went to rats. How very urban gardener of me, eh?

I like that rule. It makes as much sense as most I live by.
"Chewedness" also has a certain charm.
--Kate

I liked Chewedness as well - describes well how Rabbits eat - though I didn't know they liked Broms.

The bunnies have options for getting out once they get in, though mostly I think they come through the door that opens onto the nursery lot, and that one's been closed lately because of the cooler weather. So I don't think they're coming in so much lately.

It might be a nice life, if you were a rabbit, I guess, though there is the matter of the weekly poison-spraying. I don't know how big of an obstacle that would be to living a happy bunny life.

I don't actually know a whole lot about Platycerium: I've never had one, and I hear somewhat conflicting things about their difficulty. They do need high light, which I'm guessing would probably be the critical factor w/r/t your bathroom, but otherwise my guess is that it'd probably be doable. You might try doing a search at Garden Web (no doubt they have a ferns forum) and see if anybody's bothered to put up some basic care info.

Well, I can't actually rule rats out entirely. Not that I've seen any rats in Iowa City, but I didn't actually see the eating, so possibly I've been engaging in some inadevertent bunny slander here. I have seen chipmunks in the greenhouse, too; I suspect there's one living in there somewhere though I can't prove that I'm always seeing the same individual. And once a shrew (I think). So rats wouldn't be out of the question.

I didn't know rabbits would eat bromeliads either, though I guess it makes sense: it's not a family known for having poisonous members, and Ananas actually has edible fruit. I'm a little surprised that that's the particular plant (of all the plants on the floor of the greenhouse) that they'd go for, though. I didn't see anything chewed besides the pineapples, and when I got the bunny photo in the post, I saw that particular rabbit eating a lot of greenhouse weeds, too, before I managed to chase him/r out the door. Which made me feel all conflicted. Wouldn't mind having some rabbits around if they'd stick to the weeds. They wouldn't, though. Wascawy wabbits.

One of the pineapples I'm growing was labelled as A. comosus 'Victoria.' I'm not really sure what kind of cultivar this really is, but it's incredibly spiny any I can't imagine anything chewing it.