What is it with desert plants wanting to put their flowers way high in the air, anyway? Are there no pollinators near the ground? I'm just wondering.

I've been waiting for this one for a while; we got it in June, and although it seemed to be doing more or less okay, the new leaves kept getting smaller and smaller, which irked me: now nobody's ever going to want to buy you, I told it. Then at some point I realized it was a flower spike, and stopped haranguing, because I figured surely it would sell once the flowers (which I was envisioning as tubular red-orange things, like on Bryophyllum tubiflorum and Bryophyllum daigremontianum) appeared. But no blooms appeared, for months: it just kept getting taller instead:

So finally they started to open, and they turn out not to be all that terribly interesting: like K. blossfeldiana, but without the bright colors or abundance of flowers that makes blossfeldiana (barely) worthwhile. 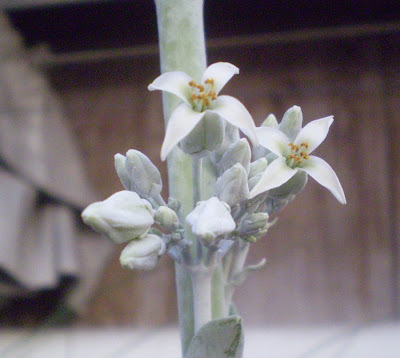 I suppose I shouldn't be all that surprised. I tried to keep one of these indoors once, several years back, and then again in the last couple years, and . . . let's just say that this is not the first time this plant has disappointed me.

Probably some of the stretching is because it's not getting enough light. There's only so much I can do about that, unfortunately: the greenhouse only gets what the sky gives it. Maybe when I finish my weather-control ray.

A lot of succulents shoot up a long inflorescense. It is fun to see what it does even if not particularly attractive. The large leaves are the desirable part.
Donna

I'm in the process of killing one of these paddle plants right now. It started losing leaves the moment I brought it home. I don't know why I bother with succulents anymore but I'm a sucker for the fat, colorful leaves.

As for the lofty flowers, if my pollinators were bats or moths and my deserty population was sparse, I'd advertise as high as I could, too!

Those Kalanchoes do not survive the blooming. If it had sent off offsets first, then those might have made it, but those giant bloomstalks take a lot of energy from the plant.

It won't start offsetting as it dies? If I remember right, one of my two K. thyrsifolia attempts at home produced offsets while it died.

Too little, too late, of course: the plants that want to stay in my good graces know to offset before dying. But still. Is it possible that we'll still see offsets before it's all over?