But I have a plant at home that's trying something different, apparently.

I bought this -- some Vriesea of unknown variety, which I wrote about a while back -- partly because it had five pups on it already. Seemed like a good deal to get six plants for the price of one. I divided the plant, and the five offsets took, and that should have been the last interesting thing to happen to these plants until they began to flower.

But one of the offsets has decided to skip the flowering step and go directly to making offsets. So now I have a grandpup. 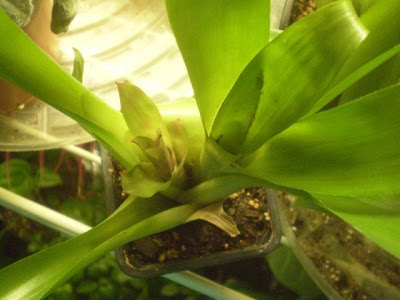 The parent plant is also producing an offset, again, though that's not such a shocker, since producing offsets is more or less what it's supposed to be doing. But I have no explanation for the offsetting offset. I've never seen this happen with any other bromeliad, including the hundred or so Vriesea offsets from the same batch of original plants as mine. So it's got to be fairly unusual. Am I being cheated out of flowers? Am I being abundantly rewarded for separating the offsets? Is this as unusual as I think it is, or am I just not particularly experienced with this plant? Just what exactly is going on here, and why, and is it good?

plants are the strangest people for sure!

I wonder if, when you split the original offset, you took a small proto-offset with it unintentionally.

Just making up words and guessing.

maybe the offset already flowered before you bought it?

No. The offset isn't that old: the original plant only flowered in spring/summer 2008. It grew five offsets between June and October, and then in October I divided the five offsets off. I would have noticed if there'd been any new flowering going on.

Though, even if it had flowered again somewhere between October and now, that would still sort of be a puzzle, 'cause they're not supposed to do that so soon after flowering either.