Hello, and welcome to the latest installment of the roadside flower series. This particular batch was all (with two exceptions) taken on Sunday, July 26, so they're not quite August flowers, but I figure they're all probably still blooming today, so it's close enough for PATSP. All of these pictures (again, with the two exceptions) were taken along the side of gravel roads between Iowa City and Lone Tree: not in somebody's garden, not in a park, just there next to the cornfields, getting covered repeatedly by gravel dust, soaking up car exhaust.

As always, the IDs are a little sketchy, and there are a few things I couldn't ID at all, so anybody who wants to suggest or confirm names is encouraged to do so. In fact, let's just begin with a kinda ugly NOID: 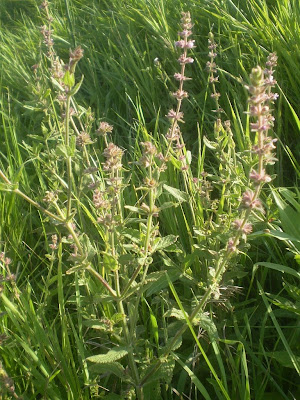 It looks a lot like a mint of some kind, which would make sense, but I couldn't find any pictures of mint flowers on-line that looked like this. There were a few things that looked similar, but were much, much shorter than these. 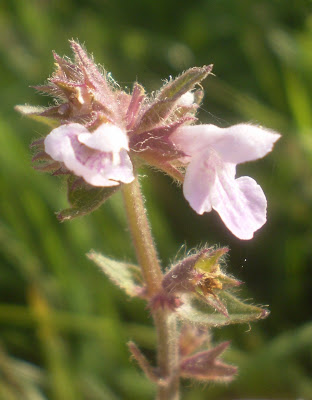 Close-up of the possible mint. 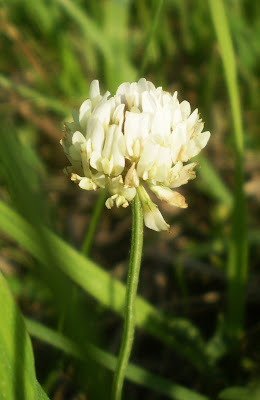 Trifolium repens, white clover. I like white clover, though I blame it for a childhood bee sting: I was maybe eight, barefoot in the yard, and stepped on some clover that happened to contain a bee. The bee stung me dead center in the bottom of my foot. The surprise of the pain was worse than the pain of the pain, but either way it sucked. 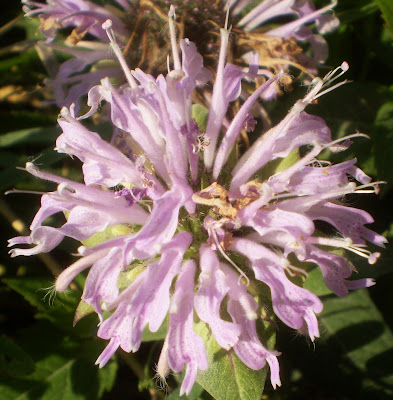 We've had Monarda blooming everywhere along the side of the road for quite a while now, and I just haven't bothered to get a picture before now. I probably should have gotten one earlier, because now they're all half-dead and beaten up like this one. Though Monarda kind of tends to look that way even when totally fresh. So perhaps I exaggerate. 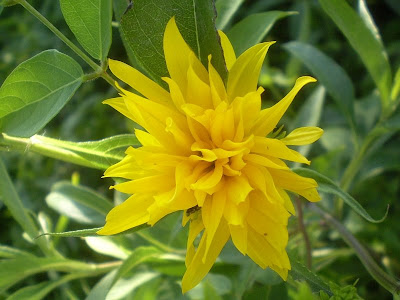 We have several tall yellow flowers sort of in this general category blooming right now, though I didn't get pictures of the others. I'm not sure what this one is, though if forced to guess, I would guess Helianthus of some kind. (And if forced to be more specific, I would guess H. grosseserratus, but both of these would be something of a wild stab in the dark.) 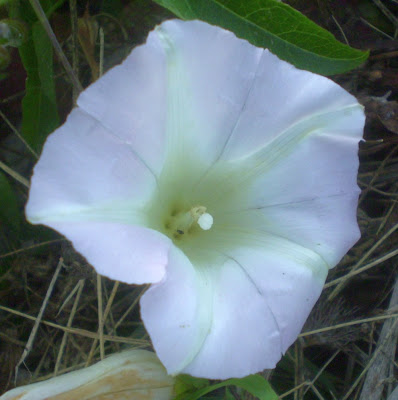 Field bindweed, Convolvulus arvensis. Pretty sure. I'm not a fan. 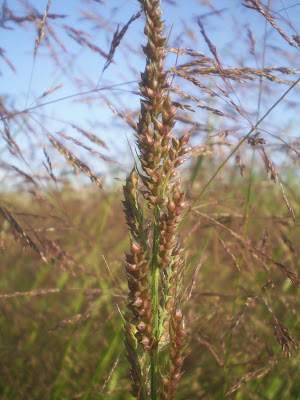 I feel very strongly like I ought to know this one, but I don't. Technically not a flower picture, but a seed-head picture, I include it here in the hopes of finding out what it is. Also it's a pretty decent picture, if I do say so myself. Which I do. Say so. 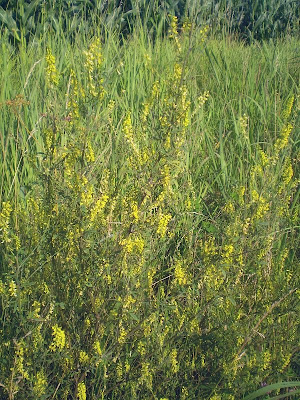 Yellow sweet clover, Melilotus officinalis. Despite claims of a sweet odor from the whole plant, I can't say I noticed anything when I was there taking the picture. Considerably more information about this plant can be found here. 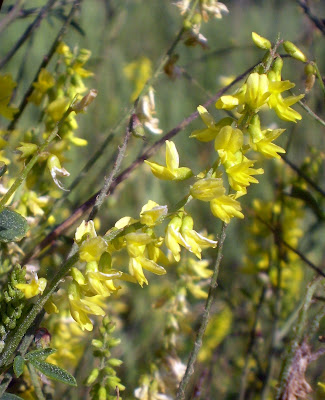 Close-up of the flowers. This is a terrible plant to try to photograph, by the way. Not substantial enough to engage the autofocus, sways terribly with the slightest breeze, and doesn't show up against any green background. 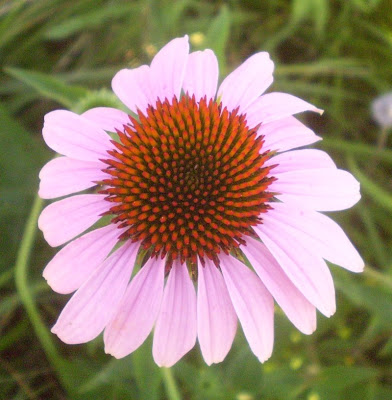 Purple coneflower, Echinacea purpurea. These are all over the place at the moment, often mixed in with the black-eyed susans (Rudbekia hirta), and the two are actually very pretty together. I don't remember noticing these around when I was a kid, also in Iowa, which is weird however you explain it. Either people have suddenly started to deliberately cultivate Echinacea in their ditches and fields when they used to mow them down, or I was completely oblivious to a large, abundant, brightly-colored flower as a child. I didn't notice everything, I know, but I surely would have noticed these if they'd been around. So it's a puzzle. 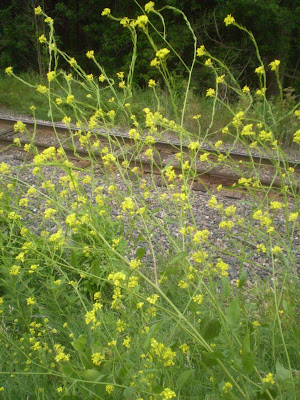 This is one of the two exceptions to the July-27 rule. This was taken in the same general area as the metal llama lawn ornament, though I've seen the plant closer to home, too. 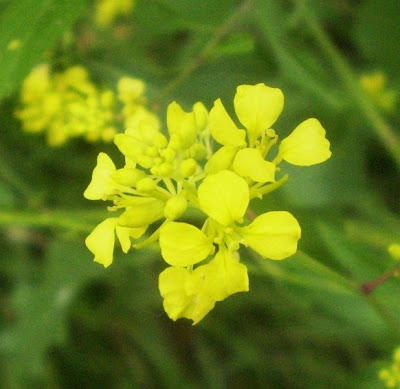 This is a closer view of the flowers on the above plant. I have no idea what it is whatsoever.

UPDATE: Lynn'sgarden, in comments, suggests wild mustard. There appear to be a few different things going by that name, in the Brassica, Hirschfeldia and Sinapis (on some pages, spelled Synapis) genera, some of which may be obsolete names. I totally agree that the flowers look like they belong in one of those, but I can't pin it down to any species in particular; the flowers all look more or less the same, but the growth habits never manage to match up right. Call it pending.

SECOND UPDATE: I lean toward Brassica rapa, I think, even though most of the B. rapa pictures I found don't look quite right, because this is for sure the same plant, and that's how it's identified there. 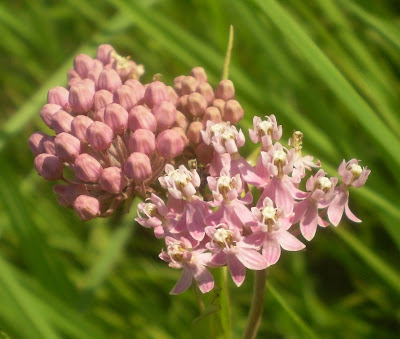 Asclepias incarnata. This is the only one of these I've found so far this year. Lots of A. syriaca, not so much A. incarnata. Maybe I'm looking in the wrong places. 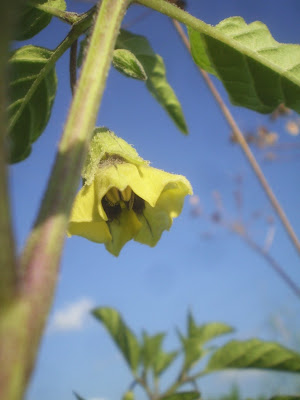 I want to guess it's a tomatillo (Physalis philadelphica)? It did have little pod-like things like tomatillos have (though they seemed to be empty, one supposes the fruits were just undeveloped), and it was unmistakably in the Solanaceae. The flowers don't quite match the pictures I found of them on-line, though, so I'm unsure about the ID. I also have no idea what one would be doing growing on the side of the road in a ditch, which is where this one was.

UPDATE: Thanks to Claude in comments, I have switched my guess to Physalis longifolia, or common groundcherry, which is the most common wild Physalis species in Missouri, according to this site. The leaves also match. Blue vervain, Verbena hastata. I've been seeing these from the car, all blurry with speed, trying to figure out what they were, and I'd concluded that they were probably not that interesting. So it's cool to get up close and see that no, they're actually very nice. 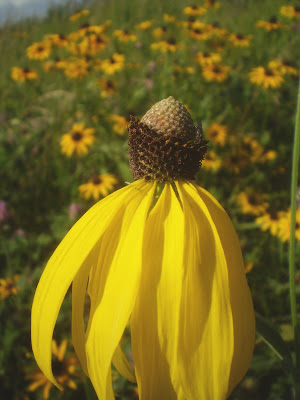 Yellow coneflower, Echinacea paradoxa. This is another one that solved a question for me: I've been seeing lots of yellow flowers in large masses along the side of the roads as we drive by, most of which were Rudbekia hirta (black-eyed susan) and therefore not terribly interesting, but in certain spots the Rudbekias seemed to be holding their petals differently, and a slightly different shade of yellow, which was puzzling. Now I know that the Rudbekias looked funny because they were, in fact, Echinaceas.

UPDATE: Rosemary, in comments, suggests that this is probably prairie coneflower, Ratibida pinnata, instead of Echinacea paradoxa. I am especially pleased to know this, because I was passing on someone else's misidentification before she told me this. I'm sure it happens more often than I'd like, but I do try not to perpetuate bad information.
Posted by mr_subjunctive at 2:30 AM

I think I've mentioned before that I don't know much about wildflowers in your area. I can however tell you this... that's not a tomatillo, but you're close. It's a ground cherry. There are several species, so the one in your area is beyond me... the fruit are undeveloped because it's too early for them, but come this fall the fruit will have developed, the husk will have peeled back and the small yellow tomato looking fruit will be displayed. Some species can be used for food... some can't.

Oh, I can help...a little. The first photo is definitely from the sage/salvia family. The foliage do look like mint leaves. Not sure what that native wild grass is but I just want to say what a pretty photo! The yellow after the coneflower is wild mustard. A field of these intense yellow blooms is always a beautiful sight. Love the pink asclepias, too. And the next photo could possibly also be wild chinese lanterns...? The leaves look like it...if native, they just bloom those insignificant flowers and don't develop fully into the cool orange pods. Claude's name of ground cherry is also what it goes by...I think. Sorry I'm not giving you correct botanical names...not my strong suit...lol.

It always amazes me how well these roadside flowers perform! Nobody pampers them, and they are OK!

You're a bit north of the range USDA gives for Echinacea paradoxa. I'm wondering if your yellow composite flower with reflexed petals is actually Ratibida pinnata.

Being from Phoenix, where nothing grows by the side of the road, except tumbleweed, I really enjoyed seeing these pictures.

Yes, I do agree that these roadside flowers are very pretty.

Please die in a fire.