This leaf is roughly 9 inches (23 cm) across and two feet (61 cm) long. The plant just kind of threw it out there earlier this summer, and I just noticed that it's starting to make another one, which will probably be as large or larger. I've had the plant almost exactly a year now (18 Aug 2008) and wasn't sure what to expect from it after the move, since it was fairly unhappy with me during the winter last year. (Totally my fault: I didn't have a good place to put it, so it lived in the bathroom, which was warm but kind of dark and had really variable humidity. Still the best humidity the apartment had to offer, but it fluctuated a lot according to when the last shower was taken and by whom.)

But apparently all is forgiven now that it's in a nice bright north window in the plant room: 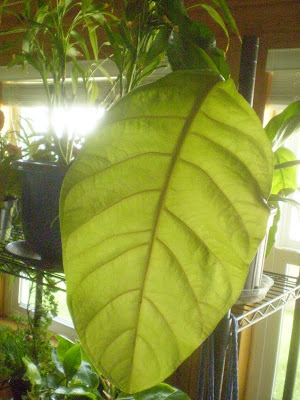 It's very hard to photograph anything in the plant room. I either need more artificial light inside, or I need shades I can pull to block light from outside. Neither of these is going to be happening anytime soon.1
I don't exactly know what it is. It was sold to us at work as Anthurium hookeri, and there is an actual plant which is properly called Anthurium hookeri, but the two plants are not the same. Most plants in the nursery trade which go by A. hookeri are actually hybrids of unknown Anthurium species: the real A. hookeri has regularly-spaced major veins, smooth, unruffled leaf margins, and black dots on the underside of the leaves. (More precise information, and pictures of the genuine hookeri, can be found here.)

I still call my plant A. hookeri, though I usually put "hookeri" in quotes, since I don't have a better name for it. ("Anthurium NOID" is not better, for me: I have a hard time remembering that that doesn't mean one of the A. andraeanum or A. scherzerianum cultivars.) The plant, obviously, doesn't care what I call it. 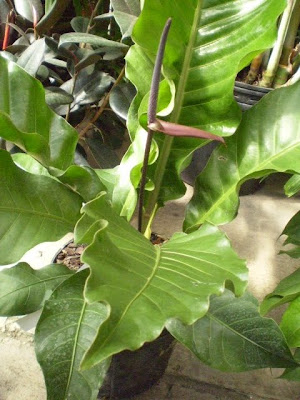 Not my plant: this is a larger one that we got at work before I bought mine. It's not necessarily the same hybrid as mine, but it's similar. The inflorescence is relatively clear in this picture, and is more or less the same as the inflorescence I've seen on plants like my own. My plant has not, to the best of my recollection, flowered.
WCW got one of these at the same time I did, and last I heard hers was doing okay, though she said it had produced a couple leaves with ragged, torn leaves last winter. Mine did too: I think this is a humidity and/or temperature problem.

WCW also got a different bird's-nest Anthurium with heavier, narrow leaves, which was called A. crenata and which is also probably a hybrid being sold under the wrong name.2 WCW said it was doing the same thing: new, ragged leaves. I think there might also have been a bug problem with her crenata, but I don't remember. All I'm sure about is that she gave me the impression that crenata was much more problematic, despite looking like it would be less delicate than "hookeri."

We had a crenata in the greenhouse for a very long time; I can't remember whether I saw it the last time I was there or not. I would have been tempted had it been smaller and cheaper.

But "hookeri" is plenty, really. I don't know if I necessarily recommend it as a houseplant; my impression is that it's been fairly good about bugs, over- and underwatering, doesn't need much for grooming, and will put up with fairly low light if it has to,3 but temperature and humidity are potentially a big issue and I would be surprised if it were propagatable indoors. It can also become enormous: after I left, work got in a huge one that was probably five feet wide and four feet tall. (I tried to get pictures, but none of them turned out. I'll try again sometime.) I'll get to a plant profile sooner or later, and we'll see how I feel about it then,4 but so far, it's earned a PATSP difficulty rating of about 4.4, only slightly worse than average difficulty. Knock wood that it stays there.

-
1 I actually do have shades I can pull, but they're inside, and I have to reach through the plants (some of which are sharp, or fragile, or huge) in order to grab the cords, and it's too much trouble to go to just for one lousy picture.
2 (Unlike for A. hookeri, though, there is no actual A. crenata: there's an A. crenatum, but no A. crenata. So this is arguably a case like for Cereus peruvianus, where you may as well call it by the fake botanical name.)
3 I should note that I think the large leaf is, in part, the plant's way of asking for more light: while the newer leaves are generally larger and larger as the plant ages, the overall shape in a healthy, outdoor-grown plant tends to be longer and narrower than on my plant, and also they're usually held more vertically. The new leaf's size and shape might only reflect the fact that it's getting all of its light from one side, rather than overhead like it would if it were being grown outdoors, but I'm not sure. It doesn't really seem to be complaining much either way, but I am a little nervous about the possibility that I'm mistreating it.
4 Speaking of the plant profiles, the last real one of which was in mid-March (I don't think Plasticum et al. should count), I'm back to doing those again. I'm planning Streptocarpus as a two-parter, coming next Monday and Thursday, assuming that I can get all the links in and footnotes footnoted and etc. in time. If your interest needs piquing, the "person" selected to go with Streptocarpus is "Air Traffic Controller," though that won't really make sense until the second part. And it may not make sense even then.
Posted by mr_subjunctive at 2:30 AM

Two ft. long?! That is one huge a** of a leaf! And definitely not your typical waxy look of an anthurium, like the second photo. Almost transparent in the light. I would be interested to see the whole plant though since it's hard to tell in the photo where this leaf is actually coming from...lol. Knocking on wood...