Okay. So, when we left Part I, I was promising jokes, light refreshments, and nectar guides. Help yourself to some soda/cookies/nuts/whatever, and then we'll get started. 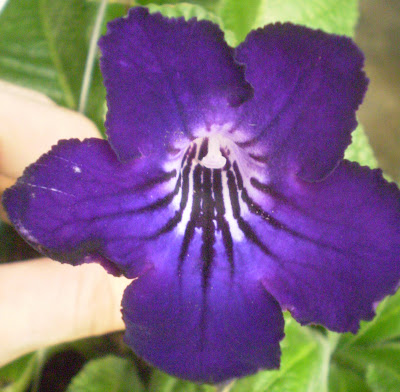 Streptocarpus 'Purple Martin,' with really obvious nectar guides.
Nectar guides are, like they sound, markings on the flower which guide pollinators toward the nectar. In some plants (e.g. black-eyed susan, Rudbekia hirta, or Gazania), the flower guide is simply a dark spot1 around the center of the flower. Other plants make the whole flower dark but make the pollen stand out very brightly (Zantedeschia does this in UV, as does Glechoma hederacea), and still others draw lines or spots which point toward the nectar (Digitalis, Streptocarpus, Geranium, Viola). 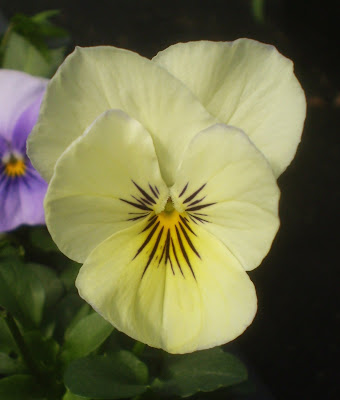 Viola NOID, also with really obvious nectar guides.
I admit to being kind of puzzled about this, initially. To my thinking, the flower itself should be advertisement enough. I mean, bees aren't usually that much smaller than a lot of the flowers they pollinate, so if they wandered around on the flower for a second or two they would find the nectar anyway, whether there were "EAT AT JOE'S" signs or not. And it's not like their eyesight is particularly bad, considering that they can clearly manage to see small distant objects pretty accurately in order to find the flowers at all.2 So what does the plant get out of this? What, for that matter, do the bees get out of it?

My best guess is that it's worth the effort for the flowers because there are a limited number of bees, and each bee can only visit a limited number of flowers in a day (or season, or whatever). If you want all the flowers in a field to have the best possible chances of being pollinated, it's helpful to make it as obvious as possible where the nectar is, to minimize time spent fumbling around trying to find the nectar. It may not seem like that big of a deal, but if you're competing with other plants for pollinators, any advantage you can get over your competition, everything else being equal, is going to be helpful. If you can get eighty pollinations in an hour when everybody else is only getting seventy-eight, you will inherit the earth. So it can be worth it to become an air traffic controller.

And if you're a bee? Well, obviously you can collect more nectar in a given amount of time if you don't have to fumble around looking for it, which enables you to bring back more nectar, which means you can raise more baby bees. That much is pretty straightforward, actually. Streptocarpus 'Falling Stars:' slight nectar guides are present, but they're not very pronounced.
This waste-of-time theory has been observed in the wild, on a Delphinium species which produces both normally-colored flowers with nectar guides and albino flowers with no markings: both hummingbirds and butterflies took longer to pollinate the albino flowers. The researchers went the extra step to verify that this was because of the lack of guides, and not just that the hummingbirds and butterflies were less enthusiastic about white flowers, by painting nectar guides on the petals, and painting other petals on the same flower blue, and then timing the pollinators again. They even made sure that the change wasn't just because the pollinators were attracted to the paint, by painting blue flowers that were already blue and comparing the response.3 (ref.: .pdf file)

As with human air traffic control, certain conventions have arisen to make everything run smoothly.6 Nectar guides are often in specific colors, either yellow or "negative ultraviolet."7 In some plants, the nectar guide, but not the rest of the flower, changes color when the flower has been successfully pollinated, signalling pollinators to move along to the next flower and not waste their time with this one. 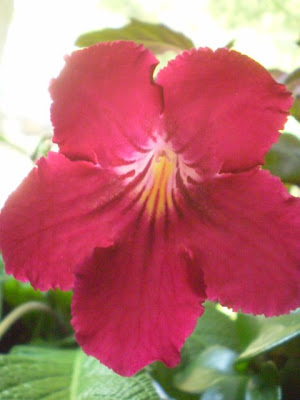 Streptocarpus 'Tanager,' with relatively strong but somewhat shortened nectar guides, relative to 'Purple Martin.'
Streptocarpus nectar guides are relatively obvious and straightforward, at least in most cultivated varieties, though as with most things, if you get to digging around in the literature, you find some cool details. Most cultivated Streptocarpus are hybrids, with the bulk of their genes coming from the lavender-colored S. rexii, which displays very prominent nectar guides and is pollinated by bees. However, not all Streptocarpus species are bee-pollinated: some, like S. dunnii, are pollinated by birds instead, and lack nectar guides altogether. (ref.) Such species also show other signs of being specifically adapted against pollination by bees.8, 9

When I first had the idea of going with "Air Traffic Controller" for Streptocarpus, I wasn't really thinking about that choice much beyond the fact that it uses nectar guides, and I wasn't sure that was really enough to hang the choice of "person" on. Seems kind of minor, you know? But it turns out that this was even more apt than I imagined, because not only do Streptocarpus spp. use nectar guides to point pollinators to nectar, but they also use different colors when talking to different pollinators, and send them different signals about when and where to land. It really was the right choice. I love it when these profiles work out that way. (You can tell I'm excited when the footnotes have footnotes.)

Oh, the poor tortured honeybee artists; I had no idea!

Your talk of seeing green+ultraviolet makes me think of Terry Pratchett. In Discworld, octarine is the color of magic and is described as a fluorescent greenish-yellow purple, and can only be seen by wizards and cats. Maybe also by bees!

What a priceless post, Mr. S.! I especially love the footnotes. (And I of course loved your comment about those hideous Echinacea cultivars. Ugh!) You have really outdone yourself! Regards to Nina.

Mr. Subj...you've come full circle with the Air Traffic Control comments! Last post, I was thinking "whaaaa??" but I totally get it now! Indepth AND entertaining(love footnote #3~lol!)
And to think I just thought these nectar guides were just pretty markings on a bloom...a whole scientific study...WOW!

LOL the honeybee artists! The little tortured souls. I wonder if bees reflect or fluoresce under UV? Wasn't able to come up with any UV pictures of bees, just right off the bat.

I think more on the honeybee artists is in order. May have to get out and ask a few bees for directions to the nearest bee gallery.