Another short post to give everybody time to catch up.

Advanced students may wish to check out this .pdf file, which location was mailed to me last night by David, a PATSP reader and contributor at Kitchen and Residential Design, and which is a copy of Backster's original publication in the Winter 1968 International Journal of Parapsychology. Overall, I feel like I understand the experiment better, and I'm not inclined to retract anything from the posts so far. For example, I was kind of startled to realize that the original paper is based on only seven runs of the Brine Shrimp Boilatron (my name for it). He did use three sets of electrodes on each plant, for the seven runs, resulting in 21 graphs. He does report better results than chance, but of course he also threw out eight of those graphs for one reason or another, which seems like a lot to be disregarding, and for stupid reasons.

Anyway. Read it yourself if you like. Or don't. Either way, I don't find myself wanting to take back anything I said in the earlier posts. On the one hand, his results are better than random chance (once he throws a large chunk of them out), but on the other, there's not a lot of data being considered, either. Considering the magnitude of what he claims is happening, I was kind of expecting better. Or at least more. I still wouldn't mind trying it for myself, though.

Meanwhile, I have an extra day to try to figure out Cleve Backster Part III. I have a complete post written, so it's not that the post is unfinished. It's just the kind of finished where I might decide at 9 PM tonight that two-thirds of it needs to be thrown out and re-written. Part III has been kind of problematic throughout the whole writing process; anything could still happen.

I will be glad when Cleve Backster and I are allowed to see other people.

Anyway. Onward, to the lily. Saw this in Cedar Rapids a couple weeks ago, at Frontier Garden Center. There were several other varieties there, but this was my favorite. The picture, sadly, doesn't really do it justice. 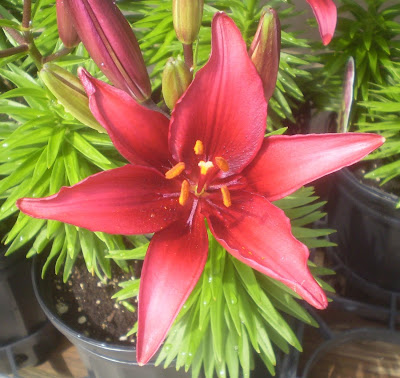 The timing seemed weird, though: it looked like they'd just gotten a bunch of these in. (Lowe's, too, a few days ago when the husband and I were there.) They were all really pristine and brand new. But isn't it too late for Asiatic lilies? Or is this when you're supposed to plant them?

Hmmm. Not only do I question the timing, but why would someone name a red-flowered lily 'Tiny Ghost'?! As for Baxter, people who boil brine shrimp alive in the name of pseudo-science make my blood, well, boil. He should have boiled some spinach or, say, stuck his own hand in the water and charted the plants' reactions!

'Tiny Ghost' didn't make much sense to me either. There is a whole series of Lilium named Tiny something or other, though. "Ghost" doesn't seem right for a red flower, but they didn't ask me. Or you either, for that matter.

I attempted to read the enclosed file but after the first paragraph...yikes! And it's a whole book? I will pass, thank you very much! Asiatics forced to bloom now wouldn't be ideal for adding to the garden...unless it's a new variety for the fall garden?? The foliage seem lighter in color and finer in texture than the norm...pretty nonetheless.

It does look pretty short, so at least the "Tiny" part makes sense. But "Ghost"? And it does seem late to me too.

I would have expected 'Tiny Ghost' to be a dwarf white flowered variety. Strange.

I imagine that the orange/yellow/red lilies would be popular now even if it's not the greatest time to be planting. We get a lot of hardy plants in around now as "fall annuals" including coral bells and even little 4" pots of Euonymus so it's possible this is why there are a lot of these around now?