This is not my personal plant; it's from where I used to work. I've never tried Stephanotis indoors and think it's unlikely that I ever will; according to WCW, they tend to be buggy. But this was still pretty damned cool. 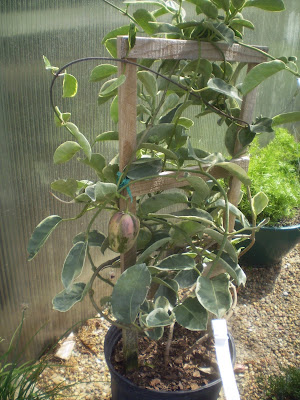 I don't know much about this besides what's obvious from the picture; they wouldn't have deliberately tried to pollinate it, so I assume it was already doing this when it arrived a few months ago. Either that or something pollinated it while it was in the greenhouse (which is uncommon, but did happen sometimes). The fruit is approximately three inches long (a guess), more or less the size and weight of a Roma tomato. I saw it again a couple weeks after taking this picture, and it seemed to be about the same size, so either this is as big as they get, or it develops slowly. 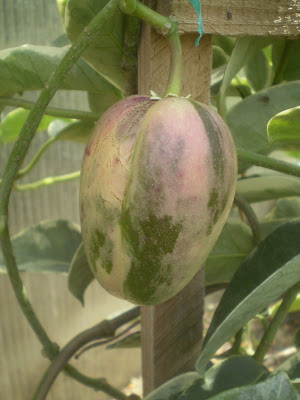 If the plant doesn't sell right away, I'll try to check in on it from time to time and give you updates, but I bet it sells sooner rather than later.

QUICKLY REVISED LAST NIGHT TO ADD: Well, it hasn't sold yet. As circumstances had it, I needed to go in to buy some stuff yesterday, and I checked on the plant while there. You can see it's gotten a little longer since the first two pictures were taken. (I'm not sure, unfortunately, how long ago that was: the photo is dated 17 Sep, but that's just the day I named and saved those particular pictures, not necessarily the day they were taken. Maybe it's been a month?) 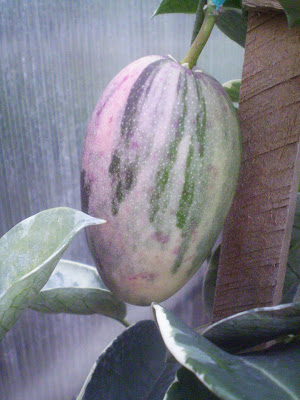 I also talked to WCW about it; she said that when the current greenhouse person talked to our supplier about this, the supplier sounded all amazed and said that this never happens, nobody'd ever seen it before down there in Florida, and she wanted to see a picture. Possibly the actual conversation was different than that, but in any case I get the strong sense that this is something unusual. Some googling turned up a few references to it (and one YouTube video of a Stephanotis fruit being dissected), including a UBC Botanical Garden Forum thread which included instructions for how to harvest and sow seed from Stephanotis fruit, so it's something that has happened before in human history. Though I could believe that variegated ones don't fruit very often. In any case, it's something I'd never seen before.

Rumor has it that the fruit is not edible, alas.

You're right on the buggy comment. Probably due to it's sticky, sweet sap. The fragrance is heady, though, and I'm always willing to give them another try!
This variegated one is nice but that fruit...amazing!

Wow, that's very cool, Mr. S.! And the fruit is simply gorgeous. Thanks for showing!!!

That fruit is very cool!

Hi, stumbled across your blog while researching the Stephanotis floribunda plant I have growing here in Queensland. Ours has just started to develop fruit - it has been in the garden for six years and this is the first year it has flowered profusely and the first time ever it has had fruit growing, can't wait to see how it develops - the perfume of the flowers is wonderful

My stephanotis has 2 fruits & they are the size of a small pear. I am in Hawaii & the plant is on my lanai (terrace) growing in a pot. I was searching on the internet about the fruit & how to propagate the plant. In our tropical climate stephanotis do very well & i have seen the fruits growing on vines before!