I took two cuttings of Tetrastigma voinierianum home with me from work as I was leaving last May. Stuck them in potting mix at home, and waited. One died; the second had rooted well enough by September that I declared it an official plant and added it to the plant count and all that.

They're supposed to be super-fast, super-aggressive growers, provided you can give them enough heat and humidity, but mine did nothing for four months after I made it official. During the mid-January round of watering, though, I saw this: 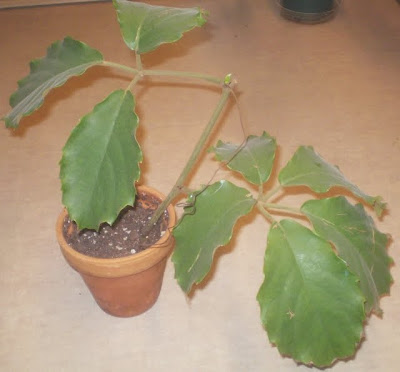 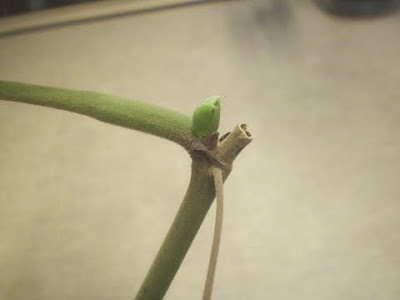 The reader will be forgiven for not understanding why this is a big deal, but I think it shouldn't be so hard to figure out why I'm kind of excited to see a plant do something, anything, after an eight-month wait. I've waited longer for less, though, I suppose.

Once Tetrastigma starts, though, it works pretty fast. The below picture is the same bud, only five days later: 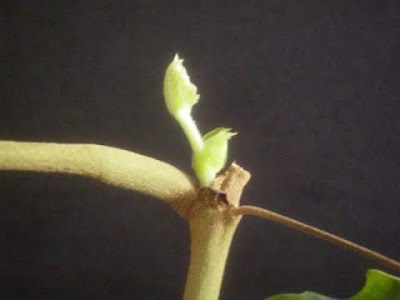 This, of course, brings with it a whole new host of problems, as every source I've seen mention this plant underlines that it can get huge very rapidly. Below is the parent plant, in what looks like maybe a 10-inch pot. 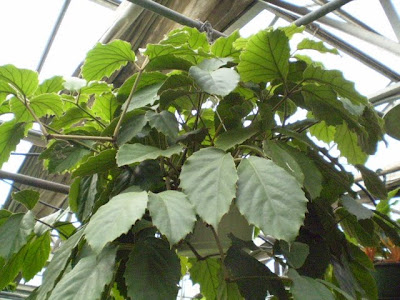 It didn't grow terribly fast at work, mostly, I think, because we weren't watering it enough, and it was rootbound. I moved it up twice in the year and a half I worked there, into a 12-inch pot and a 14-inch pot, and it wasn't until it got into the 14-incher that it really took off and grew, growing tendrils that wrapped around anything handy and carrying itself along some of the support bars for the greenhouse ceiling.

Which I guess I can look forward to something similar, in the near future. Should be a good time.

Oooh - so jealous! Tetrastigma is one of the plants I really, really want, and the only reason I'm even considering going back to my ex-workplace (don't want to see the people again, but I have to beg them for cuttings).
The thing with Tetrastigmas is, apparently, that they drop their buds/growing points if they get too dry... which was why we didn't have any good material for cuttings when I left. There were... ahem... issues with the watering all summer. Which I will not think about now, it's such a lovely day, and I don't want to spoil it. ;)

There are a bunch of these at the UWO Greenhouses. I really like them. Congrats on another successful rooting!

I don't remember us ever having any growing points dying on ours, and I'm pretty sure it was always drier than it wanted to be, possibly because I was the only one who ever watered it. (Or maybe it just felt that way. Perhaps both.) It just didn't grow very fast until after the second repotting, and even then, it probably could have gone faster if there'd been more water available to it.

I'm a little nervous about having one in here; I don't have that much room left, much less room that's brightly-lit and humid.

Also -- is that a blog I see, linked to your handle?

You are so patient - I'd probably have pitched it after 2 months. So is this the indoor plant version of Kudzu?

Yeah... got bored/didn't want to spread my ramblings across several message boards any more, so I decided I might as well start one. We'll see how long I keep up with it!

Well, whether it's kudzu-like or not remains to be seen; my understanding is that it'll only grow fast with a lot of heat, light and humidity, and I don't know whether I can supply that much of those things yet. But we're about to find out, I guess.

And I'm actually considerably more patient than that, even: I have one Euphorbia ammak cutting that I've been waiting to see roots on since June 2007. Any day now, I'm sure.

What I'd been meaning to post earlier, before my brainspace got stolen by cat, cooking, and cuttings:
If it only got "drier than it wanted to be", it was probably still wetter than our designated "mother plant", which was out of sight in a corner of the most argued-about greenhouse (which no-one wanted to water), in a place that wasn't reached by the irrigation thingy (I really need to find out the proper English word!) I'd say it was lucky to be watered once a week, even in summer.

Wow that's my kind of plant: something that grows out of control. Is this one of those plants that just keep growing no matter how you take care of it? It's probably pretty water intensive too huh?

Quite the opposite, actually. It grows like crazy if you give it the care it wants, and basically not at all if you don't. And yes, part of what it wants is a lot of water.

Hey Mr. S: What happened to the one Euphorbia ammak that DID root? Is it going in some visible way?

It grew about three and a half inches and then appears to have stopped. I assume this is a temporary stop, not a permanent stop, but with E. ammak the two can look a lot alike.

Oh I see. Any recommendations on the type of plant that will just keep growing no matter what? ;-) I figured I should have one of those types while I'm trying to figure out how to be a good gardener.

They're not the world's most fascinating plants, but as indoor plants go, Plectranthus nummularius, Tradescantia pallida, Tradescantia zebrina, Monstera deliciosa, Ardisia elliptica, and Pandanus veitchii are all at least moderately unstoppable. And fast.

Though some of them are also invasive, so be careful about letting them outside.

Do they have common names? The seedling bank guy might scratch his head if I start mentioning those names.

The common names for them I know are, respectively, Swedish ivy, purple heart, wandering Jew, split-leaf philodendron, shoebutton tree, and screw pine. Though not everybody knows them by those names, so there could still be head-scratching.

I bought a plant like this from pleasant valley some years ago. It's very large now and I've never been able to get a cutting to root for me. So i'm impressed.

I'll check those out next time I buy plants and I'll let you know how much head scratching went on.

In the meantime, I succumbed to my love for flowering plants and bought petunias. Not quite the indoor plants I was looking for, but very pleasing to the eyes.

I love these. I've got two! I'm considering usin them to take over the world.

I know its a year since all of you have posted but I really wanted to share my tetra story. I have been searching the internet for info on this guy however, I am finding that what it apparantly needs, is not what I've been providing mine for the last 6 years. (Why I'm looking up info now - I don't know). Anyways, I live in Alberta, Canada and if you are unfamiliar with this part of the world it's like living in Montana. Incredibly cold in winter, no moisture in the air - AT ALL, so I'm not sure what humidity is (ha ha - I know from travelling to Mexico)but everything the plant needs, I am not providing, however someone didn't tell my plant this. It is HUGE. I water it, then I forget to, then I give it too much. All in all I would have to say that it is a stupendous plant and I love it immensley. If I could figure out how to send a picture I would.

Ahh I finally figured out what my plant is! A tetra! My husband jokes that all we need to do is throw it a steak once in a while. It is a beast, a lovely huge beast. I have had excellent luck with my tetra placed outside in a shady spot where I can keep an eye on it. It needs water, it needs feeding but cool and humidity? Nope! I live in Tucson, Arizona and mine is the descendant of a cutting from my mother. I make several cuttings every year, root them inside and pass them to friends and relatives. Everyone wants one. They do take a good long time to root, indoors and often on a shelf above my kitchen sink where they get humidity and supervision.