(Sorry this is up late. Daylight Saving Time is responsible.)

Fervor's left me both pretty exhausted and without as much time as I'd hoped, so the posts for the next couple weeks might be a little lighter on text and photos than had previously been the case, except for Part II of the Phalaenopsis profile, which is already written. Maybe there'll be something more substantial if I can clean up one of the essays I've been sitting on.

I don't think this will be permanent: we just need to get some kind of routine established, and then posts will return to normal. It's probably good that this is all happening around the PATSP spring hiatus, when I wouldn't be posting anyway.

So what I've come up with for today are the recent acquisitions. Some of these I bought last week (6 March) and some I bought two weeks ago (27 February). I seem to be over my cactus phase, and back to the tried-and-true Euphorbias and Aloes again.

IDs are from the plants' labels and are not necessarily guaranteed to be correct. If you think that one of them is misidentified, please let me know. 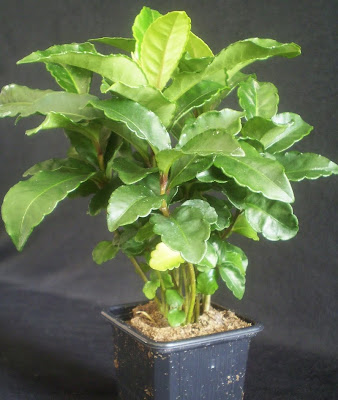 Ardisia crenata.
I bought this one to replace an Ardisia crenata I lost during the winter. It needed to be repotted, so it dried out fast, and then it wound up in a spot next to a heater in the plant room, which dried it out faster. Do this enough times, and you wind up having to replace them. 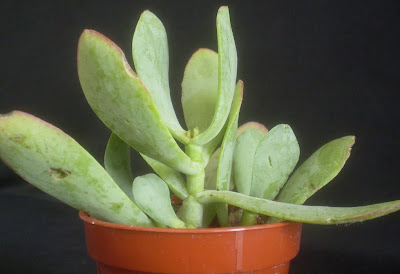 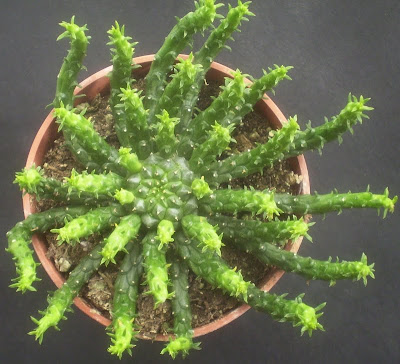 Euphorbia flanaganii.
Because how could I not? Just look at it, will you. 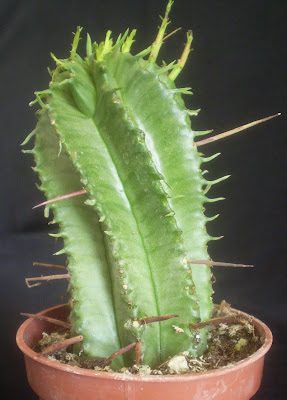 Euphorbia horrida var. noorsveldensis.
I'd wanted to get one of these last summer from Lowe's, but the one they had also came with aphids, and I didn't especially want the aphids. I waited for several months for Lowe's to notice the aphids and do something about them, but they did not. So this one, I figured I should buy before the inevitable Lowe's deterioration. Alas, it's doing the least well of the new arrivals, possibly because it got jostled half to death as we brought it back home. 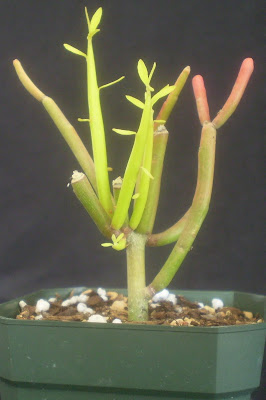 Euphorbia tirucalli 'Firesticks.'
This came from the ex-job, and I would have preferred to leave it there for a little longer, to let it get a bit bigger and grow roots into the rest of the pot before buying one. (They came in as plugs around the end of January, I think? And then were immediately repotted into three-inch pots. So there's soil in there that doesn't have roots growing through it yet.) But they'd already sold most of the six or seven they'd gotten, and I didn't want to miss the chance to get one. So I bought it earlier than I would have liked. So far, so good, though. And I've had very good luck with Euphorbia tirucalli historically, so this will probably be fine. 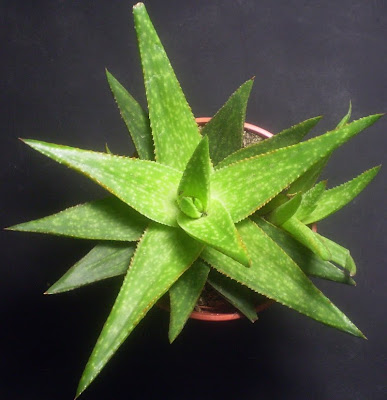 Gasteraloe x 'Green Gold.'
Mostly for the novelty value of having an intergeneric plant that's not an orchid. Though it has a certain somethingness I like.

Well, that's probably the Aloeness, now that I think about it. 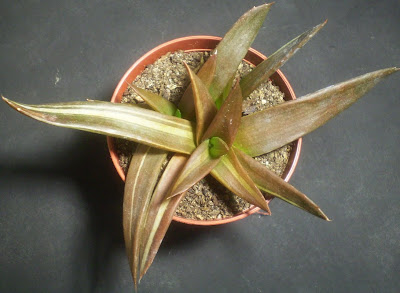 Aloe NOID?
The variegation made this too much to pass up, but the color (similar to Alworthia 'Black Gem,') was also interesting. Alas, the plant was plain green within a few days, but I could probably change it back if I really wanted to: the basement lights are bright enough to darken 'Black Gem.' I haven't looked for an ID yet.

Posted by mr_subjunctive at 6:57 AM

I quite like all the Euphorbia and Ardisia. That last Aloe is also really interesting. Thanks for the link!

You should've been at the Chicago Flower and Garden Show. Ted's greenhouse has the most awesome selection of succulents ever. When I was there I was thinking how much you'd like the plants.

I'm not incredibly jealous, since places around here have gotten in some new succulents too, but some of the pictures I've seen on other people's blogs have been really interesting.

Any time you add a new member to the family, schedules go out the window.

We can wait, no worries.

I just bought a succulent today that looks like a big purple flower. Haven't foind out what it is yet, but it's beautiful.

Fantastic acquisitions, Mr. S.! 'Firesticks' really blew me away. I've been a cactus and succulent fanatic since age nine, and of course, I want 'em all! (I do draw the line at those grafted fluorescent globules and anything with dried flowers stuck into it so it looks like it's blooming.)

Euphorbia flanaganii is one of my faves...always reminds me of an octopus. We just had a spurt of ants attack ours, but I caught it early and now it is back on track. thanks for the plant shares. Matti