Well. It looks like Sheba's name is going to stay Sheba. This is not because it did well in last week's poll (though it did, getting twice as many votes as the second-place "Anya") so much as inertia. We're used to calling her that, she doesn't respond incredibly consistently to it but she responds better to that than to anything else, and whether I like it or not, it seems like her name. The husband concurs.

So that's that. But next time, we won't let the shelter people name the dog for us. 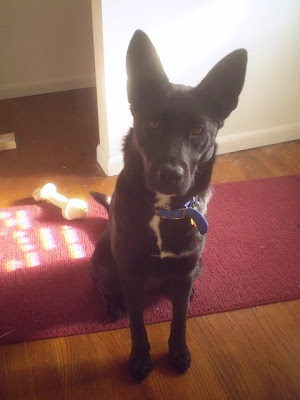 This past week, nothing huge happened with Sheba, though she wouldn't eat anything but grass from Tuesday night through Wednesday afternoon. She's not a huge fan of the dry food. Mix a tiny amount of canned food into the dry, though (like 1/4 of a can), and Sheba will eat them both alarmingly fast.

Also, on Friday, we took her with us on a short trip into Iowa City and she got carsick. Again. So now four pukings in sixteen days. Perhaps she has a quota or something. I don't mind so much, but if I'm going to go to the trouble of cooking for her (mixing counts!), I wish she could meet me halfway and at least try to digest what I prepare.

Nina, meanwhile, trucks along in that stoic reptilian way of hers. It's recently occurred to me to wonder how old she is. In lizard years, I mean. Even by the most extravagant estimates of her potential lifespan and the most optimistic guess of her current age, she's at least 13. More pessimistic guesses yield a human-equivalent age of about 40, minimum. 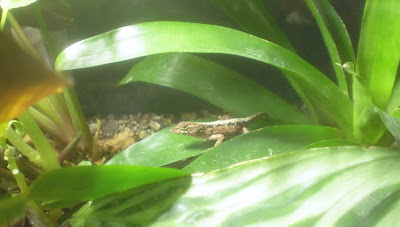 I'm not any good at guessing the ages of humans, so I'm not going to look at her and try to make a guess. But if you can guess anything about her maturity level from her facial expression, hey, go right ahead.

Sheba, of course, is in her mid- to late teens, at least going by the method that says to count 14 for the first year and then seven for every year thereafter. Which seems about right. I know sometimes she has to be thinking, Dad, you're embarrassing me in front of my friends.

When I brought my cat home from the pound he had "new home" diarrhea that turned into 3 weeks of hell diarrhea (so much so that I finally learned how to spell the dern word). We tried every type of food and medical tool to settle his stomach.

Then I simply switched his food to California Natural and he was fine. He's just sensitive to foods. Good luck with Sheba!

I think that food is often a matter of try and try again if it doesn't work. A lot of people I know have changed to the raw diet and are happy with it. As for the puking in the car, it was never a problem for me with any of my dogs but I do know people who swear by one of the aromatherapy treatments - nothing exotic but a drop of something or other (I think raspberry oil might be one) on the tongue before traveling. Or maybe she just needs to get less excited about riding and more blase. At least she isn't leaping through the windows (closed) as one of mine did when I "abandoned" him in the car for five minutes.

We used to have a dog with a sensitive stomach; usually she was fine but then for a run of a few days she'd get sick from time to time, or get carsick. We would give her pepcid (the chewable ones) at the first sign of trouble and then daily for the next 2-3 days and it really seemed to help. When she's in the car, make sure she has a lot of fresh air, even if it's cold out. And make sure all the surfaces around her are covered with washable blankets! And keep paper towels in the car (and poopie bags, spare leash, water bowl - the dog emergency kit).

As for food, don't start spoiling her with bits of canned food unless you want to keep "cooking" for her forever! I agree that experimenting with other dry foods until you find one she likes is best. We use Nutro's Natural Choice; comes in a lot of varieties, chicken-based, lamb-based, etc. Our dogs gobble the large-breed formula like it's M&Ms in gravy.

I fear you've opened a true floodgate of unsolicited advice here, Mr. S., and am only too happy to contribute to the effluvium. My goldens ate everything that didn't move faster than they did, but Shiloh is shockingly fastidious. I give her dry food, and she embraces each new brand, from the most exclusive conceivable down to IAMS, as though it were manna from heaven. For two to three days. Then it's "Ho hum, I'm really not hungry," while we die of anxiety. I've found that spreading a couple of teaspoons of cottage cheese on top of the food gets her out of her lethargy and into at least 2/3 of her food pretty fast, though. And she simply loves a tablespoon or two of plain yogurt, which is good for her digestion, as well as a raw egg cracked over whole-wheat bread, not to mention pretty much every fruit and vegetable known to humankind (even undressed lettuce) and, of course, cheese. So we struggle on with the food but try to supplement with a lot of healthy add-ons (including her glucosamine-rich sour cherry treats and her beloved sweet potato treats) and she seems to be thriving. Good luck with Sheba!

Nina reminds me of Nefertiti: Eternal at every age. Talk about flourishing! I hope you have her for many years to come.

I'll forgo the unsolicited advice and just say that Nina and Sheba both look adorable! ;)

Sheba is adorable! Sorry about the puking. It could just be anxiety (if you weren't used to riding in a car, it might be terrifying!). There's a product called Bach's Rescue Remedy, and it's specifically for stressed out animals. You put a drop or two on Sheba's tongue and see if that doesn't relax her before car trips. It's something to try, anyway.

Because she's so cute, I won't call her rude for refusing to digest your hard cooking.

I think your creatures are both fabulous! I've had many different reptiles over the years (green iguanas, anoles, tokay geckos, crested geckos, etc.) and their life spans seem to vary widely (helpful, eh? :) but all you can do with any of them is just enjoy and see what happens. My dog experience is lifelong, but never had one that wouldn't eat. Carsick-we just tried like hell not to take them anywhere (helpful again :)

Eating all that grass is a dog's way of trying to clean out her system. If you haven't already you may want to worm her.

As for food, I'm a raw feeder. My dog refused most dog food or was sick on it so I just switched to animal chunks. Granted, she's so small (and your girl looks to be fairly large) this is a pretty inexpensive way to feed healthy for me but it is also one I'd use on a big dog.

If you don't want to do this do read the dog food analysis website @ http://www.dogfoodanalysis.com/