I enjoyed having some time off from the blog, though the time was not necessarily wonderful. We still don't have, as of Thursday morning, a consistent internet connection, though the husband did finally convince Iowa Telcom to agree to send a technician out to look at the situation, after three weeks of calling them about it. When are they sending him/r? We do not know. Will s/he let us know s/he's coming? Maybe. Apparently it's all contingent on whatever his/r other assignments are, which makes me think that perhaps Iowa Telcom only employs one technician for all their thousands (?) of customers. (This could explain why they were so reluctant to send one.)

Also, on Wednesday, we had a Tornado Warning, which used to mean that an actual tornado was spotted somewhere in the vicinity by a responsible and mostly sober adult, but now they'll issue Warnings if the echo from the Doppler radar looks a certain way. This is probably a good thing, in that they can get people's attention and give them more time to get to shelter, but it also leads to a lot of false positives that will sooner or later cause people not to take the Warnings seriously. I suspect this was a false positive. We did get a little bit of pea-sized hail, though. I like storms, though I would have enjoyed this more had the husband been home for it, though. (He was in Iowa City.)

Sheba had never been downstairs before, and didn't want to go, so I had to carry her down. I got the impression that she was disappointed with the basement, that she'd imagined something much cooler. Perhaps I'm projecting.

So nothing especially "severe" happened. The lower spots in the back yard are now under about three inches of standing water, but that's been true for days. It's so wet our grass is growing fungus. 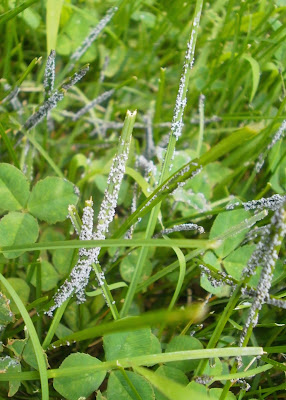 Meanwhile, I took up painting: 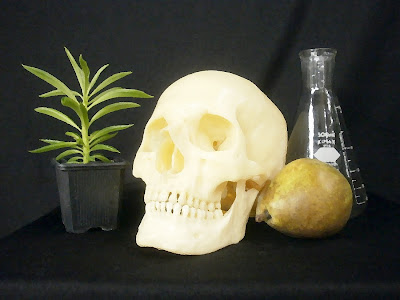 View full-size if you want to see the brushwork. UPDATE: Is not really a painting. My graphics program, Irfanview, has an "Oil Paint" effect setting. I thought it would be more obvious that the image was a fake than was apparently the case. Apologies.
I don't know what brought this on. It didn't make much sense at the time, either. I remember noticing that the Peperomia had new growth on it (it was just a cutting three months ago), and that some of the leaves were bigger than the leaves on the parent plant . . . and then, it would appear, I blacked out, grabbed a few random items, and took some pictures.

The skull is plastic. I have an aunt who worked (briefly) for a place that made plastic model skeletons, and the skull was the "wrong" color. She thought I might want it, so I've had it for about fifteen years. We do not have actual human skulls laying around the house. That I know of.

Fun post to read even if the reason behind your hiatus is not. You sound pretty calm about it though...
fungus on grass..oh my!
And, hey! cool painting~realistic, even if the skull is yellow tinged ;)
Lynn

I actually have several photos like this, and one painting, although I never finished it. But my skulls are resin, plastic, and museum cast replica plaster.

Nice painting. So you're a talented, witty writer, have a scientifc mind, and have artistic talent as well. What other gifts are you hiding?

We also have a plastic skull around the house. (I see a trend building here.) My husband bought a model kit to build because a) he likes building models and b) he thought it would be useful for his paintings.

It didn't get finished, though, until my stepson needed a skull for a high school play.

I think your aunt should do a guest blog and tell some stories from the skull factory.

Very nice painting! I really had to look to see if it really was a painting. SO realistic. I don't mind all the rain but,lone tree has been known to have had a few tornados. Not a good thing.

Heh. And there I thought I was strange for having rabbit skulls lying around - those are real, though (or were, I think I threw them out when we moved) - found in the compost heap. I kept them in a heart-shaped box with flowers on it.