This poor little Cereus peruvianus. I don't know what its story was originally; all I know is that it had been cut back at some point before I started working in the garden center (August 2007). I've never seen the plant fully intact; I don't know how it came to be cut back, or how long ago.

Still, though, I'd seen advice to cut the tops off of plants as a way to propagate them, or when they get too tall, or as a way to salvage a plant with fungal or disease problems, usually with the assurance that the plant would sprout new growing tips and recover. So I figured it was only a matter of time, and waited.

The whole time I worked there, the plant did nothing at all. August 2008 came and went, then I left in May 2009, and the plant was still there, looking exactly the same. The first indication that something might be going on was in September 2009, when it looked like the plant finally intended to sprout some new growing tips, but they turned out to be flower buds: 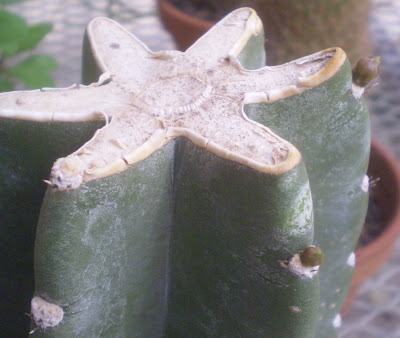 And, of course, once there were flower buds, someone was interested in buying the plant, so they took it into the back room to hold for the customer, and the customer never came to get it. Or maybe the customer had a change of mind. I'm not sure. In any case, the plant went to all that trouble to produce flower buds, and then it got moved to a dark spot, dropped the buds, and of course the customer didn't take it, after that.

Being a cactus is, I suspect, often kind of frustrating. Hence the acting out.

But so anyway. Back out to the sales floor it went, and it sat there for almost a year after the flower-bud thing before it elected to do something else. 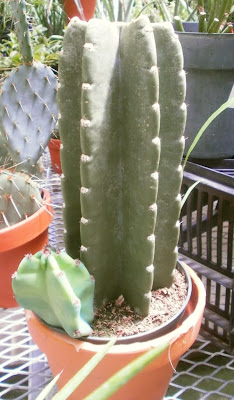 So now it's got a growing tip again, finally, some three or more years after losing the original, and it looks like it's working pretty hard to make up for lost time. Will this make someone want to buy it again?

Just being nosey, but why don't you buy it? The new growth makes it look like it has a goiter and I don't think it's going to sell that way. Poor little thing.

Spend $25 for a plant I already have eight of at home, that doesn't even look that great? Pluck only gets you so far, buddy.

Besides which, I think the place has pretty well demonstrated that they're willing to keep even the misfits around until somebody wants to buy them. S/He'll be fine.

Funny, I have photos I was planning on sharing in the next few days of the same type of cactus, but mine is growing crazy fast. Maybe mine has a stronger will to live, or an agenda of some sort.

The stumps are interesting. I have the "mother" of all of this style cactus and it gets huge!! So every year, I break a couple off and plant them in various places....some take off right away while others will take awhile...and a tiny few may die, but have no fear, in about 1-2 years you will see some progress...and then they start taking off. I have a similiar situation in a pot on my window....and only this year, after 2 years, did it start growing. It's a beautiful plant and one of my favorites in the desert.

Mine were very fast growers when I first got them (IIRC, they tripled in height in either one or two years, from 17" to 51"), but have slowed down since then. Their huge size means that I don't have many options for where to put them, and so they wind up in lower light than they want, so they don't grow as fast, which all works out fine.

But then, I've never cut the tops off of them either, so I don't know what kind of setback that would have been.

I wonder if someone was going to use the cereus as the bottom of a graft and put another cactus on top if it. It is cut that way. It might have been faster to show the new shoot if the pot was bigger. It needs more room to spread out than the pot it is in, if you ask me ... which no one did!

I would certainly want to buy it! The new growth looks pretty vigorous!

I would second that the pot looks really small. Maybe that put the cactus in some sort of dormancy. Some desert plants have deep / spreading roots to collect humidity way below the surface.

Probably largerpot, new soil and more watering now that is hot would make it grow way faster. I wonder if it has been underwatered in the hot season. I am growing Opuntias from seeds of Prickly Pears I are and the germinated quickly and they grow fast in teh summer. I coupped by mistake the top of one and it quickly grew some new growth

Aw, poor little guy! He looks stocky and cute! I do hope he finds a good home.