Wow. That was fast. It seems like just yesterday I was noticing the seed pods for the first time.

Of course, I wasn't really looking for them until recently, so by the time I noticed, they probably were pretty far along in the process already. Since then, the 'Bella Vanilla' and 'Bella Red' have also flowered, and I've been crossing flowers left and right, which means there will be lots more seeds in the near future. (At the moment, the 'Bella Pink' has six developing seed pods on it, mostly 'Bella Pink' x 'Bella Red' crosses, because 'Bella Red' flowered first.) 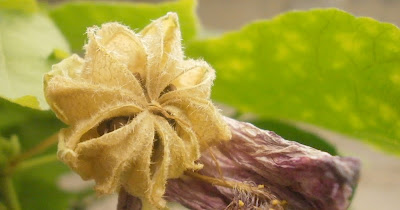 Once the seeds are ready to go, the seed pod splits open; you can see the seeds through the gaps. I put a sandwich bag over the branch containing the pod and tied it very loosely with a twist-tie. (Like, very loosely. I pretty much just folded it in half like a hairpin: I didn't even close the loop, for fear of damaging the stem. The sandwich bag just needed to be there; it didn't need to withstand hurricane-force winds or anything, so just barely folding it was enough.) 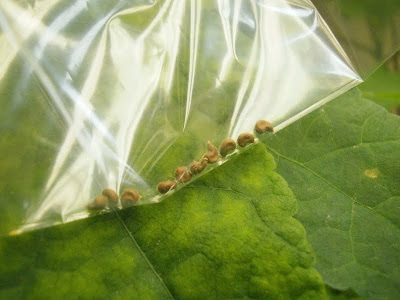 Not too long after the pod began to split, the seeds started to fall out, and then I sort of flicked the pod through the bag until the rest of them fell out. I wound up with forty seeds from the one pod -- 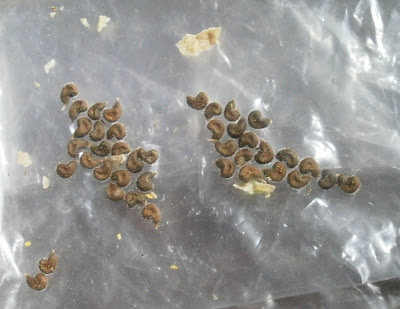 -- though somehow when I planted them in a plug tray, I wound up with a count of 41, so either I missed a hole in the tray or there's one seed that didn't make it into the above picture.

I didn't know exactly what to do with the seeds, so I basically guessed. Wet down a bunch of soil, made holes of various depths, put the seed in, covered the seed up. It's in a bright but cool spot under some fluorescent lights in the basement, under a plastic dome. The seeds were very fresh, so if this doesn't work then I may have to give up on Abutilon propagation. I'll let you know.

On the other hand, if it works really well, and I get, say, 90% germination, then that leaves me with 36 more hungry mouths to feed, plus another couple hundred on the way once the other seed pods mature. If I really worked at it, I could have a thousand Abutilon plants by Christmas.

Not that that's the plan, or that it would be in any way a good idea. There are still whiteflies outside on the pineapple sage, tomatoes, and coleus, all but howling at the door to get inside (it's faint and very high-pitched, but it's howling), and if they were to succeed, it'd be beyond stupid to have a thousand Abutilons in here; I'd be fighting whitefly forever. So I don't know what my plans are for the Abutilon seeds, but I intend to accumulate a bunch of them anyway. Maybe they'll come in handy somehow.

I suspect you must have in mind something like: setting them out as bedding plants outside next spring after last frost, and when they come into flower seeing if you have any uniquely valuable new cultivars. That would entail clearing beds and improving the soil this fall or early next spring.

Well, there is always trading, giveaways, or selling. Seeds are much easier to work with than plants in that regard. Little coin envelopes (or other small bags) for the seeds, padded envelopes for mailing, and that's it.

I don't know about putting them outside. If whiteflies are in the area every year to the extent they've been this year, that would be awfully pointless. Now that you've said this, though, and I have visions of stunning new cultivars dancing in my head . . . I don't know.

True. And if I produce seeds at the speed the plants appear to be capable of, I'll definitely have some to trade.

Shew, I'm glad you're not on hiatus yet!

This reminds me I've still got some seeds (bought ones - 'Bella', too, even!) lying around here. I keep meaning to sow them, but where? Where?
I've found Abutilons easy to get rid of - I had a bunch of cuttings this spring, and gave a lot of them away to friends and family. I took the rest to the flea market with a bunch of other plants and a few boxes of books, and the Abutilons were the first to be sold out. Definitely taking more cuttings for next spring!

The book Seed Germination Theory and Practice by Norman C. Deno published by him in 1993, says regarding A. theophrasti:"germ. 100% in 2 days at 70 degrees if an opening is ground through the seed coat. If the opening is not made, germination from 5 - 25% and takes place erratically over 1 - 10 weeks".
Do you know about this book?
Ed

Hadn't heard of the book before, no. I suppose that's believable, though -- if the A. theophrastis around here are allowed to develop to full height, they can produce tons of seed pods, on the order of 100/plant (rough estimate). If they need seed coat scarification to germinate, that might explain why Iowa isn't covered in velvetleaf. I mean, it's covered in velvetleaf, but there are a few patches of other stuff.

Of course, now you have me wondering if I should have rubbed the seeds over some sandpaper before planting them. I suppose I can always try that when the next batch ripens.