(Note: Whoops. Neglected to notice that I scheduled this post for PM, not AM, until I checked the blog this morning and found it wasn't there. Apologies.)

Took Sheba outside to play fetch with the tennis ball on Saturday morning, and this was sitting next to the garage, on the pavement: 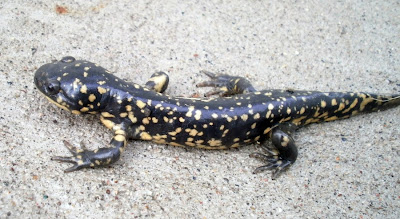 What ensued was probably funny, if you weren't me, as I then had to simultaneously keep Sheba from noticing/bothering the poor thing, while also going inside to get the camera, and then once I got the camera, I was trying to throw the ball for Sheba to keep her occupied while taking pictures, which would have worked better had the ball not gone under the fence. (The fence on one side of the back yard has a gap at the bottom, which seems to be growing, through which a lot of tennis balls have vanished.) So there was a lot of one-handed throwing and photographing and getting confused about which I was supposed to be doing at which moment.

Anyway. I knew it was a salamander of some kind, and I knew Iowa had salamanders in theory, but this was the first one I'd seen in years, possibly decades, and so I wasn't up on my Iowa salamander species at all. Research once I got inside leads me to the conclusion that it's most likely a tiger salamander, Ambystoma tigrinum. Most of the A. tigrinum photos I've found show a lot more yellow and a lot less black, but it's still the only Iowa native salamander of the right size and color, so it's as solid of an identification as I can come up with. 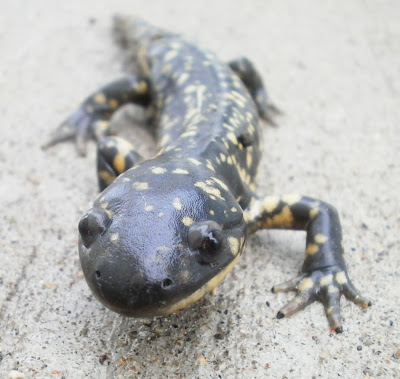 I got a dozen or so pictures and then left to get a replacement ball for Sheba, and when I came back out, the salamander was crawling towards the car. I didn't want it to go under the car, so I picked it up and put it back down under the pineapple sage plants, on the theory that this would be a fairly protected spot for it to dig itself a burrow and hibernate. Subsequent reading makes me think that it probably crawled back out and continued on in the same direction after I'd left, but oh well. I tried.

Picking it up was a weirdly familiar experience. When I was a kid, Mom and Dad bought me a Creepy Crawlers Bug Maker at some point, which was roughly the boy version of the Easy-Bake Oven: it came with a number of plastic molds, an "oven" that was heated by a lightbulb, and a bunch of different colors of liquid goop. One poured the goop into the mold, heated it in the oven for the prescribed amount of time, and then pulled out a harder, but still pretty wet and flexible, animal-shaped piece of plastic. I don't remember doing very much of this, but I do remember the way the things felt when they'd cooled off: very much like a tiger salamander. (Though the salamander didn't jiggle, as the Creepy Crawlers did.) Both are slightly sticky, like paint that's almost dried but not quite, and also cool to the touch. Not slimy or anything. It wasn't an unpleasant feeling. 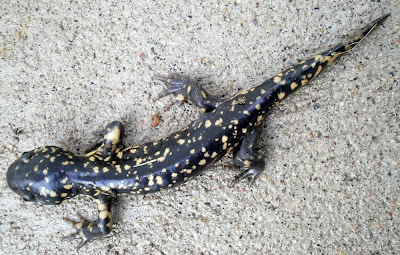 The weird thing is that I hadn't thought of Creepy Crawlers in many many years, but touching the salamander brought it all back immediately. I looked it up on-line in the course of writing this post, and Creepy Crawlers still exist, but according to the Amazon reviews there's no lightbulb included, and it uses a strange size and type (a 60W candelabra bulb or a 100W candelabra bulb, depending on the review); the oven is kind of cheaply made and tends to break; and the bugs smell bad while they cook. Plus they seem very expensive ($45), though that might be more a case of me not knowing what toys cost these days.

Tiger salamanders can apparently also be kept as pets, though I wonder how satisfying they could be, since the herpnet.net site linked above says they spend most of their time underground in burrows. (Nina may not be the world's most active and exciting pet, but at least when she moves around, she does it above ground where I can see her do it.) On the plus side, they can live to be 25 years old, which is impressive, and they can at least learn to the extent that they can get excited when they know they're about to be fed. I've had pets that gave me less.

I'm sort of especially happy to see a salamander here, because they apparently have very sensitive skin, and absorb chemicals through the skin easily. If we have salamanders here, then the environmental situation must not be too terrible. At least, not in our back yard specifically. This is encouraging. 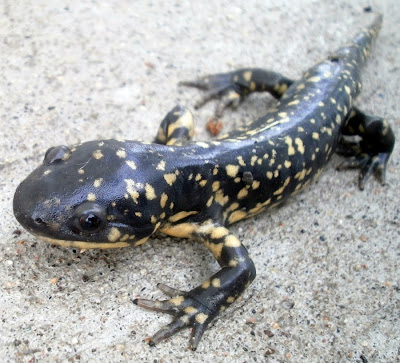 Very cute little critter. It's always fun to run across interesting creatures like this.

I had a Creepy Crawlers Bugmaker too. I don't know what sort of light mine took as I was pretty young at the time but I do remember it smelling pretty bad when they were baking!

Cool! I remember looking for newts and toads in the swampy areas where I grew up in Michigan. My best childhood memories always seem to involve small water-loving creatures!

Cool photos. I've never seen a salamander except for in zoo/aquarium displays.

My mother kept/keeps tiger salamanders as pets. They're in aquariums that she used to fill with about 2 inches of dirt, but now I believe she uses damp paper towels because the dirt grit kept getting in their eyes and then they'd be forever flapping their arms at their heads and not paying attention to crickets, etc. They did burrow to the extent that they could in that depth, but also frequently chose to just hang out in a bowl of water. One time one escaped and climbed down from its cage on a ledge, through two rooms, down a flight of carpeted stairs, and across the entire carpeted basement to my room where I found it hours later looking no worse for the wear except for some carpet fibers stuck to its head.

Great photos! How did you get so close? You must have steady hands and a good zoom on your camera.

Nina, and now Tigger. I am all for the inclusion of as many herps as possible in blogs. Nice find and great pictures!

I grew up in eastern Iowa (not that long ago) and spent an entire summer fishing these little guys out of window wells and trying to keep them as pets. At the age of 10 I wasn't very good at it, and we ended up releasing them into the "wild." Cute!