I'd hoped to have the Sansevieria cylindrica profile up today, but, alas, it was not to be, so now we're aiming for Tuesday. (UPDATE: Yup, it was posted Tuesday.)

Just to catch everybody up: I had a seed pod on my Abutilon 'Bella Pink' in September. Collected the seeds from it in late September and planted 41 of them in early October. The first seedling came up within I think two or three days. And this is where we've gotten with that so far: 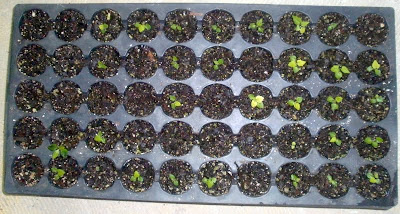 I count 29 seedlings (one of the two on the left is something else, not an Abutilon), which gives me a germination rate of about 71-73%. (I'm not sure which because I counted 40 seeds when I started planting, but had somehow managed to cover 41 cells in the tray when I was done, so it's likely that one of these never actually had a seed.) And that took about six weeks. It's still possible that more of them will sprout, but 29 seedlings is a respectable number, considering that the plants may or may not be worth growing: crosses between two different hybrids won't necessarily keep any of the desirable characteristics of the parents. At least we'll have the chance to meet the offspring, it looks like.

The seedlings haven't had any cultural problems so far; the seed coat for a few of them stayed on the developing leaves instead of falling off the plant and was attacked by fungus. The plants themselves were unhurt, though, and they weren't using the seed coat anymore anyway. Other than that, it looks like everything's working like it's supposed to.

Your seedlings look great!
I also have some seedlings trying to grow on my garden now.
I hope they grow nice and strong

Very nice! Do keep us posted on their progress.

Still can't get over how cute you are.

You've mentioned the white-fly problem as an obstacle to growing these outside. If you bed them out outside next summer (assuming you have the bed space), you could turn that to your advantage, and see this as an opportunity to look at the variation in white-fly susceptibility, and select for white-fly resistance. Of course, if you wanted to do that, it would help to use the widest possible variety of germ plasm, and grow seeds in greater numbers, and that could impinge on your other goals by placing yet more demands on your time, Still, it's something to be borne in mind: In plant breeding, any limitation on your ability to grow a plant is a selection opportunity.

True, I suppose. I assume the 'Bella' varieties all have shared ancestry to some degree or another, and I only have three varieties of them, so the actual amount of genetic variation I'm working with might be really small. (There's always Abutilon theophrasti, I suppose, if I wanted to add some new genes to the mix. Maybe I could unleash a new kind of ornamental velvetleaf upon the unsuspecting farmers of Iowa.) Maybe I should try to irradiate the seeds with something. Banana?[1] Smoke detector?[2]

[1] Bananas contain large amounts of potassium, which is naturally weakly radioactive due to the isotope K-40.
[2] Smoke detectors use americium, an element not found naturally on earth, to continuously ionize the air in a small chamber between two electrodes. The ionized air permits a steady flow of current between them. If smoke particles get into the chamber, they absorb the radiation from the americium and the air molecules aren't ionized, leading to a change in the current, which triggers the alarm.