I stuck a bunch of Salvia elegans cuttings in a plug tray last Wednesday. Being pretty much out of room in the house, I stuck the tray in the best available spot I could find, on a very low shelf in the southwest corner of the plant room, then went on to dealing with the other thing I wanted to put in the plug tray, Canna seeds. (Which have been soaking in water for a couple days now, and aren't showing any roots yet; I suspect I may have overdone the filing-down-the-seed-coat step.)

Thursday morning, I went to take Sheba out, and saw this on the floor in front of the door: 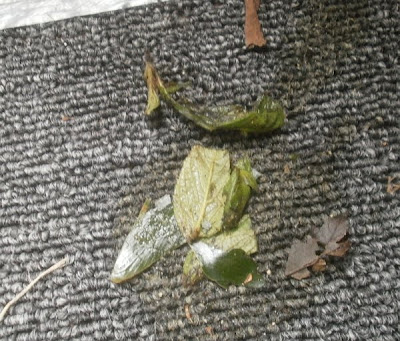 I'm only out three cuttings, of about 22, so this is no big deal unless it happens again, and at least it wasn't something poisonous. But still. Frustrating. 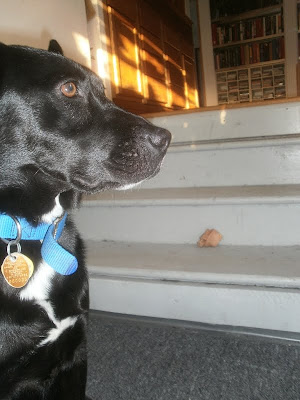 She's also eaten a chocolate chip muffin this week, last Sunday, which was somewhat alarming until I found this site and did some math. No problems related to the muffin as far as I'm aware, but I was prepared for diarrhea and/or vomiting, at the very least. But no, she saves the vomiting for three days later.

Which makes me wonder when she's planning the diarrhea. It's really not the sort of thing you want taking you by surprise.

The diarrhea strikes at the worst possible moment. At 3 am, when you have something very important that day and you would need all the sleep you can get. Also the place is the worst possible. Some place, that you can't reach or find. Or then you find the place when you get out of bed... Both, if possible.

On the diarrhea - if she's going to have a reaction, it'll be within hours of the ingestion.

Once you've made it past 12 hours, you should be okay. (as always, mileage may vary, but dogs metabolisms run quick...)

Someone in my neighbourhood has a dog that looks a lot like Sheba - it's really unsettling when I see them on their evening walk, because my mind always goes, 'oh look, it's Sheba!' and I have to remind myself we're not even on the same continent!

Oh, don't be mad at Sheba about the plants. She was just trying to help you have less to care for.