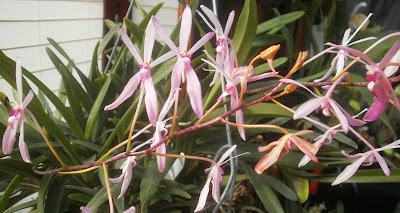 I guess it's supposed to look like this, but mostly I think, so what's the point of this, exactly?

Once again, the name on this plant was misspelled at the orchid show, so the file name on the photo is incorrect. Which will probably never matter to anyone, of course.

Renanetia, which I'd never heard of before, is an intergeneric cross between Neofinetia and Renanthera. Which I'd likewise never heard of before. Most of the pictures that show up when one googles Renanetia show flowers which are varying shades of red or orange. (Google resists at first, and tries to show you pictures for "Renania" instead, which appears to be the Italian name for the Rhineland, in Germany. No, dear Google, one has to say, believe it or not, I actually meant to search for the word I typed in, so please show me what I asked you to find, okay?) So it's possible that Sunshine is an unusual cross in having pinkish flowers instead. I don't know.

Ah, intergeneric crosses. Only in orchids, and while the result may be pretty, in terms of the biology of flowers, a hopeful monster of limited interest.

Beautiful plant! Darn you for showing me another orchid I just HAVE to buy...

You are correct that the flower color is rather unusual. Renanthera are typically a screaming/eye-searing fireengine red, though there are few yellows. So pink is different.

The hybridizer may have, among other things, been looking to reduce the size of the plant. Renantheras are big plants. Neofinetias are small growers. In addition, Neos are pleasantly fragrant whereas Rens have no fragrance.

I wonder what would happen if that were crossed with a Vanda coerulea?

I don't think the US is the target audience for this one. We get the leftovers that aren't good enough to sell in Japan.

Neofinetias are native Japanese orchids. They have been cultivated there for ages and there are any number of cultivars including variegated ones. I think the purpose of this cross is to introduce pink as a novelty color to the Japanese neofinetia world.