Sheba was limping a little bit early in the week, and then again on Tuesday or Wednesday, but neither the husband or I could see anything wrong with her foot -- there were no cuts or puncture marks or anything. So it could have been a joint issue, rather than a foot issue. We may never know, because she'd stopped doing it by Thursday.

Other than that, nothing big going on with Nina or Sheba. 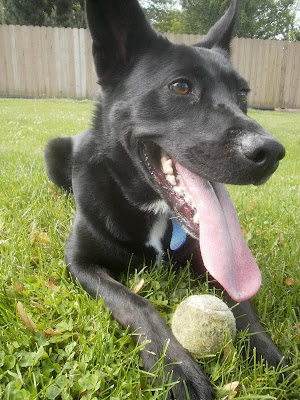 I checked on the barn swallows about a week ago -- I've been trying hard not to disturb them, so this is only the third time I've so much as looked in the nest. The parents were kind of freaked out anyway. They flew around me for a little while before settling on a power line and watching intently: 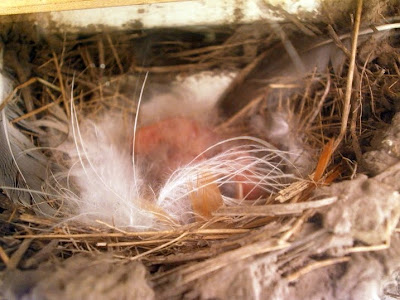 I know the nest is still being used, though, because when I sit on the couch in the living room, I can see the parents occasionally flying in and out, particularly around 6-7 PM.

Finally, if you didn't know already, the New York Senate voted late last night to approve gay marriage for New York. The other chamber of the NY legislature had already voted on this and passed it, and the governor signed it immediately after, so it's a done deal. The Empire State Building was lit up in rainbow colors last night, to mark the occasion: 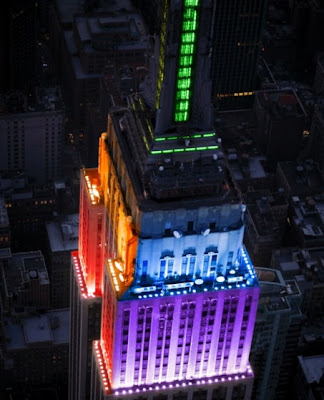 Empire State Building lit up in rainbow colors last night. Photo from Twitter User @ComfortablySmug. (Link to original version.)
This more than doubles the number of Americans who live in a state with gay marriage. (NY - 19.4 million; MA + IA + CT + VT + NH + DC combined - 15.7 million) It's still only 11% of the U.S. population, but progress is progress.

I am so happy about gay marriage being allowed!!
I hope when I am older I can get married in my own state! :D

Glad Sheba's foot is better, and very glad that another state is allowing gay marriage. :)