I've gotten a few fruits on the Murraya paniculata over the time I've had it. Generally they hang around for a few weeks and then drop off, and we find them on the floor somewhere and pick them up and throw them away.1 I've tried, in the past, to take out the seed and plant it, but after a few months of waiting for something to happen, I conclude that the seed was obviously no good, and throw it out, 'cause that's usually a safe assumption when you have a stemless, leafless plant that hasn't done anything for months. 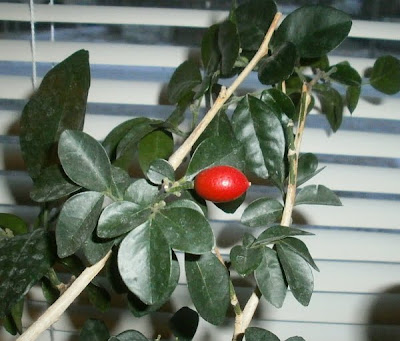 What a Murraya paniculata fruit looks like.
But! I forgot about one of them. It was in a flat of fairly overgrown other things (Ledebouria socialis, Hoya carnosa), and got covered by leaves such that I didn't realize that there was a pot still there. So on Monday I caught a glimpse of something amid all the leaves, and investigated, and found this: 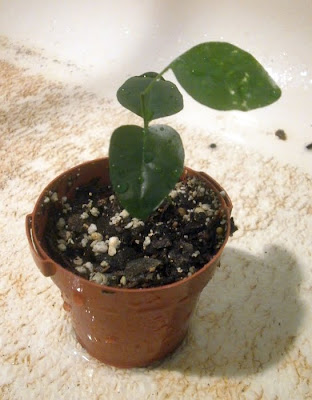 Which I know doesn't look much like a Murraya just yet, but I'm about 95% certain that's what it is. I didn't write down when I started the seed, and I sort of wish now that I had, because I'm curious about how long it actually took.

1. Murraya paniculata really is self-fertile (something I've been wondering about for ages).
2. My Murraya-propagating capacity is significantly larger than I had been assuming it was. (Cuttings have worked, but: so far I've had one definite success, one definite failure, and one that is still pending. Also I can only take so many cuttings before the parent plant starts to object, which is limiting.) This is exciting, since we basically can't get them in Iowa anymore.2

So anyway. I have a feeling I'm going to be starting more seeds very soon. My main plant has at least a couple fruits right now, and there were others forming last time I checked.3 My plant only seems to produce significant numbers of fruit a couple times a year, even though it blooms every few weeks like clockwork. It's been like that the whole five years it's lived here.

This time around, when I start the seeds, I'll make a note of the date.

-
1 Though now with Sheba here, we're trying to be a bit more alert about that. I don't know if the fruits are toxic to dogs, but they are apparently not to humans.
2 The main supply of Murraya in the U.S. is in Florida, and is currently quarantined so as to avoid spreading citrus greening disease to other states. Although Murraya isn't a citrus, it's in the same family (Rutaceae) and can also carry the disease, so its transport is restricted too. Presumably California Murrayas would still be okay to ship, but California seems not to have much of a tropical plant industry even though it seems like they ought to. (Lack of water, maybe?)
3 Sometimes they appear to start developing, but then change their mind before getting very big. I'm not sure if this means I'm misinterpreting their intentions or if I'm doing something to discourage them.
Posted by mr_subjunctive at 3:00 AM

It's called mock orange in Hawaii (where I grew up in the 70s/80s - now in Southern Delaware) and grown as a hedge plant - fragrance can be a bit overwhelming. I read recently older plants were declining - house lot sizes are shrinking and guessing fewer folks want to mess with hedges. Glossy green leaves were used as a substitute in leis for maile (a fragrant vine.

It's always a great feeling when a forgotten seed begins to to sprout. I hope it does well for you, especially because it's such a lovely plant.

I never looked at Murraya paniculata much because it is plenty here, i didn't know its seeds are beautiful. It is easily rooted here as cuttings and made into hedges. And that seedling really looks like citrus.

That's a great surprise. Good for you and your experiments. Like Andrea said, it is a pretty common plant locally and used mostly for hedges. We have streets named after its local name (Kamuning), too.