So this story starts on 30 Aug 2011, in Cedar Rapids. We were at Frontier, my favorite Cedar Rapids garden center, and I noticed that they had a bunch of new Zamioculcas zamiifolia 'Zamicro' plants in. Or possibly the cultivar was 'Mini:' I'm unclear whether those are the same plant under two different names or not. (There's a picture of 'Zamicro'/'Mini' from an earlier visit to Cedar Rapids here, if you're interested.)

Anyway. So the table in there was littered with a bunch of dropped leaflets from these plants, and I picked some up and asked the guy if he minded if I took some home, since they'd already fallen off and everything. And he said, essentially, knock yourself out. So then I felt obligated to buy something, and wound up getting a Sansevieria trifasciata 'Black Gold,'1 and took the leaflets home with me, and then realized: I don't even really like Zamioculcas. And 'Zamicro'/'Mini' is less attractive to me than the species, so I had no compelling reason to bring the leaflets home in the first place and what the hell had I been thinking.

But, you know how it is. When there is propagatable plant material, I will try to propagate it. It's my nature.

So it is with mixed emotions that I announce that those leaflets, after a year of cultivation, have begun to produce new growth: 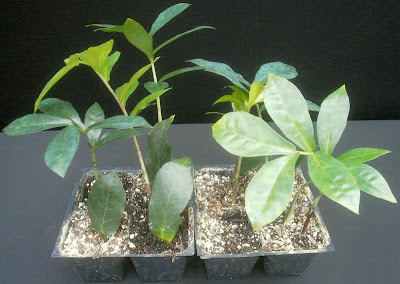 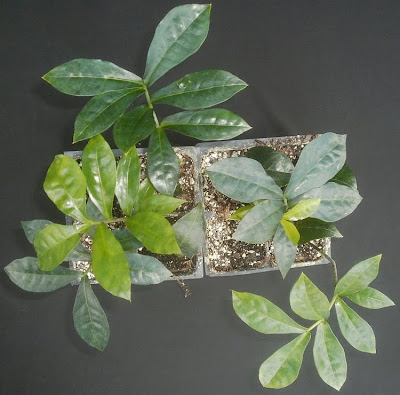 (Top-down view.)
Given that there's a year invested in these already, I see no reason not to keep going. Best-case scenario would be that they turn out to be much easier to grow than the species,2 in which case I will have to like them on principle, even if I don't like the look as well.


1 Which was doing unusually well for a S. trifasciata in my care until a couple months ago: the husband redid some shelves in the living room, so the plant wound up in a new location. Which it is most unhappy about. Really I should just learn the lesson already and stop trying to grow them, but that's a whole other story.
2 In my experience, Z. zamiifolia is easy to keep alive, but it's next to impossible to take a plant that looks bad and turn it into one that looks good. While it's true that they are very slow to drop leaves, they're also very slow to replace them. My longest-lived plant has about the same number of leaves now that it had six years ago when I got it. They may be a completely different set of leaves, but the plant didn't look good then, and it still doesn't look good now.
Posted by mr_subjunctive at 3:00 AM

one year to get to that point? oh man, I have 4 single leaves propagating, and seperately i have 2 stems with 4 or 5 leaves of the ZZ plant stuck in soil. All have sent out roots, and every week i check for new growth, I dont know if I have the patience to wait a whole year :(

I don't think it's ever taken me less than 9 months to go from leaflet to new growth. They are not fast plants.

I've never gotten excited about ZZ plants (except for the nickname). But Sansevieria? You have problems with Sansevieria? All they need is good strong light and... oh, yeah. That's in short supply in your house isn't it? If you are done with the Black Gold I might be able to squeeze one more plant onto my strong light shelf (ha! ha!)...

The 'Black Gold' actually still has good light (possibly even better light than it started out with); I don't know what it's problem is. The main difference is that it went from a spot near the ceiling to a spot only a few inches above the floor. Apparently there was a significant temperature difference, because it used to dry out a lot faster, and now it's rotting.

I do best with the bird's-nest types of Sansevierias; all the others do okay for a period of time and then start to rot. They don't usually die entirely, but I lose enough of the leaves that it never looks as good as it did when I got it. Why the bird's-nest types are the exception to this, I have no idea.

LOL - "When there is propagatable plant material, I will try to propagate it. It's my nature."

I LOVE it! I'm exactly the same way! I've noticed that the ZZ plant is a very slow grower. I've never tried propagating it from leaf cuttings before. It kills me when I see a huge pot about to bust open with a ZZ plant in it. I often wonder how old that plant must be.

Well if they do well for you, you may be able to sell them off.