I've just become acquainted with gizoogle.net, a site which Snoop-Doggifies Google results and/or websites. What is Snoop-Doggification? Er. It's probably easiest to just show you.

Unfortunately, a lot of the formatting gets lost in the process, so the resulting blog doesn't look much like PATSP, but I was especially tickled to see what it did to the list of houseplant books from the first Missing From Retail list:


I would absolutely buy a book about cribplants. 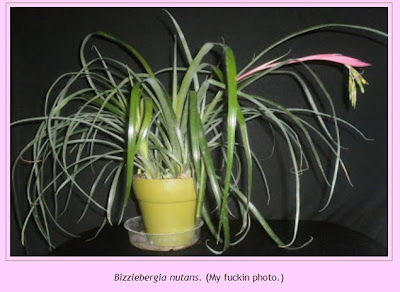 I would also totally buy a plant named Bizzlebergia nutans, especially if I saw it described like this:

Bizzlebergia nutans (biatchz tears) be a pimped out plant, as far as I be concerned -- it grows fast, propagates easily, is hard as fuck ta kill, n' produces short-lived but straight-up horny-ass flowers up in tha late fall n' winter.

Also Gizoogle is quite a bit more honest than I am when it comes to the Musa photo from this post. My original:

I don't give a fuck what tha fuck specific botanical characteristics distinguish Musa from Ensete.1

Mixed feelings about this overall. On the one hand, I was extremely entertained for a couple hours on Monday night, but then I felt bad, because the Snoop-Doggified2 versions were so much better than my original writing. But I got better. How did I get over this? By running other people's blogs through Gizoogle, and seeing how much improved everybody else was too.

As you might imagine, new layers of meaning would be added to any post where Carol talks about her hoe collection at May Dreams Gardens, but I prefer the garden fairy posts. (The most recent one emerges from Gizoogle signed by "Violet Chronicpea Maydreams," who is the "chizzle scribe fo' tha garden fairies n' tha garden fairy whoz ass likes ta put rocks along tha edgez of tha raised bedz up in tha Vegetable Garden Cathedral.") And I find the garden bloggers' bloom day inspirational quote much improved as well:

Our thugged-out asses can have flowers nearly every last muthafuckin month of tha year.
~ Elizabeth Lawrence

Moving on, here's Garden Rant, on the topic of which Presidents have had the best record on environmental protection issues: 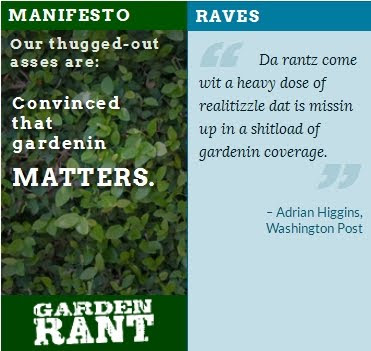 (Oh, word, Adrian?)
And I love Kylee's (Our Little Acre) account of finding a monarch caterpillar in her garden in November, mostly because I am amused by the milkweed --> milkchronic substitution:

But da most thugged-out astonishin muthafuckin thang I found was a monarch caterpillar fo' realz. A tiny one. It was so small, itz a wonder I even noticed dat shit. Da milkchronic it was on was mostly yellow n' dyin yo, but did sheezy some fresh freshly smoked up growth all up in tha top. Right back up in yo muthafuckin ass. Still, tha cold temperatures n' latenizz of tha season have caused most of tha milkchronic ta lose they leaves n' they're left as bare stems standin sentinel up in tha garden.

By now I'm pretty sure you get it, and since it was kinda stupid in the first place, I'll stop providing examples. Investigate further on your own, if you're interested.

DISCLAIMER:
OBVIOUSLY, none of the people who were "quoted" for this post said anything like what Gizoogle claims they said, however amusing I find the idea that they might start. I didn't ask permission first, because I'm not clear where the line actually is here -- I'm not reproducing text from other blogs, and the whole point of the humor is the obviousness that the people "quoted" would never, ever say any of these things, so it's hard for me to imagine a scenario in which the original authors would suffer any kind of material or emotional loss. But, if you are Carol, Susan, or Kylee, and you're offended by this anyway, for whatever reason, just leave me a comment or send an e-mail and I'll take it down and replace your bit with something from Fairegarden. (And if Frances is offended, I'll keep moving on until I find three bloggers who aren't. There is no shortage of bloggers.) And I'm sorry I didn't ask first; I expected you either wouldn't care or would be amused.
FURTHERMORE, no offense was intended toward PATSP readers. (Though y'all, at least, have been warned about the language, so I'm not going to take it very seriously if you claim to have been offended.)
ADDITIONALLY, Mr. Subjunctive does not, ordinarily, condone the use of the word "bitches" or any of its derivatives in reference to female humans,4 but there's a world of difference between "make me a sandwich, you dumb bitch" and "What up, my biyatch?", and I think this is clearly much, much closer to the latter. Though I can apologize for that too, if it'd make anybody feel better.
Peace out.


1 This is not true in the very strictest sense. I care, but only to the degree that it makes it easier for me to tell which I'm looking at. If the distinctions are all in how the flowers are arranged or the shape of the cell walls or something that's not obvious to the eye, then no, I really can't care.
2 I am aware that he is trying to change his name to "Snoop Lion." Dat don't even make no mothafuckin sense though, so I ain't even hearin it.
3 (It's the "4.6 mazillion acrez of preservation" part that does it for me.)
4 (and he's even a little uncomfortable using it for female dogs, as far as that goes)
Posted by mr_subjunctive at 3:00 AM

Labels: elsewhere on the web, Gizoogle, other, Snoop Dogg

Hilarious! Maybe the answer to your what-to-write-for-money dilemma is to run all your plant profiles through gizoogle and then publish them that way.

On a more serious note, I think this would be considered parody, so you're okay legally, at least.

Having encountered most of this slang through Jesse Pinkman in Breaking Bad I believe "biyotch" is now a gender-neutral term.

I seem to remember Snoopy has shown an interest in gardening, even meeting up with a British (Welsh) prize-winning vegetable grower.

That's just hilarious & great! Need to share this. Thank you, yo.

I almost died of laughter reading this. I seriously want to make "cribplants" a thing now.

Oh my god I love this so so so much.

LMFAO. That was just what I needed - a good laugh.

I don't know why, but I find this hilarious too! I mean laugh-out-loud-while-I'm-supposed-to-be-working funny!

Maybe it's because I'm a white chick married to an African American man who doesn't even know what a Shorty is. So other than in da club, and on Satellite radio and movies, I never get a chance to hear (or read) this beautiful dialect!

Of course, way way back when I was in school, this would not have fazed me, and I would have said, "and...?"

I appeciate your sense of humor. You make gardening a lot more fun than if it was just little old ladies talking about it.

Well, thanks, but don't go knocking little old ladies. Some of them are awfully funny too.