This was tagged "Onc. sulcatum," a species unknown to Google. I can't imagine anybody who knows anything about orchids looking at this and thinking that it's an Oncidium, so it's probably a case of whoever was making the labels being distracted. Which is fine. Happens to all of us. But this is why one proofreads, no? 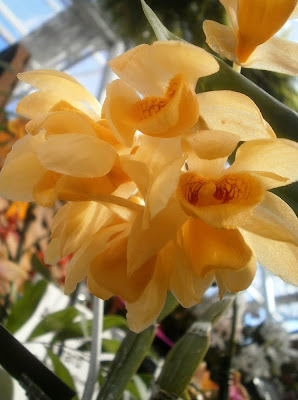 I'm not thrilled with this picture, but the way the flowers hung down made it difficult for me to get a better one (this is the best shot of 4). Oh, well.

And of course we have a Scalepocalypse 2012 update:

Rough week in the fight against scale. The Ardisia is the one I grew from the seeds of the original plant; the Phlebodium had been looking exceptionally impressive in the last few weeks, and I was feeling quite pleased with it. So naturally it should get scale so bad that several of the fronds would need to be cut off. 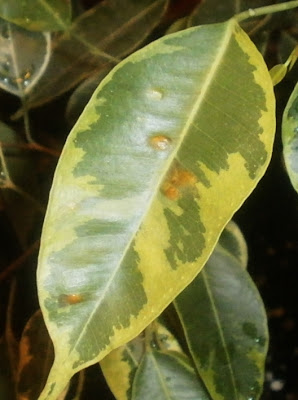 -- but it turned out to be something else. The bumps don't break when squished, they're present on both sides of the leaf, 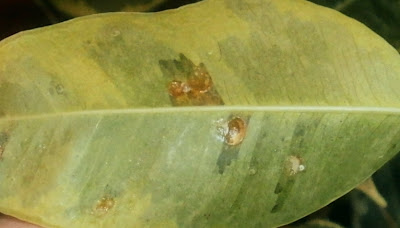 and there's reason to suspect edema. The plant has been doing very well for me in the last year or so, well enough that I'd repotted it in August. Because it's now in a larger pot, it's staying wet longer, and because it's on a table next to the south window in the living room, it tends to be a bit on the cold side. The most reliable way to cause edema in susceptible species is to leave them simultaneously cold and wet, and that's what I think I've done. (Similar things have appeared on a few other plants in the house: Yucca guatemalensis, Billbergia nutans, Pachycereus marginatus.)

There's still the chance that it's something other than edema, but at this point I'm thrilled anytime something goes wrong that isn't scale.

We're being attacked by insects at the moment, presumably scales. They leave a sticky residue on the leaves and there's black mould. Pretty nasty...

I've put two plants in quarantine (Capsicum and Dipladenia) and am considering my options. Perhaps sulphur?

Re: Ficus benjamina: I have recently discovered a similar bump on one of the leaves on my own Ficus benjamina. I wouldn't think it's from a pest. Otherwise the plant is doing fine.

I doubt sulfur would do anything against scale. It's used more as a treatment for fungus.

Oh, I see. We've bought a non-toxic liquid in a vaporiser; it's a watery suspension(?) of fatty acids. Early tests appear to suggest that the bugs don't like it.