Got to sleep late on Sunday night, so I had a headache for most of the day yesterday, which had a predictable effect on my productivity and coherence of thought. So. Um. Here are Gasteria bicolor seedlings? 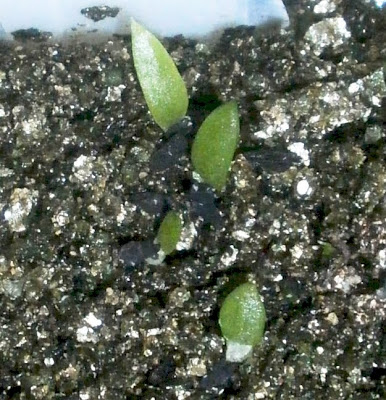 At this point, they're all just single leaves, the longest of which is about 0.3 in / 8 mm long. I'd intended to get a photo of the seeds also, but somehow failed to do so even though I'm pretty sure I took photos. I dunno. The seeds are interesting only in terms of how nondescript they are: matte black, shriveled, elongated things that you can perhaps barely make out in the photo. They didn't look promising at all, but there you go.

It's possible that these are hybrids (the seeds were from the ex-job, and weren't pollinated on purpose); it'll be a while before we know. It's possible we'll never know, in fact: my record with Gasterias is that they always eventually fall apart on me, probably because I overwater.

As long as you're here anyway, here's what the Spathiphyllum seedlings look like at the moment: 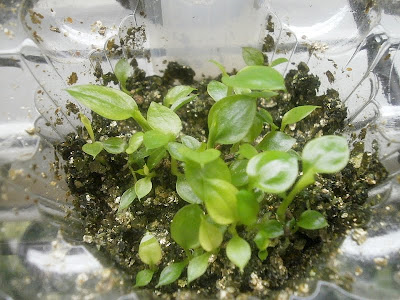 (The circle of vermiculite is roughly 2 in / 5 cm in diameter. This is not to be confused with the circle of life, which moves us all through despair and hope, through faith and life, 'til we find our place on the path unwinding.)
I'm not sure if I should pot them up individually; they seem crowded in the vermiculite, but the individual plants are still really tiny and probably wouldn't do well in a 3-inch pot. (Probably I'll wind up procrastinating on this for a while, and I'll pot them up when the weaker, smaller ones get crowded out and start dying off.)

It feels really odd to be worrying about Spathiphyllums like this. Gasterias too, actually, now that I think about it.

I know those are really young'uns, but they really look like Anthurium seedlings to me...