Okay! The process of propagating Coffea arabica by seed has officially begun. Not that I'm trying to germinate them now or anything. Judging by the information I've found on-line, this is going to be a fairly long (potentially eight months?!) process, and we've only just begun. But, we're at least officially underway now.

First, I cut the cherries off the plant. Got ten of them in all; nine had two seeds, and the tenth had one seed, plus a tiny stunted seed that I threw away because it was obviously not going anywhere, for a total of nineteen. 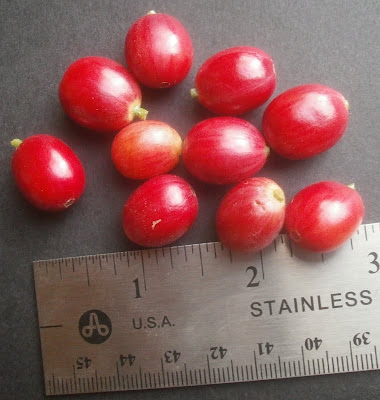 Then, I cut through the skin and peeled it off of the seeds. 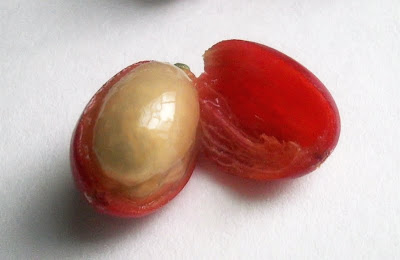 As I'd heard that coffee cherries were edible, I was excited to taste one for the first time. It was . . . disappointing. The husband and I agreed that the experience basically goes like this: first there's a brief initial mild pleasant sweetness that doesn't taste like anything in particular. Then there's a much stronger, longer-duration taste that strongly resembles a bell pepper, or bell pepper combined with freshly-mown grass. Then at the very end, there's a strong bitter aftertaste that doesn't last very long. The experience overall isn't terrible, but it didn't leave me with a strong desire to keep eating them, either. Schlumbergera fruits are better. (Though still not very good.)

The texture's also sort of a problem: the skin is tough (a little tougher than a cherry's skin: it might be closer to a plum), and just inside the skin there's a layer of stringy stuff that I can't think of a good comparison for. Then there's a clear thicker layer under that, with the approximate consistency of the interior of a grape. I don't know if you're supposed to eat that part too or not: I didn't try, because it was pretty firmly attached to the seed. 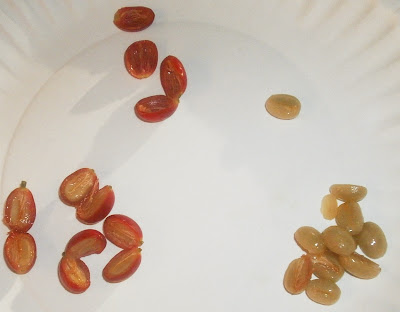 Top: skins without the seeds. Bottom left: fruits with seeds still inside. Bottom right: seeds separated from skins. The stunted not-quite-a-seed seed is at the top left of the pile of seeds.
The next step involved soaking them in water for two days. The grape-like stuff either partly dissolved in the water, or the seed inside expanded, because the layer got thinner. It didn't disappear entirely, though I think it was supposed to? 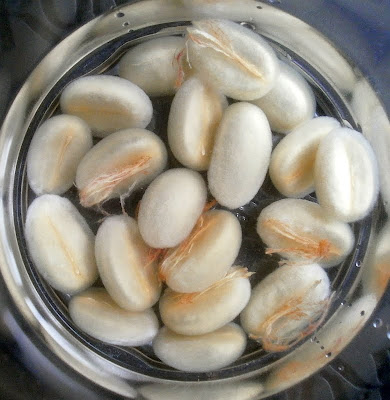 A lot of the seeds had some stringy bits attached; I don't know what it was, but it ran in between the two seeds in each fruit, and because the seeds were really slippery (also similar to the inside of a grape), I didn't bother trying to get it off of them. It came off after they soaked anyway.
After two days, I washed them off again (losing one seed down the sink drain in the process). The next step is apparently to let them dry, out of direct sun, for eight weeks, so nothing further will happen until 19 February. 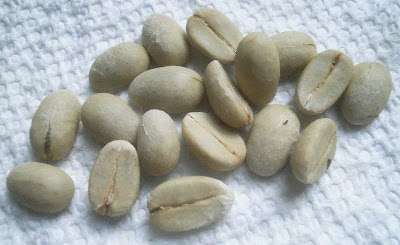 The seeds stuck to the paper towel when I put them on, and some of the paper towel came off when I pulled them free so I could group them together for the picture. It looks like fungus, but it's not. Just so you know.
On 19 February, I get to pre-soak them in water again for 24 hours and plant them in damp vermiculite on the 20th. If any of them are going to germinate, they should do so somewhere between May 1 and late August, though a lot of people report very low germination percentages. I'm trying not to get my hopes up. This all feels like an awful lot of trouble to go to (If I want more small Coffea plants, they're easy enough to find, and not terribly expensive.), but . . . well, actually, I don't have anywhere to go with that: it's just an awful lot of trouble to go to.

This is all based on the recommendations of a page I can't find anymore, and may or may not be the best way to do this. It's apparently more standard for people to separate the seeds from the fruit, clean them up, and plant them more or less immediately. I'm going the long way around partly because the person who recommended this way said that they got better germination than the people who do it the other way (many of whom complained that they don't get much germination at all). We'll see.

You unfortunately didn't have enough seeds to take advantage of the law of large numbers but it would have been interesting to plant some immediately and some after your above process then compare germination rates. Knowing nothing about coffee myself I ignorantly expected the seeds to be dark brown!