I've said that it would be nice if the plant collection would do something exciting and special to make it up to me for all the crap it's been putting me through lately. I'm not sure this counts, because it isn't quite clear what's happening, but: 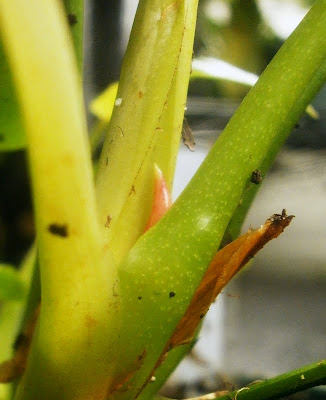 That sure looks to me like it's trying to grow a flower.

Some of the Anthurium seedlings have been producing new leaves that are red or red-brown, and a few of the others have new leaves which are green with reddish main veins (which is sadly temporary). Often, the cataphylls are also reddish, if the leaves are. So in theory, this could be a leaf. I don't think it is, though, because 1) none of the plants producing the colorful leaves have ever done pink before, and 2) even if they had, "Betty Larsony"1 has always produced plain green new growth. Whatever this is, for good or ill, it's something new.

According to the records, "Betty Larsony" was started on 27 January 2012, so if it is producing a flower, it's doing so when it's just over a year old. This is way, way earlier than I'd been led to believe was possible: most of the stuff I've read on line says that they need at least three years to produce flowers. Either Betty's not on the internet, or this is all an elaborate prank because the Anthuriums feel I haven't suffered enough. I'll let you know.


1 I've explained previously that I'm giving the seedlings all fake cultivar names, derived from the worlds of drag and roller derby, for no good reason except that it amuses me to do so. #58 happened to get "Betty Larsony."
Posted by mr_subjunctive at 3:00 AM

For your sake, I hope it's not a prank that the seedlings planned. For my sake, I totally hope it is. Because that would make them awesome seedlings.