Occasionally, when I'm trying to find an old blog post, I run into other things along the way that aren't what I was looking for but make me think oh, I should say something about how that turned out. But then I don't do that, because the idea only occurs when I'm in the middle of writing something else. But today is the day, because I don't have any great ideas at the moment for writing anything else. So, here are some follow-ups on the posts from February, January, and December:

The buds are still there, though they're not growing very fast, there aren't any new ones, and the ones there are haven't opened yet.

Betty was just messing with me. I am not 100% certain, but it looks like the pink thing I thought was maybe a flower was actually just a cataphyll that was more strongly colored than the plant normally produces. Oh well. It kinda did seem too good to be true.

The Spathiphyllum seedlings are beginning to look like Spathiphyllums, a bit. Slightly bigger leaves, and more leaves. Even getting some of the sunken primary veins going. 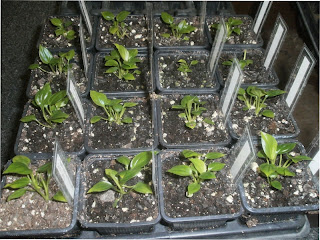 As with children, it turns out that Spathiphyllums are a lot more interesting, likeable, and adorable when you've made them yourself. I'm checking up on them all the time, I get excited when I see that they're growing, I'm trying to cross the parents so I can have even more, etc.

It's been eight weeks since I took the Coffea seeds out of their fruits and soaked them in water, so I have planted the eighteen seeds from that batch in vermiculite and am trying to germinate them in the basement, as of Monday night. A second set of nine seeds soaked in water for one day, dried for five days, and then soaked in water for one day again. I'm just checking to see if drying time really makes that much difference.

The Gasteria seedlings haven't rotted out yet, which is exciting all on its own. They're also up to two or three leaves apiece. 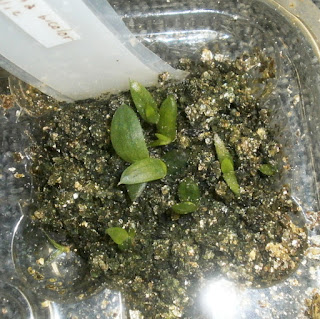 There is one item of good/bad/good/bad/good news, however: the Gasteria seedlings are still alive, and have grown more leaves, which is good. But the container is overrun by springtails (visible in the image as gray specks on the surface of the leaves), which is bad. Though the Gasterias have not already been devoured by the springtails, which is probably a good sign that they won't be. Then again, this is more springtails in one place than I've ever seen in my life, so: bad. But it's at least let me get the very largest and clearest picture to date of a springtail, which is somewhat good. 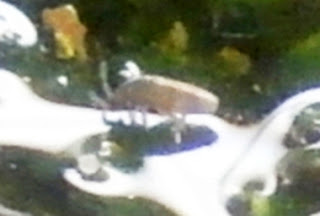 The Osmanthus fragrans got moved to a cool, bright location (in the plant room), but it was too little too late, apparently, since it completely defoliated. And then the stems dried up and became brittle enough to snap off. And then the trunk went too. It seemed pretty dead, so I threw it out.

What with the spider mites (when just after it first arrived), the lack of new flowers (all last summer), and not having a suitable place to overwinter it, I'm thinking Osmanthus is just not something I'm able to grow at the moment.

Haemanthus albiflos, on the other hand, has been doing okay for me. It dropped some leaves when it first arrived, which concerned me, but it's apparently settled in well enough, because it's produced one new leaf for me (furthest right in the photo). 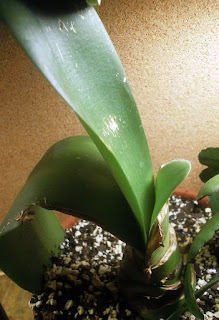 It's not amazing or anything, but it's a bit of a relief. I'd been a little worried about it. It wasn't the most auspicious time of year to be shipped.

I feel the need to defend the Osmanthus against your implication that it arrived with spider mites (and thus caused all your recent infestation misery). As you know, I went crazy and bought 18 plants, one of which went to you. I have 15 left and not a single spider mite on any of them. Nor, for that matter, do I have any spider mites on the 50+ potted plants crammed into my sunroom. I find it very difficult to believe that only one Osmanthus of the 18 had spider mites, and that that one went to you.

Of the 18 plants I bought, three were given away and all three have died from lack of attention (e.g. watering). This brings to mind something that a neighbor (and former past president of the Friends of the National Arboretum) told me once: "Stolen plants do best." The point being, I think, that when you give a plant to someone who didn't desire it madly, things will not turn out so well. Lesson learned!

Did you get a chance to taste one of your raw coffee beans? How'd you like it? My office trees are starting to flower again already! I'm a little shocked, I just harvested the last of the beans in December!

I didn't mean to imply that you'd sent it with spider mites (and the phrasing has been changed to avoid that implication); I'd looked it over when it arrived and it seemed fine. At the same time, the first location I'd tried it in (east-facing window in the living room) was apparently too hot, because the first time I checked it to water after it got here (which would have had to have been within two weeks of its arrival), it already had quite a population of mites going.

Even if it had arrived with its own entourage of spider mites, that couldn't have started my recent infestation misery, since as you know the recent misery has nothing to do with spider mites and everything to do with scale, fungus, and thrips, none of which were ever spotted near the Osmanthus.

It's not like I didn't try, you know. Officially, it was here from March 19 to February 15, so I did manage to keep it alive for ten months at the very least. Maybe eleven. And it was producing new growth while I had it outside during the summer. It never seemed to be happy when it had to be inside the house, though.

I didn't taste the seeds, 'cause I wanted to have as many of them as possible to plant. I did taste the fruit, though (described in the linked post), which was disappointing.

My plant is also producing buds again, though it started recently enough that it'll probably be a while before I have a new batch of berries. Maybe removing the berries triggers the plant to flower?

Whew! Thanks for the clarification! I'd forgotten what kinds of infestations you had; I vaguely remembered that you'd had every plague known to plantdom.

Also, due to the early hour and the paranoia that you thought I'd introduced spider mites to your collection, I failed to catch the redundancy of "former past president." I may have to resign my title of Grammar Policewoman.