I know a lot of y'all hate snow, but I am going to miss it so much when it's gone. I'm not a fan of slush, of course, because . . . well, I don't think I need to defend that, because who likes slush? And I acknowledge that snow is dangerous to walk or drive on, and that it's frequently accompanied by unpleasant cold, and all that. But snow is just so neat. 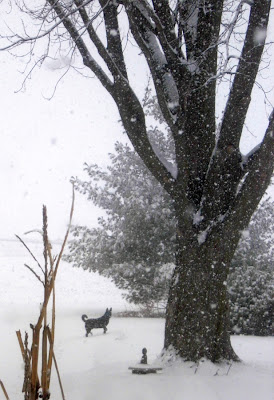 This particular snowfall happened on 18 March, and was an unusually heavy, sticky, wet snow. Not my favorite type, necessarily, but I'm happy to take anything. (It was gone within a couple days anyway.) It's looking like Eastern Iowa may be clawing its way out of last summer's drought, though officially we are are still "abnormally dry" and a couple inches short of normal. Our long-term forecast for this spring is warm and wet, which potentially means thunderstorms and tornadoes, my other favorite kind of weather, so I'm keeping my fingers crossed.

I suppose I should probably mention the dog in the photo at some point.

Sheba's doing fine. The ear infection went on forever, but seems to have cleared up finally. Or at least her ear doesn't smell terrible anymore. Hopefully those are the same thing.

She's still getting hot spots, off and on. This is irritating to all three of us, but it doesn't seem to have much to do with whether or not she's taking the Benadryl, and in any case it's been harder to convince her to take them. So long as it's just one, every once in a while, I think we're all just going to have to live with it. Everything else seems to be fine.

Nina says hello. The terrarium is still in shambles from the last batch of crickets, and it looks like possibly the Episcia is on its way out, but it's been clear for a while that eventually the terrarium was going to fill up with Begonia 'Tiger Kitten,' so this isn't the most surprising thing in the world.

EDIT: I have elected not to completely disable anonymous commenting for the moment; instead we're going to go with captchas for a while, to see how much that cuts down on the spam comments (if at all). Or at least that's the plan. One of the quirks of Blogger is that I apparently can't see the captchas when signed in, so I'm not sure whether that's actually happening now or not.

If the captchas don't solve the problem, then we'll move on to disabling anonymous commenting entirely, but hopefully this will be enough.

Great shot of Sheba. Looks like she enjoys the snow, too!

This scene reminds me of walking my dog in the snow when I was a boy growing up in the 70s. Even though the snow is pretty, I have to admit that I am a bit weary of winter. We're prepping the garden now for Spring planting.

Nice snowy scene!
Looks like Sheba likes the snow, too!
Rain and more rain here in Mississippi, but I'm not complaining. We need all the moisture we can get.
Lea
Lea's Menagerie

Thanks for adding the captcha option for us anonymous commmenters. :)

The good news is that it seems to be working so far. It's been roughly 12 hours since I set it to do the captchas, and so far there have been exactly zero spam comments. So everybody wins! I guess. Except the people who hate filling in captchas.

I don't hate snow or maybe I will hate. Because I've never touched snow before.

Spam comments have been horrendous lately, I wonder what's going on? I get one at least every few hours now, and I don't even run a popular blog. I hope the captchas help, I've been reluctant to add them back personally, as I had been told they annoyed people to the point of not commenting at times. I don't find disabling anon commenters a fair thing to do either though. You'll have to update us on how it works out for you, I may be forced to do the same.

More importantly, I love pictures of snow, and looking out the window and seeing snow, but it's that freezing weather that I just could never take that made me bitter about living with it. I may visit it again someday but I'll never shovel it again, never!