I am pleased to report that there has been a breakthrough in the whole camera-uploading-photos-to-dumb-locations business. The overall situation is still not great, alas, but that much has been settled, and this gives us hope for the future. Except where it comes to the scale-and-caterpillar part of the future, because my optimism has limits.

I do, at least, now have pictures of one of the caterpillars. (Not sure how many there were total, but it was in the neighborhood of ten.) 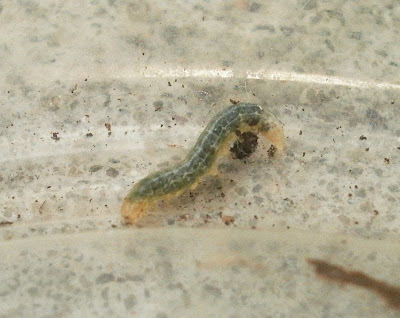 I'm getting used to a new monitor, so I'm not sure what kind of color fidelity I'm going to end up with -- how do people use LCD monitors? If you sit up slightly straighter, the whole screen changes color. Am I just going to have to get used to sitting very still? -- but you can surely get the general idea from this; it's not like my color fidelity has ever been very good in the first place. 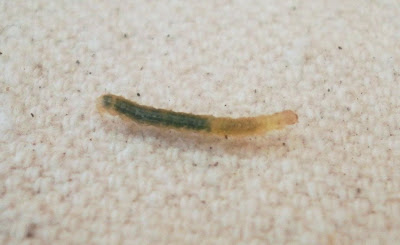 As far as I can tell from the pictures, the caterpillars are more or less colorless on their own; they turn green when they eat green things.

It has not escaped my attention that the caterpillars bear a passing resemblance to the ones I found in the potter wasp nests, back in July. I mean, I don't think they're the exact same species, but they're roughly the same size and seem to have a similar overall shape, so it's possible that they're in the same family. As if I could feel any worse about the whole potter wasp thing.

Anyway. This is what they do to Episicas: 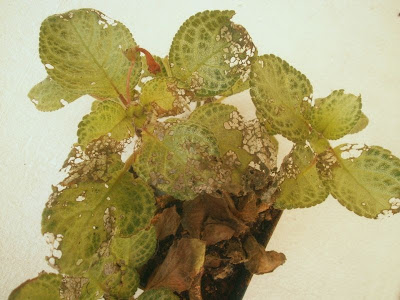 Or at least mostly what they do to Episcias. They also leave droppings (called frass) around, some of which get stuck in the hair on the leaves. So even the leaves they leave intact wind up looking worse.

While the potter wasp's away, the caterpillars will play ...

If it's alive and you can see through it, eeeeeeeeee! That's super creepy. (As opposed to say, shirts, which I like to be see-through.)