Question for the Hive Mind: a new bug

The problem is that I don't actually know what new bug I have, nor how to make it go away. So I'm asking y'all for thoughts.

It seems exclusively interested in Aglaonemas, and only two or three varieties of Aglaonema to boot.2 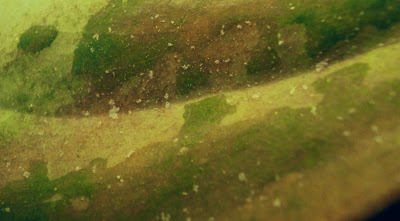 The overall orange/red tint to the photo is because of the light source I was using, and is not the actual leaf color.
The dust hypothesis didn't actually make that much sense, because it was only ever on certain specific leaves, and was sometimes accompanied by weird brown-orange discoloration at the leaf margins. 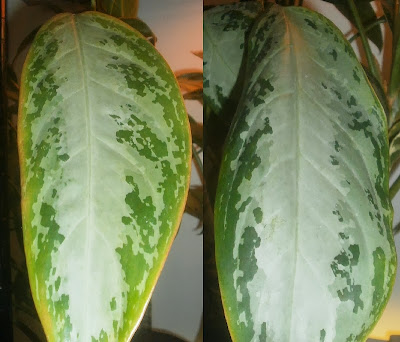 When I tried to find an unaffected leaf for comparison purposes, I noticed that all the leaves seem to be doing this to some degree or another, but I think the picture above gives the general idea. They all eventually wind up looking like the leaf on the left, but are supposed to look more like the leaf on the right.
I don't know why the margins would be discolored, though, as the bugs seem pretty evenly distributed across the whole upper surface of the leaves.

There were also frequently sticky droplets of something or another. The droplets didn't alarm me terribly, because a lot of my Aglaonema varieties produce sticky droplets on the outside of the spathes when they produce flowers, and I first noticed the "dust" as the first affected plant was flowering. I'm still not 100% convinced that the droplets are related to the bugs, actually.

It doesn't seem to be particularly harming the plants, aside from the marginal discoloration, and the margin thing has really only been going on with 'Emerald Bay.'

So why do I think there's even a problem? Because I checked the leaves out with the microscope. As usual, getting decent photos with the microscope is nearly impossible, so forgive the quality, but you can see a couple mite-like things in the center of this photo, a relatively in-focus third one just above and barely to the right of those, and pieces of blurrier ones here and there around the periphery of the photo. 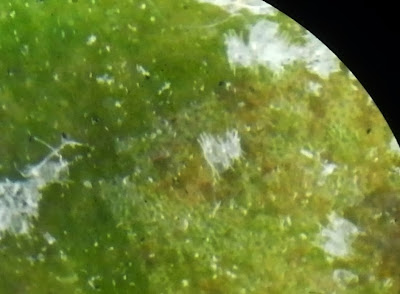 Which, it looks like an arthropod, not an insect: blurry though the picture is, it's pretty clear that they're holding four legs in front of the body, and either one or two pairs behind it. Plus there's that overall tick-/ mite-shape going on.

Obviously there are many, many species of mite, but the only ones I know of that make a habit of attacking houseplants are the two-spotted spider mite and the cyclamen mite, and I don't think these are either of those two species. Under the microscope, spider mites are 1) much larger, 2) yellowish and opaque, instead of translucent white, 3) inclined to stay mostly on the underside of leaves (these mites are almost 100% on the upper leaf surface), 4) detectable by the visible webbing they create, and 5) will move while you're looking at them under the microscope. I've never directly observed cyclamen mites under the microscope, but the pictures that come up in Google are of rounder, smoother creatures with stubbier legs. Cyclamen mites mostly look like white jellybeans, as far as I can tell, which these do not.

It's conceivable that I'm actually seeing the dead skins left after the mites molted.3 That's happened before, with the deep-sea crab/skeleton/spider/ghost things (probably actually aphids) I talk about at the end of this post, and would explain the translucent whiteness and lack of movement. I am also willing to entertain the possibility that my Aglaonemas are being haunted by the ghosts of deceased spider mites, because that likewise explains the translucent whiteness and makes about as much sense as anything else.

Of course I've Googled. There's plenty out there about spider mites and Aglaonemas, but nothing about any other kinds of mite.

So far, I've tried imidacloprid (when I was putting imidacloprid in all the plants), which definitely did not get rid of the infestation, and wiping the leaves with rubbing alcohol and a paper towel, which I did too recently to know about its effectiveness. (My guess: yeah, it'll probably work, but I'm going to have to do it several more times.)

So what about it? Anybody seen anything like this before? Have any suggestions for what I could do to find out what I've got, or how to make them go away? Suggestions for dealing with spider mite ghosts are especially welcome, since Google is as silent on the topic as you'd expect.


1 Side note: it's a little peculiar that he's asking for "one that makes me feel like I feel when I'm with you." 'Cause, you know, if you've got that in drug form, then you don't actually need the girl anymore, right? I mean, wouldn't it make more sense to just spend a lot of time with her, since she already exists and makes him feel exactly like he feels when he's with her, rather than asking the world's chemists to go to the trouble of inventing a whole new drug with these super-specific effects? I think about these things. Maybe Huey Lewis should too.
2 Almost all of it has been on 'Emerald Bay,' which is in my office. Also affected: 'Golden Bay,' 'Diamond Bay,' and 'Brilliant,' all of which are in the living room. 'Gold Dust,' which sits right next to 'Emerald Bay,' and has been for quite a while, doesn't seem to have the problem at all, though.
3 If you're into video of spider mites running around and molting -- and who among us isn't? -- check this out:

Labels: Aglaonema, Huey Lewis and the News, microphotography, question for the hive mind

I DO know of a way to deal with the ghosts of spider mites (and it might help with the scale, too). Did you hear about the vial of Pope blood that was stolen recently? You're going to need that...

Did you check out Google photos for dust mites? They could be what you're seeing, perhaps. If so, the brown leaf margins would stem from some other cause (I think). A case of cause and effect being mistaken. All a guess.

I had a similar thing in my house once. I kept wondering how the desk was so dusty. I looked closer and noticed they were on *everything* within 6 feet of the desk where my strawberry plant was. They were absolutely tiny, and were white and translucent when i looked closer. I thought I'd gotten rid of them (wiped down plant, inspected it, torched the metal desk and wiped it down, sprayed area with lysol) and took my strawberry to work where it eventually died. After it died, I found more of the infernal bugs. I have never seen them since, even on my other dozen potted plants.

IF this is what they are, what they like about the Aglaonemas is beyond me! You might need to send your information here http://www.ars.usda.gov/Services/docs.htm?docid=9353 to get to the bottom of the mystery.

I've seen this before extensively in hot, dry areas which made me come to the conclusion of spider mites. I used predatory mites and knocked the infestation down to almost nothing. New leaves clean and perfect until the next winter when humidity dropped and mystery mites came back. Time to reapply predators and confirm my initial diagnosis.