But this year, hey, finally a flower: 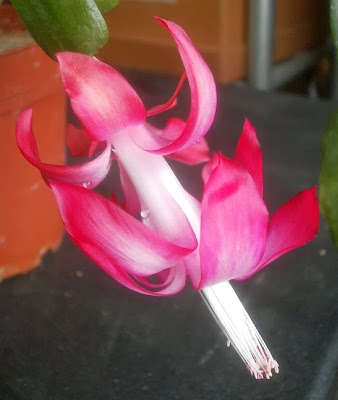 There might even have been two. (I'm writing this on 23 December, so I don't know how the other buds fared.) So what changed?

Well. In 2013, shelf rearrangements led to this particular plant being on a shelf about 2 feet lower than it had been previously. That's all that changed, as far as I know, but it seems to have been enough. It wound up further away from one source of artificial light, if only slightly, and a second source of artificial light was blocked by a bunch of too-tall-for-the-shelves plants next to the shelves. Plus, being closer to the floor meant it was a lot colder. Colder + darker = blooms. Apparently. So it can be done.

UPDATE (2 January): I think it wound up just being the one flower. Maybe two. I didn't keep as close of a watch as I probably should have.

Last year in january I got some bloomless half alive Schlumbergera plants that were one third of the original plants. This summer they got their share of sun (turned red), rain (on of the plants split into two - roots rotted) and other abuse. In june they found permanent home in a shelf by the window (in september they were outside to induce blooms forming) and hey - in november i got a lot of flowers in all of my plants. All white. One plant produced white flowers with heavy red hue - the one that lives right by the window and gets a lot of cold autumn air when window is open.
I plan to get my hands on more colours and I will repot white flowering variety to one pot with heavy pruning and cuttings it should look awesome.
Long story short - glad you got flower(s) on your plant :).

I have a bloom-shy hylocereus (Night Blooming Cactus). It’s a forest dwelling cactus, and the Schlumbergera genus has a similar habitat, though the latter is probably adapted to higher elevations. I’m wondering if coolness signals the hylocereus to flower. Mine has flowered before, but such occurrences are infrequent. It is presently outdoors, in the ground, climbing on a tree. It is shady there now, but the tree will loose most of its leaves by February (I’m in Bermuda). Any idea why it blooms so sparsely?

I always found day length to be the most important variable in getting these to bloom. Several years ago I even had three different plants bloom and them, they made fruit, i got tiny seedlings, then some busy body cleaned up the house and they disappeared. Passed me off royally.

Really don't have any theories. I don't have much experience with Hylocereus in general, and none at all with epiphytic cacti outdoors. I do know that some species are just naturally more inclined to bloom than others, so it could be that you have one of the shier types. Fertilizer, water amount and timing, light intensity, etc., are all possible explanations too.

Congrats on getting it to bloom!

I failed this year, wasn't disciplined enough with keeping the lights off in the bedroom. But oh well, there's always next year.

I was just logging on to excitedly tell you that the plant I got from you is blooming...and now I see yours is too! Mine has one bud open and another tiny one...we'll see if I get two out of it.

In Texas we call this plant the Christmas cactus, and it is common here to put it in the closet for some time just like poinsettias to force color for the season.