Just picking up from the previous update: the Hippeastrum has bloomed. I got two flowers, both of them solid red, though they looked very orange-red right up until opening (and still look a little orange in some lighting). I don't know that this is going to turn me into a Hippeastrum devotee or anything, but they're self-fertile, and you know how I get with seeds,1 so this will probably not be my last amaryllis.2 This one was started in March 2010, so that means basically four years from seed to bloom. I have no idea if that's typical for Hippeastrums. 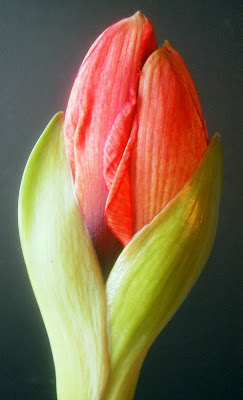 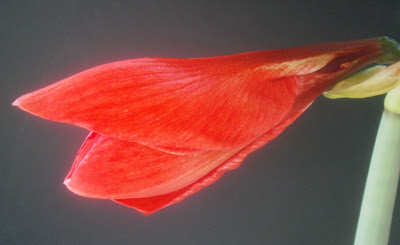 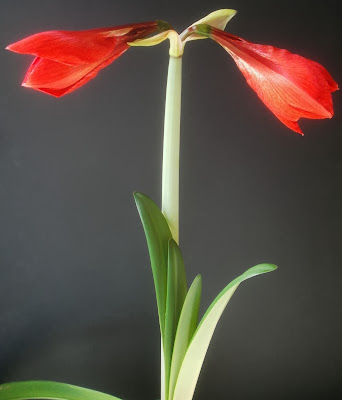 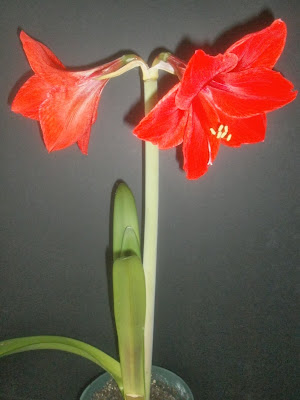 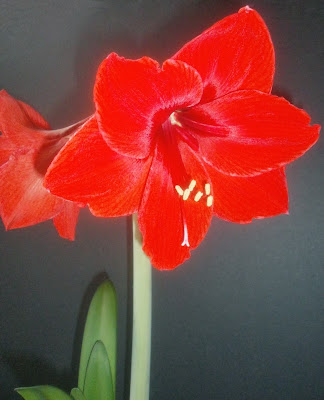 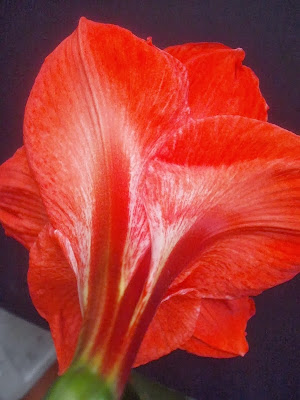 I don't know whether the white streaking on the back of some of the sepals here is normal for Hippeastrum, or an indication that there's some 'Apple Blossom' ancestry in there after all, or something else, but it seemed worth mentioning.

Less happily, about ten hours after "An Uncharacteristically Upbeat Post" published, I found the Euphorbia fungus on a plant that I thought had been cured, and then discovered it on at least three more plants that week. You'd think I would have learned by now never to think (much less to say) that any of my problems has ever been resolved.

Though shutting up about my problems doesn't seem to work that well either: the itching is still happening, albeit not as often. I've been using petroleum jelly after showering for about six weeks now, and although I'm not itching as often, I'm still itching. It's just that now I have maybe two bad days per week, instead of three. The itching is a little less life-consuming when it does happen, as well: shorter duration, responds better to benadryl. So there's been improvement on that, but less than I'd like. The next step in the process would be a referral to a dermatologist; so far I've declined to do that because 1) it's gotten somewhat better, and 2) my expectation is that seeing a dermatologist is a lot less likely to result in a cure for the problem than it is to result in more visits to a dermatologist. Nothing against dermatologists: I'm sure many of them are very nice people who are highly competent doctors. I just don't think this problem is a dermatologist kind of problem.3 If it gets worse, I'll reconsider.

Finally, just an update on the Cyperus alternifolius (original post from last July here), so I don't have to end the post on such a down note:

The third cutting did eventually sprout; it just took a really long time. It caught up to the size of the other two pretty quickly after I potted it up, which was surprising. I've since put all three together in a single pot (mostly for space-conservation reasons; I'm pretty certain the plants would have been fine where they were), and the resulting plant looks like this now: 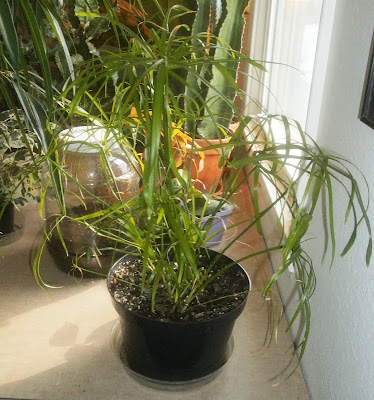 So far, I'm pleased to make its acquaintance. It's been a while since I met a new plant that I got along with this well, actually.


1 There will be at least one more seedling-related post coming relatively soon, though in a surprise twist, it won't be about Anthuriums. And I'm pleasantly surprised and happy about it anyway.
2 "Amaryllis" is the common name for Hippeastrum even though there's a genus called Amaryllis. Much like the way "pothos" is Epipremnum and not Pothos, "nephthytis" is Syngonium and not Nephthytis, or "coleus" is Solenostemon Plectranthus and not Coleus. Even when common names are scientific names, you still can't trust 'em.
3 So what kind of problem is it, then, if not a dermatologist problem? I don't know. Maybe it's a ghosts-of-dead-spider-mites problem.
Posted by mr_subjunctive at 3:00 AM

Gorgeous Hippeastrum! One of mine has quite a tall spike; I'm hoping it'll pop any day now. The other one will be a few days or so behind.

I don't have any good photos of these plants' parent's flowers' behind, so I can't say whether there was any white streaking on the back or not.

Also, happy VD! Which, if taken out of context of the day on which I'm commenting, is something I'm hoping isn't causing your itching.

I've never commented on your blog before, but I've been reading it for years. Might as well start participating now! Very nice Hippeastrum, it makes me think that I have room for one myself.

I'm just about ready to start my Cyperus seeds. I wonder if they'll grow as fast (or slow, depending on how you look at it) as your cuttings? I guess time will tell.

I hope you don't mind my giving advice on dry skin (if that is indeed what you have). I have a disease called sjogrens which kills off all the moisture-producing glands in my body, and am therefore an expert in managing dryness. I can attest to the fact that dry skin will cause itching that is the more miserable than anyone could imagine.

Vaseline is an anit-chafing type of substance, and is most properly called a "lubricant" (like putting WD40 on a squeaky door....it sits on top but doesn't soak in). It will NOT heal your skin on it's own. Then there are the "moisturizers", which are vastly different than lubricants. They soak in and help heal the skin....the downside is they usually only work for a short period of time (an hour or so) before you need to reapply.

You MUST use a combo of both lubricants and moisturizers if you're going to heal the skin!

Here's what to do: try not to take showers everyday, and keep them short. If you can stand it only use warm water and not hot water (less drying). When you get out of the shower pat dry your skin and slather on a MOISTURIZER....this can be a heavy lotion like Curel Ultra Healing (my favorite), or a natural oil such as coconut or vegetable oil, or sweet almond oil which has no scent. Baby oil is irritating because of it's scent. Let the lotion or oil take about 10 minutes to soak in.

Then go over it with your lubricant, such as Vaseline, or Aquaphor (which is my favorite because it contains a bit of oil in there already). Give that some time to soak in.

At first you may need to do this twice a day for about two weeks to achieve full healing. If it works, you can begin to back off and reapply on a schedule that maintains your skin's balance (I have to do it twice a day everyday, always). You might be able to stop it entirely in the summer when there's more humidity.

If you do all this and there's no relief, dry skin is probably not your problem. These steps have been a miracle for me, and I hope they help you!

One more tip.....if it's your scalp that itchy, there's an easy solution for that too. Use a natural oil as a moisturizer (olive oil, almond oil, etc....put it liberally on your scalp before bed. Put a towel over your pillow so it doesn't get all over, and sleep with it on. You're going to wake up with a shockingly bad hairdo, but just take a shower and wash with a gentle shampoo. Do this for a couple days until the itching stops....then you can do it maybe once every two weeks or even once a month. It works like magic if dry scalp is your problem. For the love of all that is holy, do NOT put a lubricant in your hair, like Vaseline. NO! Just a natural oil.