I realize that I just posted about Huernia oculata a month ago, and it wasn't that interesting then either, but not much is going on with the non-Anthurium plants lately. This is also the first bloom I've seen on this particular specimen of H. oculata, which presumably makes it at least a little newsworthy even if it isn't fully open yet. 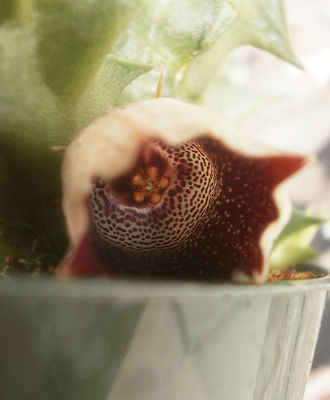 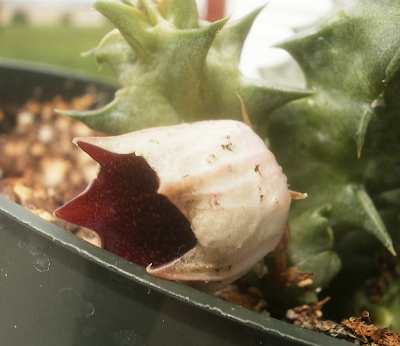 On an unrelated note: when we first moved to this house, I had bought a bunch of plants from the ex-job. Planted most of them in containers, because we didn't have beds established yet (and, five years later, we still mostly don't, though we're working on it), and I remember being struck by one color combination in particular -- Geranium 'Rozanne' (blue-violet) and some unnamed red-orange Zinnia. (See the last picture on this post.)

I'm wanting to do something like that again somewhere, eventually, though maybe with something more of a true blue and true orange. Would anybody want to recommend some plants for me? Ideally, they would:

1) Be reseeding annuals (preferred) or slowly-spreading perennials, that
2) bloom at more or less the same time (ideally over a long period of time),
3) either aren't fussy as to soil type or could live together in the same soil type, whatever the ideal type might be,
4) could coexist for a reasonably long time without one crowding or shading the other out,
5) would survive a very windy, bright location in zone 5b.

I tried Lobelia once but didn't have much success (I think I let the pot dry out) but I am experienced with orange Zinnias and Tagetes and have been quite happy with both of those. I plant Zinnias near my tomatoes to help attract pollinators. They are one of my go-to annuals.

I don't think of Eschscholzia as long blooming but I've never grown them in the garden. I've just seen them in the wild.

As far as blue - you could try Scabiosa Butterfly Blue. It's a short lived perennial that blooms from early summer/late spring through frost or even a couple of frosts. Unfortunately it often quits performing or even dies after 3 or 4 years. It is well behaved in the garden and does not spread. I've never tried growing it from seeds, I always remove the spent blooms to increase future blooms.

Another great orange blooming flower that you might try is Tithonia. Be warned - it gets really, really big but it is GORGEOUS in full bloom. I bought some seeds this year but while I was trying to get them adjusted to outside temperatures and light this week the container blew off the deck and turned over. I'm not sure I'm going to be able to salvage them. Dammit.

I can't imagine how my favorite reseeders will perform in your climate but I'll share them anyway. Blooming together now are Larkspur, California Poppies and Corn Poppies. In my experience Eschscholzia blooms a long time, Papaver rhoeas and Consolida species bloom long enough to make them worth having. Mine are followed by Tithonia as mentioned above, a butterfly magnet for summer beds. There are dwarf forms but I like the big stuff.

I almost forgot Verbena bonairensis, tall as I but makes a lovely scrim in front of others. Silene armeria is great if you like hot pink -- I plant it to bloom where we wait for tropicals to emerge.

Ratibida columnifera is somewhat of a thug here, might not be in a cooler clime, but its 'hats' are a sight to behold. Sometimes the maroon gives way to a solid yellow that is charming.

We both have Huernia news - that's exciting!

To get the flower/color combos you want in the garden, you'll probably have to use multiple plants with varying bloom times. It's hard to find blue flowered plants that can last all summer. Nigellas are gorgeous, but here they're gone by June. I have a blue Penstemon that's beautiful right now but won't be blooming into summer. Orange is much easier to find plants that will bloom for months (although poppies here are spring blooming). Something as simple as a Coreopsis will bloom all summer long. That's a great quality in a plant.

I know our climates are very different but the idea of staggering bloom times is universal to everyone's garden.

I love the combo of blue and orange. If you expand it a little to purple, consider a Lantana for color all summer long. You can also repeat your original combo - if you loved it then, you'll probably love it again.

Good luck! What a fun *problem* to have.

I don't know how you feel about vines, but I was very happy with a pot of blue Clitoria ternatea last year. It never had a showy mass of flowers, but it did pretty much always have some, and they were definitely blue. The internet suggests it will take a wide range of soils (nitrogen-fixing legume and all). It's not frost-hardy but will reseed.