Hey, so: I am still alive, but for various reasons haven't been able to post lately.

Or, technically, I suppose I'm able to post, in the sense that no one is physically preventing me from doing so, but I've found it difficult to post. That's probably going to continue for a while longer, as I try to process another large batch of recent photos, but I haven't forgotten about you or the blog, and semi-regular non-orchid posting will resume eventually. 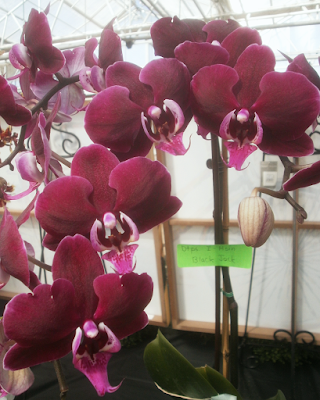 This is a very dark Phalaenopsis, but there's an even darker one coming up in February. I find myself surprisingly impressed with both. (Though while I was taking this photo, another show attendee was telling someone that they really preferred the white ones. Judging by what I see in the background while watching TV, everybody else prefers white too.1 I think this is clearly wrong, on the grounds that all white phals look exactly the same and are boring, but nobody listens to me.)

And yes, I see that the tag has this identified as a Doritaenopsis, but neither Doritaenopsis nor Doritis even still exist, officially, so I fixed it.


1 Since about 2010 or so, white Phalaenopsis have been taking up more and more "TV houseplant" positions, to the point where it's currently like 80% white phals in the stuff we watch around here. A startlingly large chunk of the remaining 20% is Ficus lyrata, which seems to be having a sudden cultural revival for no good reason I can think of.
Posted by mr_subjunctive at 3:00 AM

I'm pretty sure the TV houseplants are artificial. White plants show up best against a darker background and the set decorator doesn't have to worry about the color clashing with anything else on the set.

And you're probably seeing the same artificial plant over and over since items from one set get used on another. In watching Perry Mason reruns, we've seen the same banjo clock and same ficus in almost every show of a given season.

I agree that Ficus lyrata seems to be one of the most fashionable houseplants right now.

I think the main reason I ended up deciding to buy both a Pachira and a Ficus lyrata is simply because I kept seeing so many posts about them on one of the houseplant online forums I read. I also may have been influenced by some nice photos of F. lyrata in an interior design webpage.

There's an even darker Phal coming up in *February*???

Yeah. When I get back from the orchid show, I sort through all the photos quickly and then schedule the orchid posts for the entire following year.

Partly this is to avoid posting similar orchids right after one another (the last one was a light yellow and pink Paphiopedilum; this one's a dark purple Phalaenopsis; the next one will be an orange Cattleya-type), and partly it's because I know from experience that if I try to do the posts as they come up, I'll forget anything interesting I may have noticed about them at the show. Like, in this case, you get the detail of the lady commenting that she liked the white phals, because I wrote that down while I still remembered it.

This is what creeps me out about scheduling future posts: A friend's husband unfortunately died suddenly, and his Facebook page keeps automatically posting some "photo of the day" app thing that he had set up before he died. Please make sure you stay alive and well for a long time to come if you have all these blog posts lined up.

Well, the posts aren't actually written that far in advance. Usually I don't have more than one or two actually written and set to post: I put the actual text in as the dates come around for each post.

Which I guess means I'm okay to die whenever I want to, which is less reassuring than I intended when I started writing this comment.